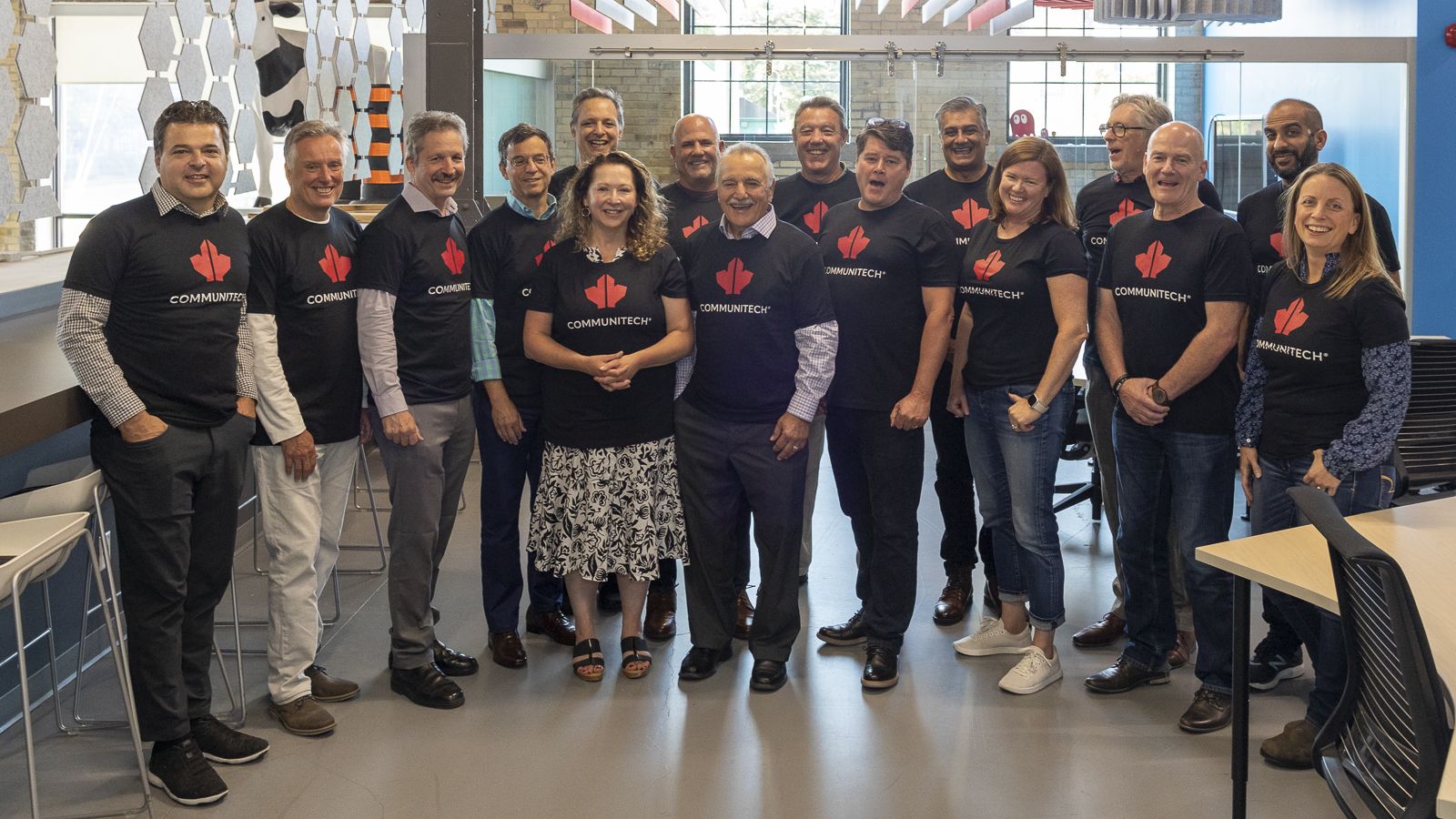 Communitech founders and board members, past and present, gathered for a 25th anniversary breakfast on Sept. 15 ( Communitech photo: Mandy Lubjenka )

After a quiet summer, the tech community went full on in September with multiple million-dollar raises, two acquisitions and several impressive milestones.

Let’s start with an anniversary. It’s been 25 years since a group of visionary Canadian tech leaders launched a support organization by founders, for founders. Communitech sprang to life in 1997 with just a handful of original members. Over the decades, it has grown into one of Canada’s most successful founder-support organizations and a model for tech associations the world over.

“Talk about standing on the shoulders of giants,” Communitech CEO Chris Albinson told a breakfast reunion that attracted many of the organization’s first backers.

The anniversary celebrations continued at Communitech’s annual general meeting, where outgoing Chair Dave Caputo handed the board leadership over to incoming Chair Catherine Graham, co-founder and CEO of workflow-platform commonsku.

During the AGM, Albinson announced that Communitech had purchased briefed.in, a data platform that tracks investment in Canadian technology companies. The acquisition strengthens Communitech’s capacity to identify and support Canada’s highest-potential companies, a key part of the organization’s True North Strategy.

Kitchener-based Avidbots, which makes a line of commercial floor-cleaning robots called Neo, announced a Series C raise of US$70 million. That would be a significant raise at any time, but it’s all the more impressive given the general tightening of VC purse strings over the past 10 months.

The new investment will enable Avidbots to expand its fleet of robotic cleaners, enhance its autonomy software and grow its sales and marketing efforts in global markets. It will also allow the eight-year-old company to hire 100 more staff on top of the more than 300 people it currently employs.

The robot-maker wasn’t the only one attracting investment capital in September. Insurance-tech startup ProNavigator announced a CDN$10-million round of growth financing that will help it open a U.S. headquarters in Raleigh, N.C. to further its expansion south of the border.

In other funding news, the Business Development Bank of Canada (BDC) announced a new $500-million fund to support women entrepreneurs and investors. The Thrive Venture Fund and Lab for Women aims to build on the groundwork laid over the past five years by BDC Capital’s $200-million Women in Technology Venture Fund.

The deal – worth US$25 million, including cash, stock and incentives – will see SSIMWAVE retain its name, brand and Waterloo-based team, which will operate as a subsidiary of IMAX.

In other M&A news, Kitchener-based IT-solutions provider Able One was acquired by Quadbridge Inc. of Montreal. Founded in 1988, Able One offers remote managed IT services, equipment procurement and professional consulting services.

While economic forces continue to hamper some segments of the tech world, the medtech industry in Waterloo Region is thriving.

Tech News took a deep dive into the region’s emerging medtech ecosystem and found that there are more than 100 health-innovation companies in the area and a growing web of expertise and support.

Communitech is playing a lead role with its Future of Health collaborative, which brings tech leaders, researchers and public-sector officials together to collaborate on ways to improve Canadian health care through innovation. In September, the collaborative issued a call for solutions to identify Canadian tech firms that offer the kind of innovations that can help overcome the biggest challenges facing our health-care systems.

More than a dozen companies with ties to Communitech made the Report on Business’s Canada’s Top Growing Companies list. Several others were among the 15 companies featured on LinkedIn’s Top Startups Canada list.

And despite turbulence in financial technology, the fintech industry in the Toronto-Waterloo corridor moved up six places, to No. 7, in Startup Genome’s 2022 global fintech ecosystem report. Toronto-Waterloo is also among the top five performing ecosystems in the performance and legacy factors, and in the top 10 ecosystems for funding and experience.

Speaking of top performers, don’t forget to mark Oct. 13 on your calendar. That’s the day Communitech brings back its popular Techtoberfest, an open house for the community of tech. In addition to plenty of gemütlichkeit, we’ll be unveiling the newest members of Team True North, a data-informed roster of Canada’s highest-potential tech companies.

Meanwhile, Communitech columnist Alex Kinsella tells us about the all-new Kitchener-Waterloo Oktoberfest, which is back in-person after two years of COVID-induced scaled-back versions. As Kinsella notes, the festival – which celebrates the area’s German heritage – has undergone some major changes over the past 24 months to broaden its appeal.

More than 1,000 students from across Canada and abroad converged on Waterloo for Hack the North, one of the biggest hackathons in the world.

As a supporting partner, Communitech was in the thick of the action. Our booth was busy throughout the weekend and our Tech News team covered an inspiring talk by tech culture guru and musician will.i.am and the closing ceremonies and finalist demos.

To get a feel for the frenzied, around-the-clock vibe of the Hack the North weekend, check out this photo essay by our own Tony Reinhart.

Our colleagues at MaRS published an article in the Toronto Star that highlights a report urging Canada to move quickly to support a domestic manufacturing industry for electric vehicle (EV) batteries.

The report, from Clean Energy Canada and the Trillium Network for Advanced Manufacturing, says Canada has the potential to build a battery supply chain capable of creating 250,000 jobs and pumping $48 billion into the Canadian economy each year.

“It requires that we build a holistic supply chain, attract and collaborate locally with reliable and proven industry participants and elevate the role of Canadian academic institutions in the basic and applied science of making EV batteries at global scale,” Guido Benvenuto, VP of Engineering at Kitchener-based EV battery parts-maker Flex-N-Gate, told the MaRS writer.

BetaKit ran an interesting story about how companies such as Shopify, which has a large presence in Waterloo, and Kitchener-based ApplyBoard are incorporating things like studio lighting, high-end cameras, crisp audio feeds and glitzy graphics⁠ for their monthly town hall meetings.

ApplyBoard took a hybrid approach to a company-wide meeting in August, blending a mix of in-person and televised remote links.

“It was an incredible feeling to have many team members gather both in-person and virtually for our vision meeting in August,” co-founder and CEO Martin Basiri told BetaKit. “The energy of the meeting was invigorating, and it allowed all team members to feel connected.”

Whatever works for you

Sticking with the new normal, MaRS published another insightful piece about how employers are grappling with return-to-workplace issues.

“Whatever works for you, works for us,” is the new mantra at Waterloo-based Axonify, according to co-founder and CEO Carol Leaman.

“Four years ago, I would have said that people are distracted at home, but the opposite has proven to be true,” Leaman told MaRS. “I love working from home, and if it means life is easier for people, then it’s not going away.”

Speaking of whatever works for you, Mississauga-based PointClickCare is expanding its Toronto-area presence with a plan to take space in a trendy urban development called The Well in the city’s downtown. The Well is a mixed-use development at Front Street and Spadina Avenue that will include workspace, retail, housing and entertainment. In a release, PointClickCare said the new space, which it hopes to occupy by fall 2023, “will offer an immersive, rich experience for PointClickCare’s hybrid workforce.”

Workplace change seems to be on everyone’s minds. Communitech columnist Melanie Baker explored some of the ongoing fallout from the COVID pandemic and its impact on workers.

In one column, Baker looked at the lingering implications of the COVID-19 pandemic on the workplace. In a related follow-up piece, Baker noted that remote and hybrid work are here to stay. Any employer that resists this new normal will likely find itself dealing with productivity and morale issues.

In a third column, Baker tackled a common lament: Why no one seems to want to work anymore. It might feel like we’re hearing this refrain more often these days, but are today’s complaints really all that new?

This edition of the Tech Roundup was compiled by Kevin Crowley. Sign up to receive the Roundup each month by visiting communitech.ca/technews and scrolling to the bottom of the page.

Kevin Crowley is a Staff Writer for Communitech News. He is a Michener-Award-winning former newspaper journalist with the Waterloo Region Record, and former Director of Communications and Public Affairs at Wilfrid Laurier University in Waterloo, Ont.
M-Theory: Why 'no one wants to work'
News home
Info-Tech Research Group names new CEO as IT firm marks 25 years