Hack the North leaves more than 1,000 students tired but inspired 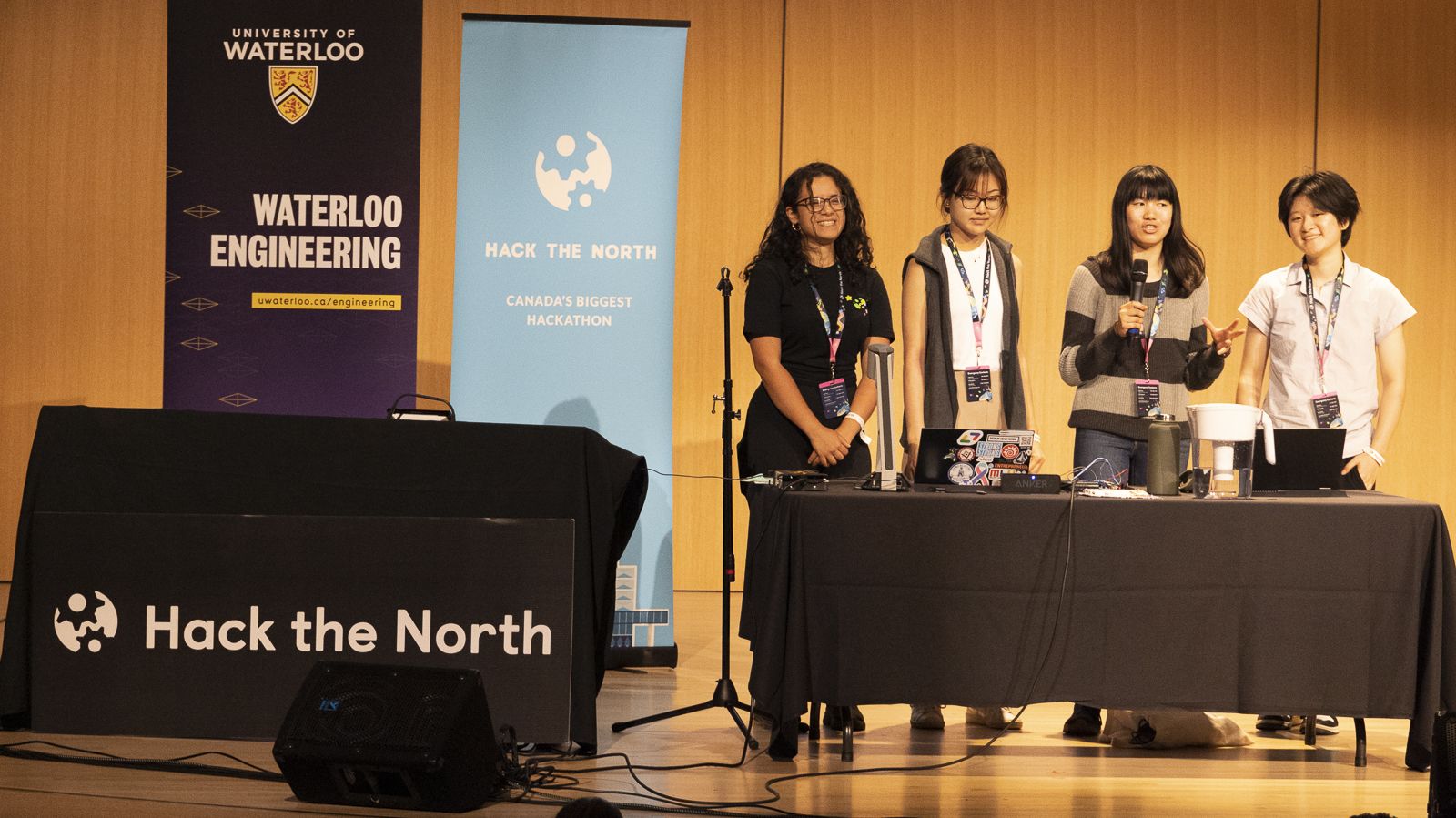 Four young hackers give a fun-filled pitch for the 'Britafull' – a sensor that scolds roommates who neglect to refill a shared water jug. ( Communitech photo: Anthony Reinhart )

Was it worth it?

That was the overwhelming sense as more than 1,000 sleep-deprived young tech wizards wrapped up a 36-hour student hackathon in Waterloo Sunday.

The computer game they created – a slick-looking bit of fun called Tempestuous Turrets – didn’t win any prizes, but the trio of friends had an awesome weekend anyway.

“It was so much fun,” said Gretzinger. “Hack the North is a great place to learn, to bond with your friends, meet new people, and even just get started if you don’t know much about tech. And the food was great!” 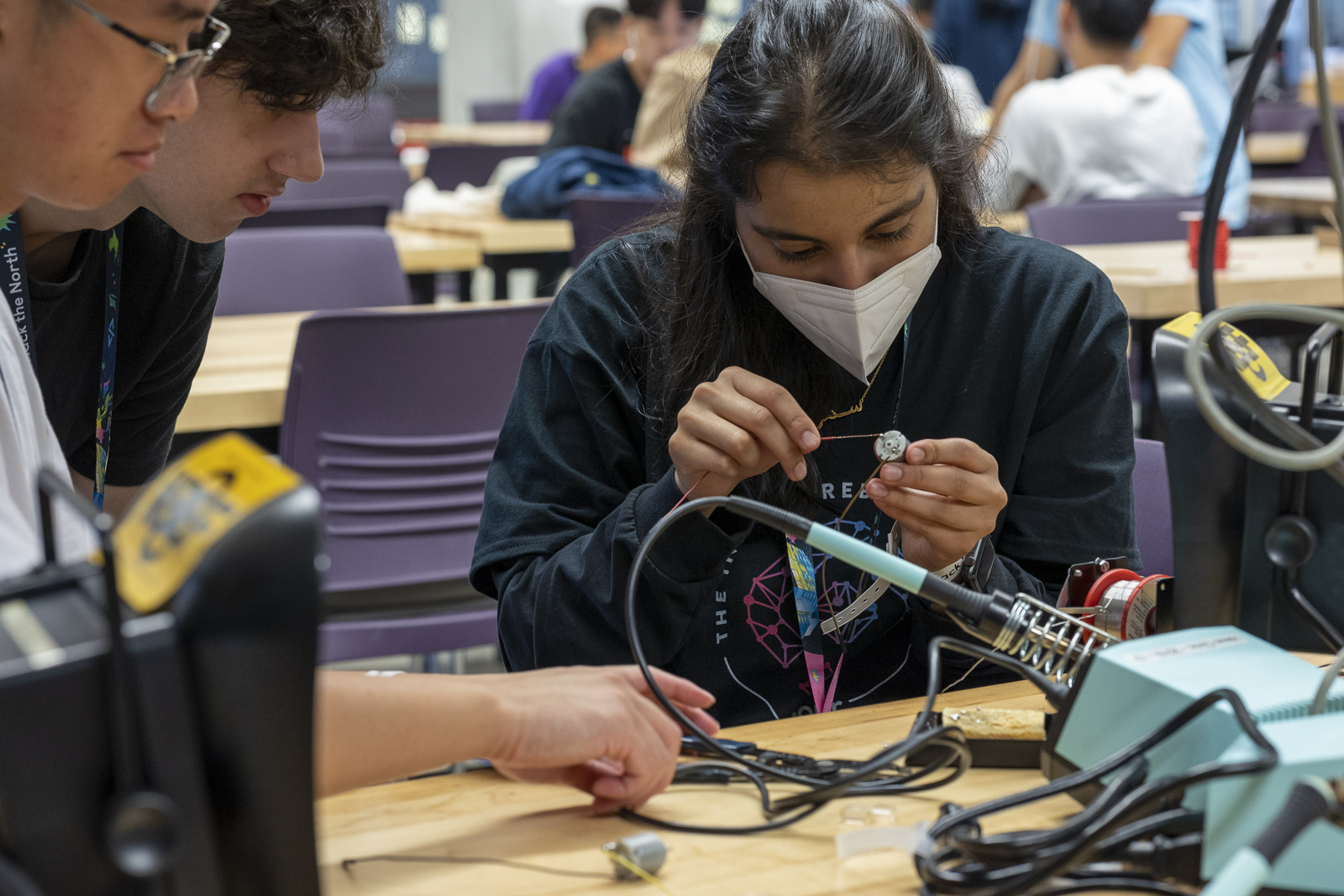 Organized by students from the University of Waterloo, Hack the North was launched in 2014. In less than a decade, it has become one of the biggest and most popular hackathons in the world.

The energy level at this year’s event was even more pumped because it was the first in-person edition since COVID struck in 2020, pushing Hack the North online for the past two years.

More than 1,000 student hackers participated, many coming to Waterloo from across Canada and around the world.

“I couldn’t believe I got accepted,” said Edwin Ngui, a Grade 12 student who bused to Waterloo from Toronto with several friends.

He and his team spent the weekend designing an autonomous robotic vehicle. One of the best things about the hackathon, he said, is the people you meet and how much you learn from professional tech mentors and from other students.

“It’s awesome,” Ngui said as he plucked a plastic wheel off a 3D printer in UW’s Rapid Prototyping Centre.

Not only did the high-schooler get help from a UW co-op student assigned to the prototyping room, he got support from fellow hackers.

“It’s a competition, but it’s a friendly competition,” said Nush Majra, a first-year mechatronics engineering student from UW who was using the 3D printer to create components for a device that enables people to draw and write using eye movement.

Hack the North is a project-based marathon in which teams of two to four “hackers” submit a project idea and then have 36 hours to design, build and pitch their creation.

The mad-dash vibe and around-the-clock frenzy leads most participants to stay up late as they work through problems and iterations, seeking advice from peers and mentors, before curling up for a few hours of shuteye in a hallway or designated rest area.

Ishpreet Nagi and his buddies from Mac stayed awake right through until the early hours of Sunday morning. That’s when they hit the wall and found a vacant bit of hallway floor to catch a few z’s.

“We were running on Monster energy drinks and determination,” quipped Nagi as he and his friends attended the closing ceremonies later in the day.

In addition to hacking their projects, participants get the chance to attend workshops on a wide range of tech topics, network with representatives from technology companies, and socialize with friends old and new.

There’s also a lot of food, healthy and otherwise, as well as lots of swag, games and fun.

“It’s not just about the hacking – it’s about bonding and meeting people from around the world,” said Yzabelle Perez, a second-year UW computer science student and one of more than 400 volunteers.

She spent a few hours Saturday afternoon outside of Engineering 7, supervising the motorized “goose racing” – a goofily fun game that involves remote-control racing cars that have a plastic Canada Goose decoy affixed to the chassis.

In a Q&A address via video link, will.i.am urged students to be creative, ambitious and audacious.

“I'm encouraging you to do what people think is impossible,” he said. “You have to be able to believe in your ability to put a team together to solve the world’s problems. And that’s what I mean by competing. There are a lot of problems to be solved, and in technology, you could aim your mind and your skill sets at solving those problems and competing with the best.”

The talk hit home with the three friends from McMaster University. 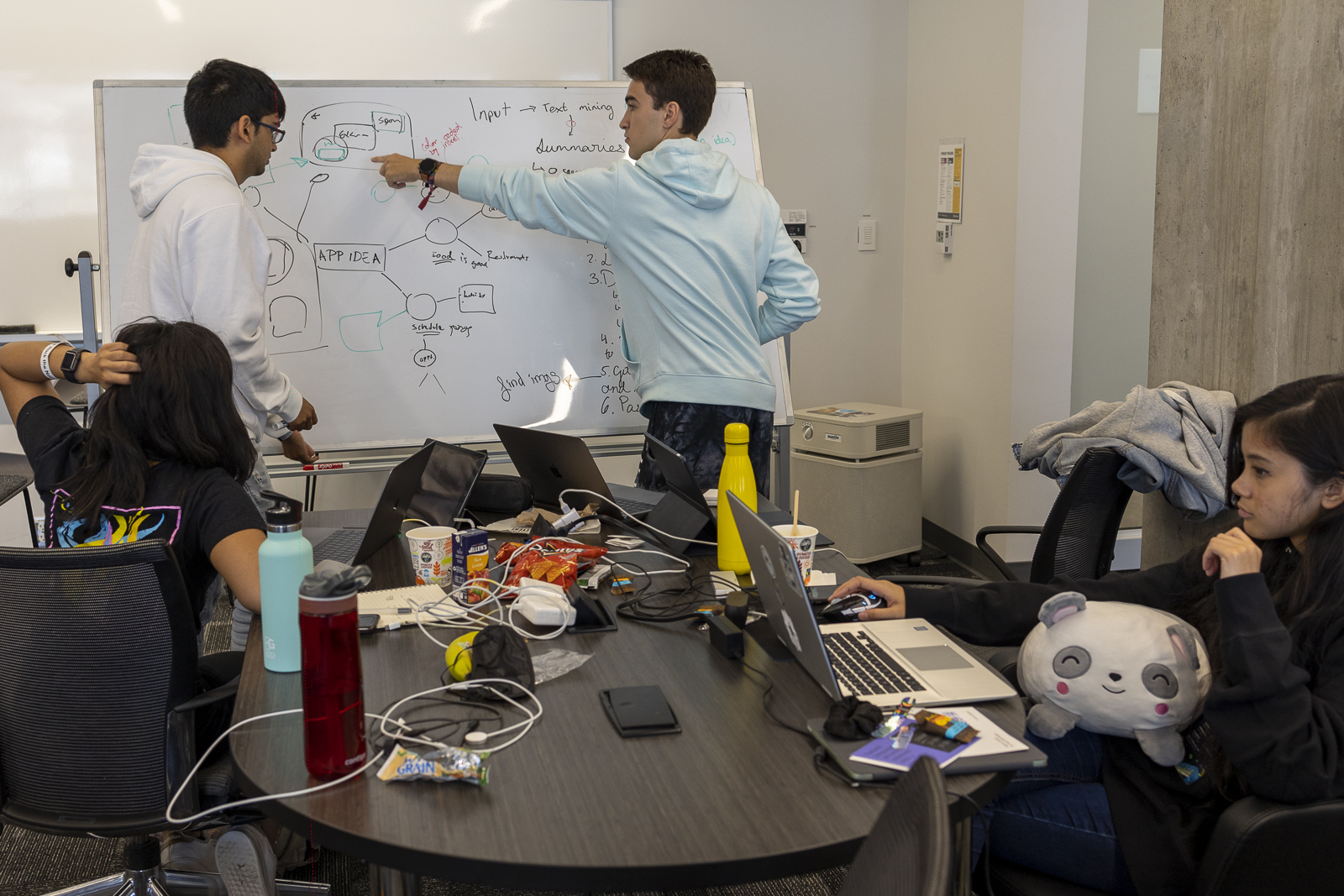 Working out a hack on the whiteboard (Communitech photo: Anthony Reinhart)

“I really liked what he said about dreaming big,” said Kenneth Salim.

Added Owen Gretzinger: “I was really impressed with how much passion he has, and for taking the time to come out and inspire the next generation.”

As the weekend drew to a close, many of the hackers gathered in Lazaridis Hall at nearby Wilfrid Laurier University for the closing ceremonies.

The wrap-up included project demonstrations from the competition’s 12 finalists, who were chosen from among 200 projects completed over the 36-hour event.

The top 12 included a language-translation system operated by eye movement, an app that schedules personal support workers more efficiently and an AI system that converts text into a narrated video.

The biggest cheers went to a karaoke app and to a cheeky device called the “Britafull,” a sensor that scolds roommates who neglect to refill a shared water jug.

The event ended with heartfelt messages from this year’s Hack the North organizers.

For a visual trip through Hack the North 2022, check out our photo story.

Kevin Crowley is a Staff Writer for Communitech News. He is a Michener-Award-winning former newspaper journalist with the Waterloo Region Record, and former Director of Communications and Public Affairs at Wilfrid Laurier University in Waterloo, Ont.
Hack the North 2022: In pictures
News home
Quadbridge acquires Kitchener-based IT provider Able One