'By founders, for founders' 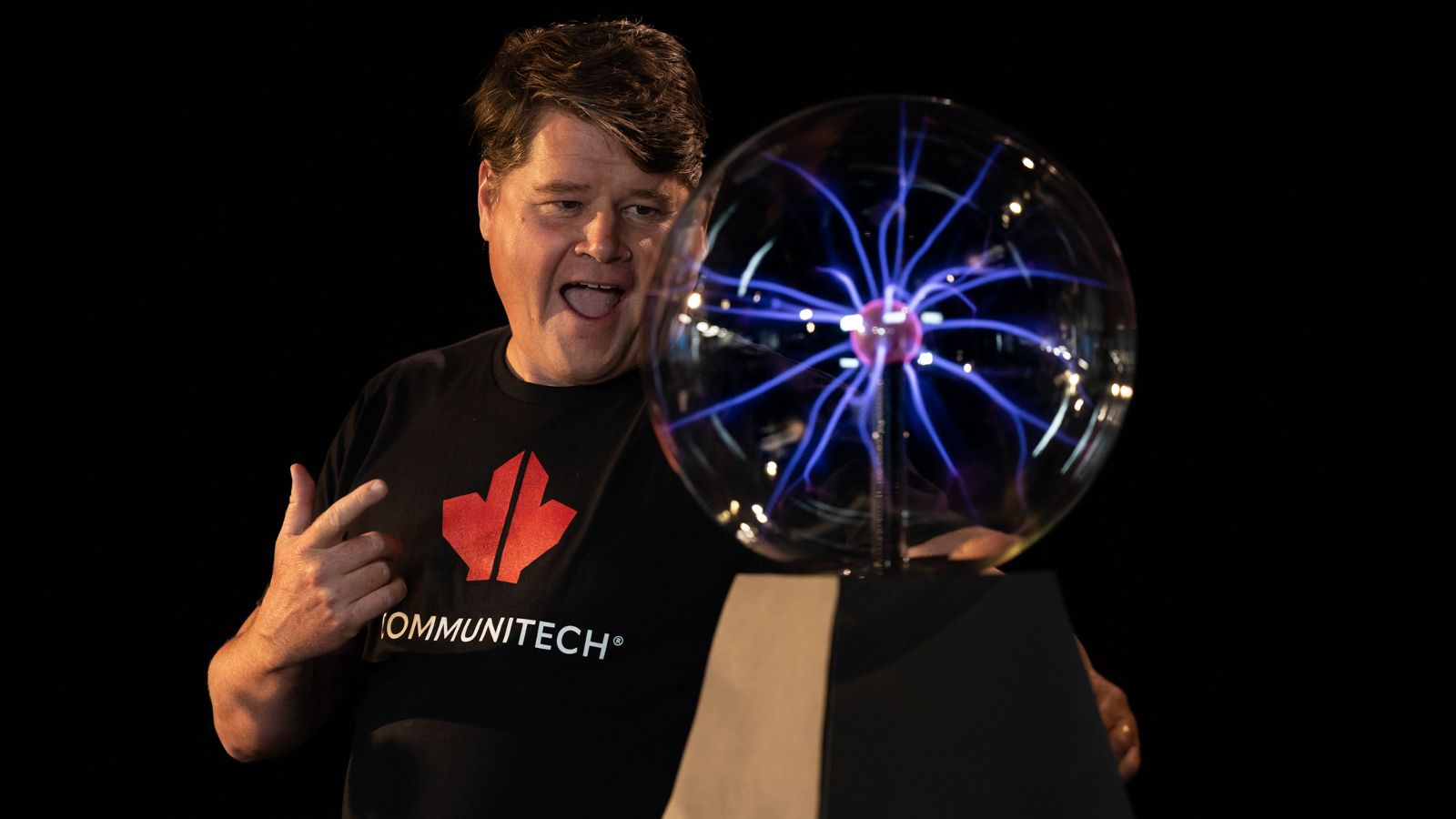 Communitech CEO and President Chris Albinson sparks some laughs with a plasma globe at the organization's AGM. ( Photo: Wayne Simpson for Communitech )

Nothing says “old-school tech” like a transparency sheet for an overhead-projector presentation.

Yvan Couture, a serial entrepreneur and driving force behind the launch of Communitech in 1997, cracked up a reunion breakfast of friends and colleagues by pulling out a thin, see-through sheet of plastic – the 1990s equivalent of a PowerPoint slide.

“This is from my 1993 presentation,” Couture said, holding up the decades-old transparency. “That presentation didn’t go anywhere, so we tried again in ’96!”

And thank goodness he did.

Couture and company reunited to celebrate the 25th anniversary of Communitech, one of Canada’s most successful founder-support organizations and a model for tech associations the world over.

The breakfast reunion kicked off a day of celebrations that included a typical (for Communitech) laugh-filled annual general meeting.

“Talk about standing on the shoulders of giants,” said Communitech CEO and President Chris Albinson as he welcomed the breakfast gathering to the Communitech Hub in Kitchener.

Praising the vision of those who laid the foundation for Waterloo Region’s renowned tech community, Albinson noted that Canada’s tech ecosystem is now the second largest in the world and the fastest-growing by a factor of 400 per cent.

“We truly have the foundation here to be the absolute centre of innovation on the planet,” he said. “That’s the opportunity that we have here.” 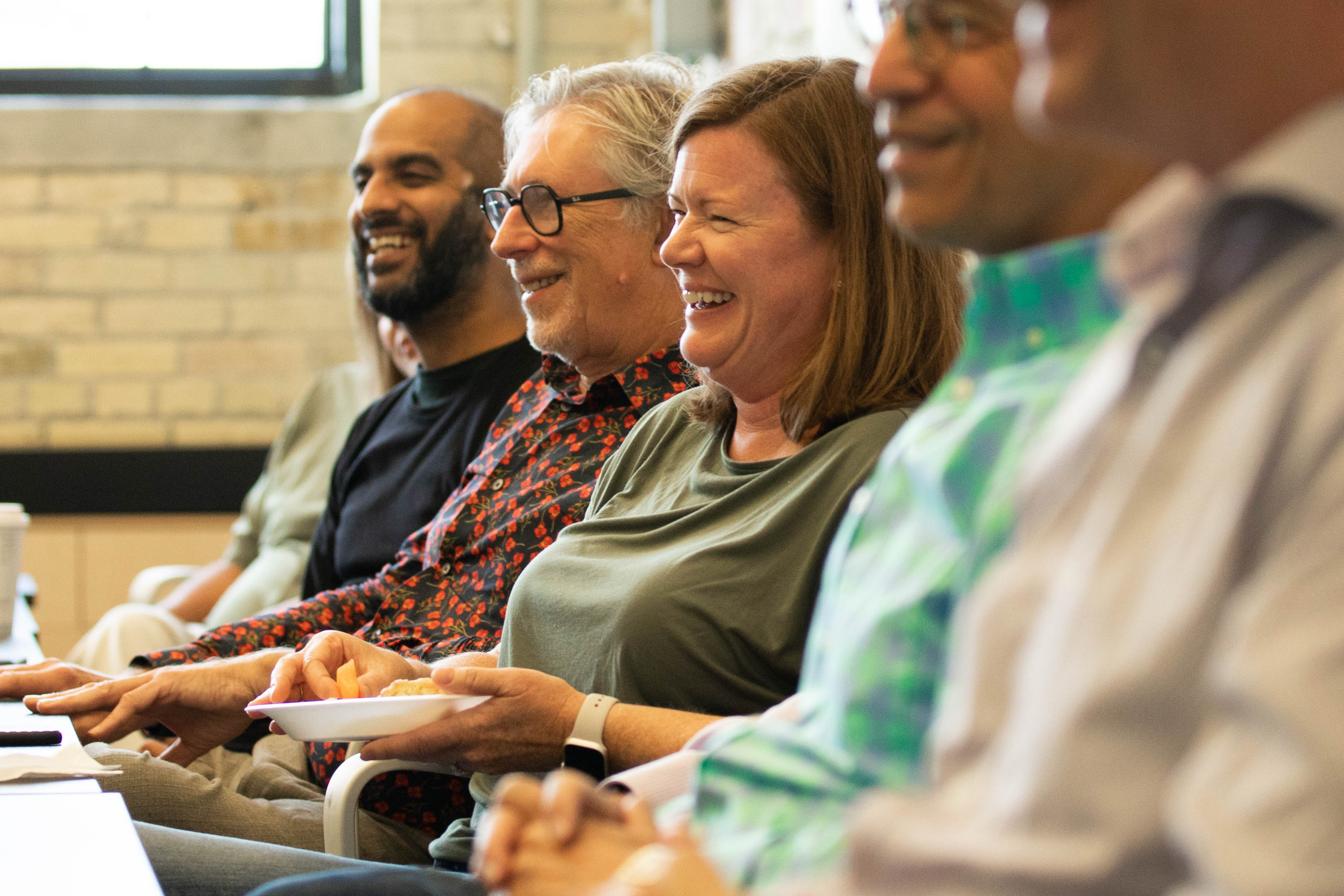 Catherine Graham, Communitech's new Board Chair, shares a laugh at a breakfast gathering

of Communitech founders and former board members.

Of the many comments, stories and reminiscences shared during the breakfast, three themes dominated: the importance of peer-to-peer experience-sharing; the region’s unique culture of collaboration; and a shared desire to aim high and “build big things.”

“It’s one of the great aspects of Waterloo Region – and which we’ve built here at Communitech – is this culture that we help one another,” said serial entrepreneur Dave Caputo, outgoing Chair of Communitech’s board of directors.

Commercial real-estate veteran John Whitney, a past Communitech Board Chair, echoed those sentiments.

“I’ve never seen an organization like this, that when you reached out to a member, they were there to support you,” he said. “Each Communitech CEO has taken the organization further. It’s great to see that evolution.”

One of those former CEOs, Iain Klugman, recalled how he left his job as CBC's  Executive Director of Marketing Communications in 2004 to join Communitech, which at the time was a six-person organization.

“My friends in Toronto thought I was crazy,” he said. “But I knew that something remarkable was happening here.”

Like others, Klugman said one of Communitech’s greatest strengths is that it was started by founders for founders.

Carol Leaman, another serial entrepreneur and veteran tech leader, said she appreciated the support that Communitech – and Klugman, in particular – provided to her and other women tech founders.

“It’s just tremendous to watch the organization and the community grow at all levels,” said Leaman, Communitech’s first-ever Executive in Residence. “I can’t imagine a better place for anyone to live and start a company than Waterloo Region.”

Harking back to Communitech’s roots, Yvan Couture recalled how he was running an executive forum for the Dean of Business at Wilfrid Laurier University in 1992 when he got a call from Randall Howard, then-CEO and co-founder at MKS Inc. Howard wanted to join the group. Couture took him for lunch to a favourite local haunt, the old Casa Nina Restaurant in Waterloo.

“We talked for three hours,” recalled Couture, “and I said, ‘You’re not going to join the group; we’re going to start a new one.”

That was the origin of what became known as the Atlas Group, a handful of local tech CEOs who met regularly for peer-to-peer, experience-sharing discussions. 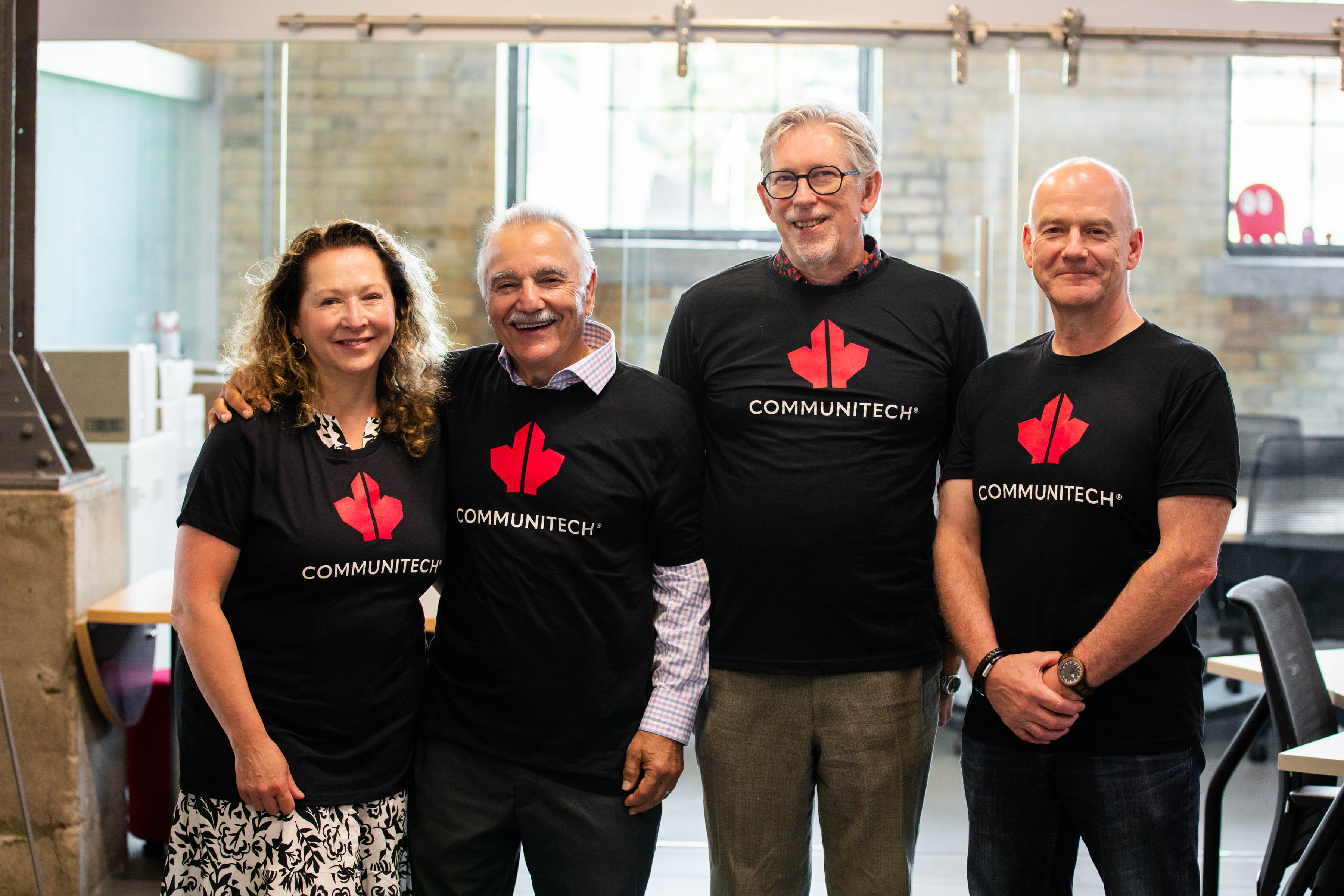 Couture went on to found Taaz Corp., which provided marketing and consulting services to technology companies. Through this work, Couture began studying associations across North America that were created to support regional tech clusters. Waterloo Region could really use such an organization, he thought.

“It was really about advocacy,” he said. “We needed a collective voice.”

Not everyone associated with the Atlas Group was keen on the idea of creating a more formal tech association. Nonetheless, Couture and several others – including Randall Howard and Tom Jenkins, then president of OpenText Corp. – persisted.

By 1996, the early proponents – with help from then-Mayor of Waterloo Brian Turnbull and then-MP Andrew Telegdi – formalized a proposal and persuaded a small group of area business leaders to back up their verbal support with a cheque.

The organization that became Communitech was launched in early 1997 under the bulky moniker of the Waterloo & Area Technology Association (WATA). Membership grew to 23 by the first meeting in March, and rose to 47 by June. The group hired former IBM and Waterloo Maple sales-and-marketing executive Vince Schiralli to be the organization’s first president.

“It was really a labour of love for me,” Schiralli recalled at the breakfast gathering. “I never envisioned what Communitech has become over the last 10 to 15 years.”

One of the first things Schiralli, Couture and Jenkins did was dump the name “WATA” and replace it with “Communitech.”

Schiralli said one of the most valuable and enduring functions of the organization is its capacity to facilitate regular peer-to-peer groups for senior tech leaders.

“Everybody shared shamelessly,” he recalled. “You know, ‘Here’s where I screwed up, don’t go there.’ It was about helping others avoid the mistakes they’d made.”

“Communitech was founded on this peer-to-peer concept,” he said. “It’s one of the few programs that has persisted successfully over the 25 years.”

The anniversary celebrations carried on later in the day at Communitech’s annual general meeting.

Outgoing Board Chair Dave Caputo welcomed incoming Chair Catherine Graham, co-founder and CEO of workflow-platform commonsku and a Communitech board member for the past five years.

“I want to thank Dave for his exemplary service as Chair,” Graham said. “As many of you know, Dave personifies a founder’s journey. From PixStream, to Sandvine, and now Trusscore and, of course, Chair of Communitech, he has given generously of himself to help other founders on their journey.”

CEO and President Chris Albinson provided a recap of the organization’s True North Strategy – a commitment to stay focused on founders, to help attract capital and talent, to help generate customer connections through integrated markets, to help more Canadian tech companies reach a billion dollars in revenue, and to leverage Canada's reputation as a trusted nation and make it a competitive advantage.

“??In a world where big tech is not trusted, Canada’s brand is trust,” Albinson said. “Trust is our core superpower, which is why the best people in the world are coming here in growing numbers, to build big, awesome things for humanity. Our True North Strategy is purpose-built to help founders leverage Canada’s trust advantage to secure customers, capital and talent.”

“Like Communitech, Briefed.in was built by founders, for founders,” Albinson said. “Through this acquisition, we’re not only collecting the right data from startups across the country – we’re grounding the vital support that we provide to Canadian founders in robust analytics.”

For a more detailed look at the founding of Communitech, check out this feature story.

Kevin Crowley is a Staff Writer for Communitech News. He is a Michener-Award-winning former newspaper journalist with the Waterloo Region Record, and former Director of Communications and Public Affairs at Wilfrid Laurier University in Waterloo, Ont.
Eon Media joins forces with largest broadcaster in North Carolina for new AI venture
News home
Hack the North's opening message: 'Be audacious'