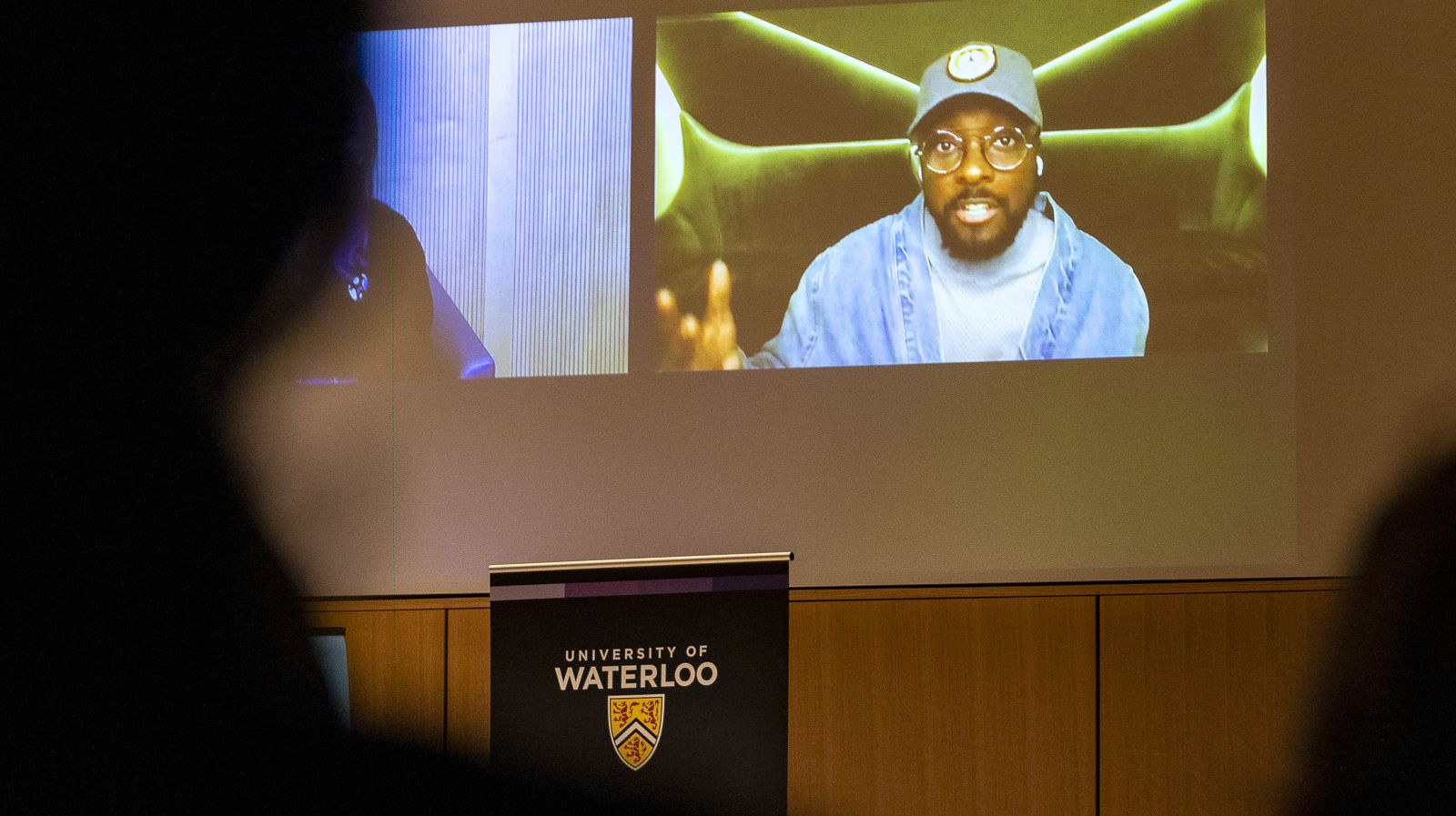 One of the largest hackathons in the world is back this weekend in all its creative, frenzied, around-the-clock glory.

Hack the North kicked off Friday evening in Waterloo with more than 1,000 student participants from around the globe.

Run by University of Waterloo students, this year’s event is the first in-person version of the annual hackathon since COVID forced the last two to be run virtually.

A geyser of pent-up excitement was on full display Friday night during opening ceremonies at Lazaridis Hall, the business faculty building at nearby Wilfrid Laurier University.

The musician and tech-culture guru revved up the crowd with an entertaining talk about the connections between music, technology and creativity. He also revealed a little-known fact: In 2006 and 2007, he frequently flew to Waterloo from his home in Los Angeles to hang out with Mike Lazaridis, co-founder of BlackBerry, and his co-CEO, Jim Balsillie.

“​​I used to go up there all the time and meet with Mike and Jim,” said will.i.am. “Those guys are like the coolest cats.”

He went on to explain why Waterloo holds a special place in his heart. 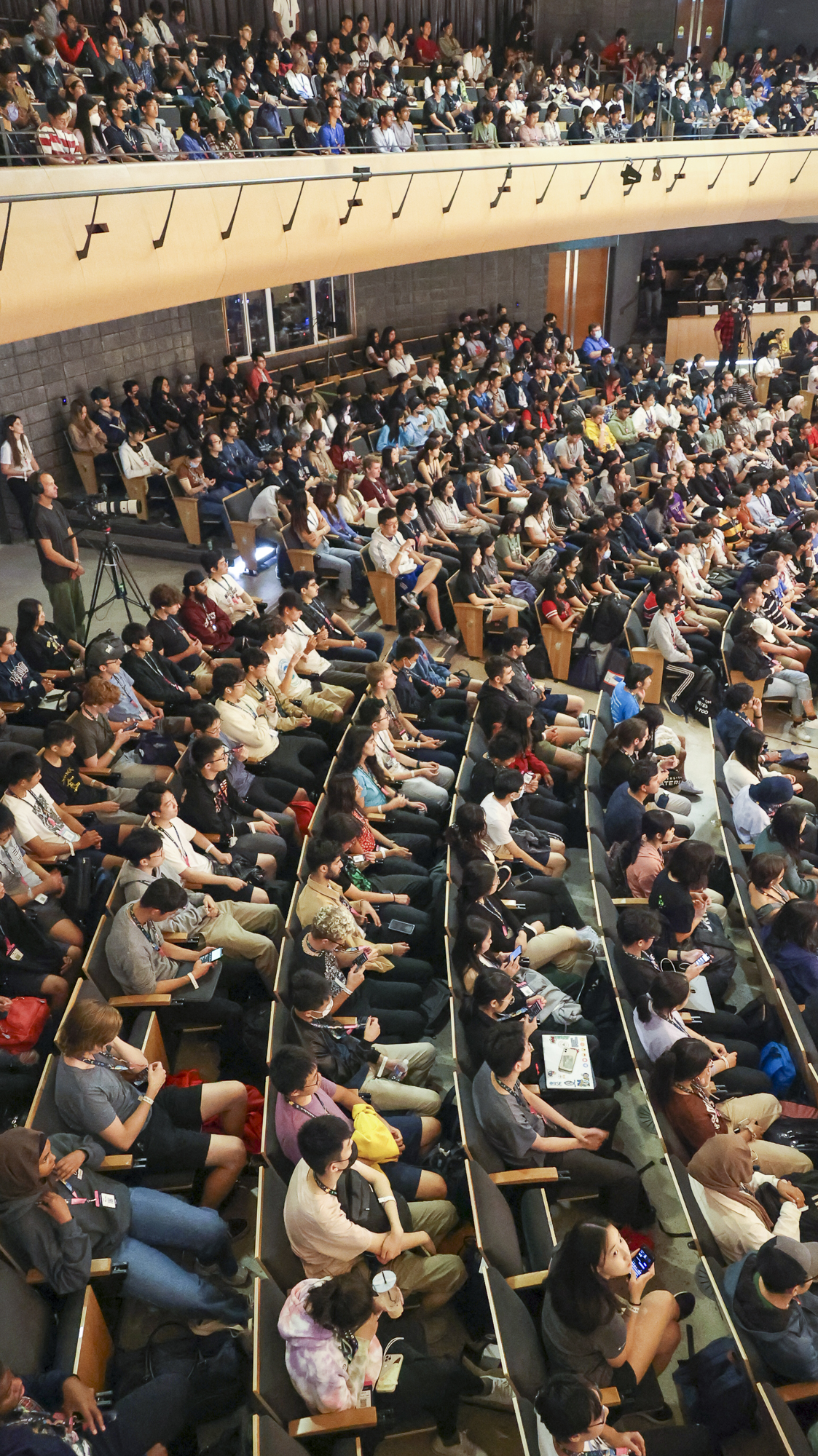 Students at Hack the North's opening ceremony at

“It’s because, you know, I’ve loved technology for as long as I can remember, and to be taken seriously for your ideas and contributions by folks who have created awesome technology – to bring you up to brainstorm, to bring you up to see product before it comes out, and collaborate, that was Jim Balsillie and the founders of BlackBerry… Just thinking about it reminds me of why I’m in the field that I’m in now, starting companies and investing in technology. And I can say that Waterloo was that feed that told me that my tech aspirations and dreams could be fulfilled.”

He finished the heartfelt story with a rousing shout out: “Waterloo in the house! Thank you so much!”

In a conversation with UW computer engineering student Jessica Zhang, will.i.am talked about growing up in a poor neighbourhood in East Los Angeles and how he benefited from a program that allowed him to attend a special school for science and technology.

That experience, coupled with his success in the music business, led him to create a charity called the i.am Angel Foundation, which helps inner-city children get a good education and prepare for college and university.

“It's not just giving back, it’s paying it forward because I was the recipient of someone else’s big grand idea,” he said.

He also emphasized the importance of being ambitious and aiming high.

“I am so passionate in my entrepreneurial efforts to show kids that we can create companies, too. We don’t just have to work at a company… I want to compete with the folks that are looking to hire us. We can create freakin’ big companies as well. We should go out and try to solve problems as well. And it starts by encouraging inner-city kids and giving them the skill sets to create tomorrow’s companies and solve tomorrow’s problems starting today.”

Riffing further on the same theme, will.i.am urged the audience of young developers and engineering students to be “audacious” in their own dreams and career plans. He underscored the point by saying that The Black Eyed Peas competed with the best in the music business, including megastars like Michael Jackson.

“I could never sing like him, I could never dance like him. But we sold a lot of records, we got a lot of streams. So if we could do that in music, the folks in tech, instead of just wanting to work at Google, [you should] compete with Google, compete with Facebook – compete and go try to take their f@#&ing lunch!”

The line attracted a roaring cheer.

The musician responded by stressing the importance of humility, patience, perseverance and, perhaps most of all, the role of collaboration and cross-disciplinary expertise in creating something truly new and creative.

“​​I’m encouraging you to do what people think is impossible,” he said. “You have to be able to believe in your ability to put a team together to solve the world’s problems. And that’s what I mean by competing. There are a lot of problems to be solved, and in technology, you could aim your mind and your skill sets at solving those problems and competing with the best.”

Asked about the tension between logic and creativity, will.i.am emphasized the need for a cross-pollination of expertise, whether you’re trying to create innovative technology or an original piece of music.

“... that’s when you need that out-of-the box thinker, or that cross-disciplinary creative environment, to keep the logic but at the same time embrace audacity, embrace ambition, embrace rebellion. How are you going to disrupt the status quo? And how fearless are you, and urgent are you, with going to market or trying to solve that problem? We need as many disciplines as possible.”

In the final question of the night, will.i.am was asked what he thought the hackathon participants should focus on over the weekend.

“Whatever you want to do,” he said, again to thunderous applause. “Put different types of unlikely clusters together and solve the wildest problems, because there are a lot of them. There’s a lot of problems to solve.” 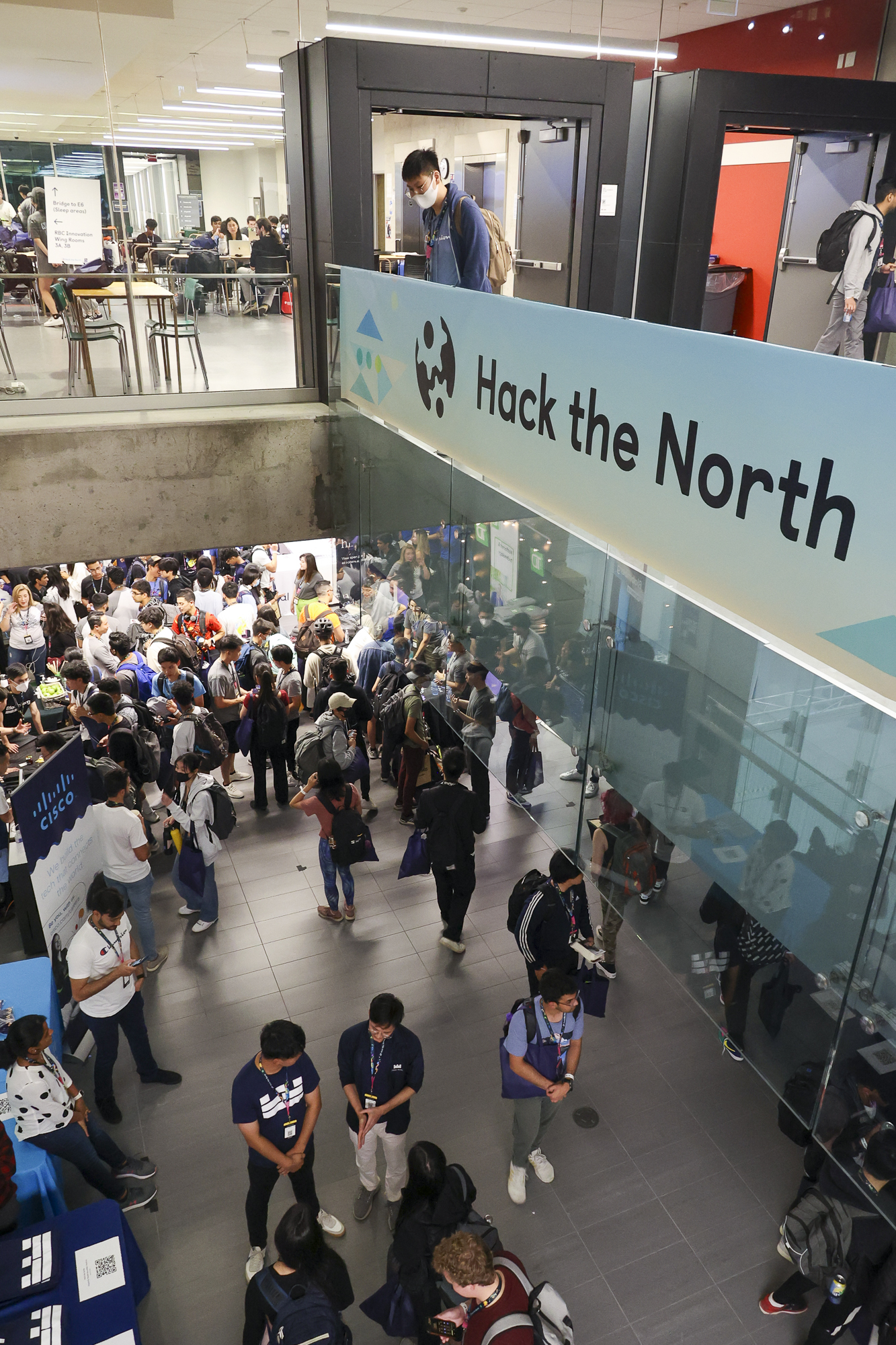 Attendees roam the Engineering 7 building at

the University of Waterloo.

Hack the North event involves teams of students working to solve technical challenges over a 36-hour period that runs from Friday night to Sunday afternoon.

With the help of technology professionals and mentors, the students learn about advanced tech solutions, collaboration and creative problem-solving, all under the pressure of strict deadlines.

Workshops on a variety of tech topics are held throughout the weekend, and students get a chance to network with representatives from a wide range of companies.

They also get to mingle with fellow students from more than 100 schools from Canada and abroad, including the Massachusetts Institute of Technology, University of California Berkeley, and others from Australia, Brazil, Singapore, the United Kingdom, Poland, Algeria, Argentina and more.

“What I think students get the most out of Hack the North is a sense of community and camaraderie,” said Jessica Zhang, co-director of the event and a third-year computer engineering student at UW. “You’re in a room with a thousand other students who are your age and at your stage of life, and you’re working intensely on the same things. I’ve made some great friends at past events, and I’ve heard about people who have made lifelong friends.”

Although Hack the North is student-run, the event is made possible through the assistance of the University of Waterloo’s Engineering Department and numerous sponsors and partners, including Communitech.

Most of the events are taking place on the University of Waterloo campus, but the Friday night opening ceremonies and the Sunday afternoon closing ceremonies are being held at Wilfrid Laurier University’s Lazaridis Hall on University Avenue.

Kevin Crowley is a Staff Writer for Communitech News. He is a Michener-Award-winning former newspaper journalist with the Waterloo Region Record, and former Director of Communications and Public Affairs at Wilfrid Laurier University in Waterloo, Ont.
'By founders, for founders'
News home
Hack the North 2022: In pictures