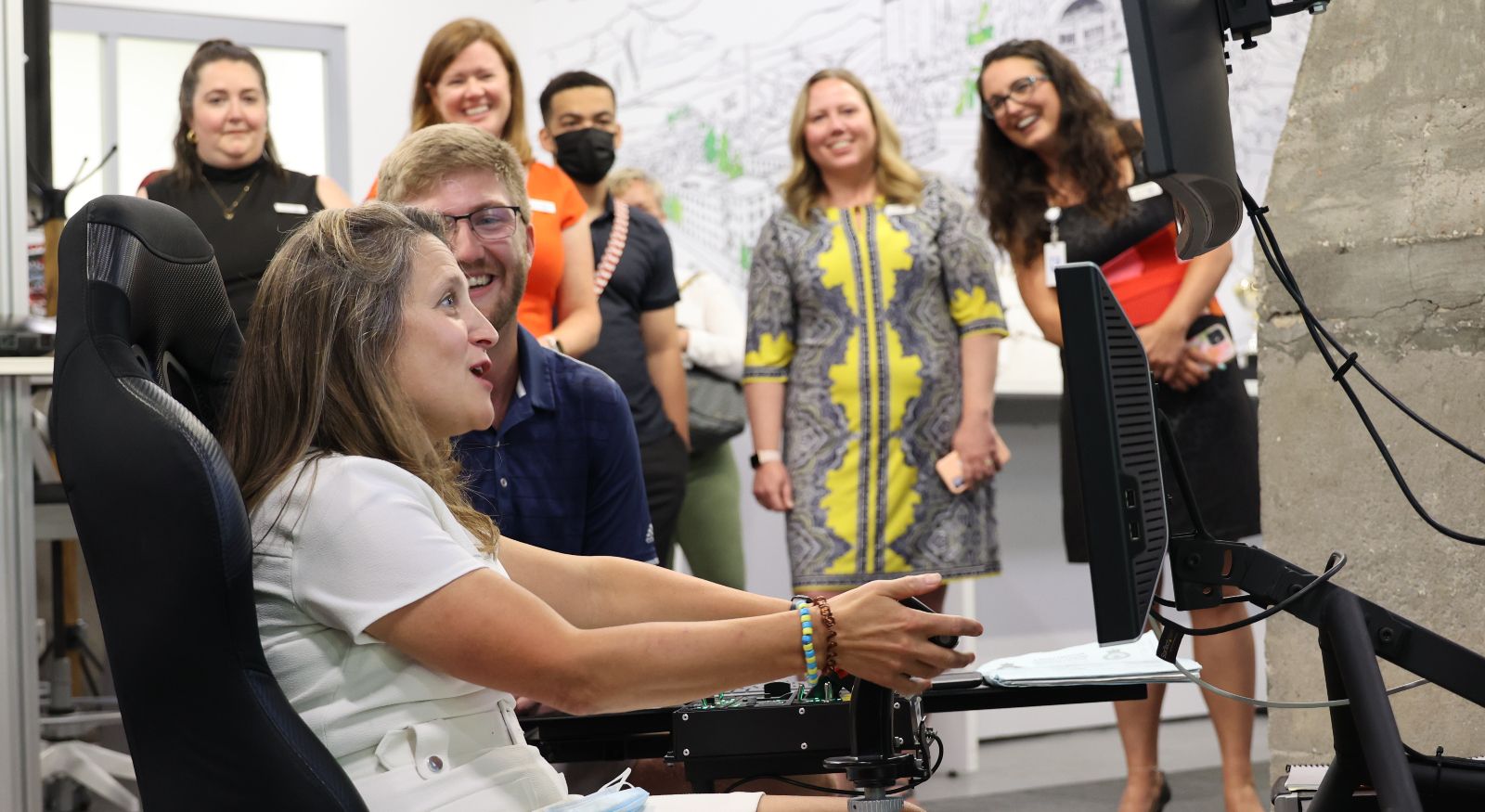 In mid-August, OpenText CEO Mark Barrenechea commented on the pullback in the tech sector by telling the Financial Post that, “We can see the headwinds out there, but we’re leaning in right now.”

That turned out to be an understatement. A week later, OpenText announced a blockbuster deal to purchase British software-maker Micro Focus International PLC for a whopping US$6 billion.

The acquisition, which is expected to close in 2023, will make the Waterloo-based OpenText one of the largest software and cloud businesses in the world.

OpenText’s roots stretch back to 1989 when a group of researchers at the University of Waterloo created a searchable version of the Oxford English Dictionary. That work led to the Internet’s first search-engine technology, which was adopted by Yahoo. Today, OpenText is known globally for cloud-based business-to-business information management software.

Waterloo-based Vena Medical announced that, for the first time, doctors used its innovative technology to remove a blood clot from a patient. This milestone event took place during a 17-minute emergency procedure in June at London Health Sciences Centre-University Hospital in London, Ont. Since then, the Vena technology has been used on another four patients at several other hospitals, including The Ottawa Hospital and the University of Alberta Hospital.

The process of launching a medtech company is longer and often more complex than it is for just about any other kind of tech enterprise. The unique challenges were discussed in a recent BetaKit interview with Alex Muggah, Director of the Synapse Life Science Consortium in Hamilton, who shared the story of Waterloo-based NERv Technology.

For more about the burgeoning medtech sector in Waterloo Region, check out a forthcoming feature story that will appear Sept. 7 on Communitech’s Tech News site.

Ecopia AI, a member of Communitech’s Team True North, has landed $10 million worth of contracts with the U.S. National Oceanic and Atmospheric Administration (NOAA). The deal includes another $6 million in possible option contracts.

Ecopia uses AI-based mapping systems to mine GPS and GIS datasets. It will be using this technology to help the NOAA generate highly-accurate, large-scale mapping data for U.S. coastal areas and all of Alaska.

Speaking of artificial intelligence, NuEnergy.ai continues to gain traction with a platform that supports the ethical and transparent governance of AI systems.

The company announced its third implementation of a large-scale AI governance project with the federal government – a deployment of its Machine Trust Platform with Public Services and Procurement Canada.

Meanwhile, Communitech is developing a “Good AI” coalition to guide founders and shape discussions around the ethical and transparent use of artificial intelligence. The project is an extension of Communitech’s “tech for good” mantra and the belief that Canada’s reputation as a trusted nation is a competitive advantage for our tech companies.

News out of eSentire last month seemed like the stuff of espionage thrillers: the Waterloo-based cybersecurity company announced that it had unmasked a Canadian hacker behind an insidious malware used by Russian gangs.

eSentire’s team of cyber sleuths spent more than a year tracking “Chuck from Montreal,” one of several aliases used by a hacker associated with the Golden Chickens suite of malware.

eSentire did not publicly name the man (who also used the monikers “badbullzvenom” and "Frapstar") but they’ve provided police with detailed information about his real identity.

The Waterloo Region Record followed up with a story about eSentire’s work tracking Russian efforts to disrupt Western society by sowing disinformation via the internet and social media.

Speaking of cybersecurity, federal Public Safety Minister Marco Mendicino paid a visit to the University of Waterloo to announce a $675,000 grant to Quantum-Safe Canada. The money will help the organization raise awareness and preparedness around the potential threat posed by hackers using quantum computers.

According to Quantum-Safe Canada, “the encryption that underpins the security of society’s critical infrastructure is at serious risk of being undermined by quantum computers within the next 8-15 years.”

Quantum-Safe Canada is led by Michele Mosca, a UW professor who is an expert in quantum-safe cryptography and the co-founder of the Institute for Quantum Computing (IQC).

The Communitech Hub was a popular stop for federal officials in August.

First up was Finance Minister and Deputy Prime Minister Chrystia Freeland. She spent nearly three hours at Communitech on Aug. 10, meeting with tech leaders, touring the facility, talking to reporters… and trying out a flight simulator in the RCAF innovation space.

“I want all Canadians to really appreciate that Canada is not an aspiring technology power – Canada has totally arrived,” Freeland told an enthusiastic audience.

One of Ng’s key themes was the important link between supporting small- to medium-size businesses and strengthening Canada’s export competitiveness.

Also paying a visit to the Communitech Hub was federal Deputy Minister of Health Stephen Lucas, who met with medtech leaders to talk about the role of innovation in Canadian health care.

Riders on the storm

Current market turbulence is making life difficult for a lot of tech companies, especially those that don’t have a stockpile of cash and steady revenue.

Meanwhile, Communitech continues to support tech founders and workers through a variety of programs. As BetaKit noted, Communitech has revived The Help List to assist displaced tech talent in finding new jobs, and we continue to operate the nation-wide Work in Tech job board.

In the midst of a challenging economy, UW Engineering Dean Mary Wells is urging Canada to ramp up support for tech founders and startups.

Writing in the Toronto Star, Wells said the country needs to maintain the momentum built up by the Canadian tech sector in recent years. And she had high praise for the Waterloo-Toronto innovation corridor.

“Canada’s investments in the tech entrepreneurship space are paying off and our prominence on the world stage in this sector is growing,” Wells wrote. “We have Communitech and the Accelerator Centre in Waterloo, Creative Destruction Labs in Toronto and Vancouver and Volta in Halifax. Across the country we have invested in helping people start companies in an effort to pave the way for innovation and Canada’s economic future.”

Wells ended her column with a call to action “to encourage and broaden” support for Canadian startups.

Contributing columnist Melanie Baker always has a unique take on things. In August, she observed that the hiring process is “basically a weird dating exercise” as employer and candidate decide whether to take a chance on one another.

In another column, Baker explores bad behaviour in the workplace. The culture of any organization, she concludes, is shaped by the worst behaviour the leader is willing to tolerate.

Meanwhile, fellow columnist Alex Kinsella tells us about two local tech workers who’ve launched a podcast about neurodiversity – the concept that there’s no right way of thinking or learning.

In a second piece, Kinsella writes about the Creative Recording Initiative – a music and technology program that gives teens hands-on experience with music and audio production. This innovative opportunity comes courtesy of a partnership between the City of Kitchener and the House of Friendship, along with support from Communitech, Centre In The Square, Cook Homes and area resident Stephen Dunnington.

This edition of the Tech Roundup was compiled by Kevin Crowley. Sign up to receive the Roundup each month by visiting communitech.ca/technews and scrolling to the bottom of the page.

Kevin Crowley is a Staff Writer for Communitech News. He is a Michener-Award-winning former newspaper journalist with the Waterloo Region Record, and former Director of Communications and Public Affairs at Wilfrid Laurier University in Waterloo, Ont.
M-Theory: COVID's long tail in the workplace
News home
Magnet Forensics expands Down Under