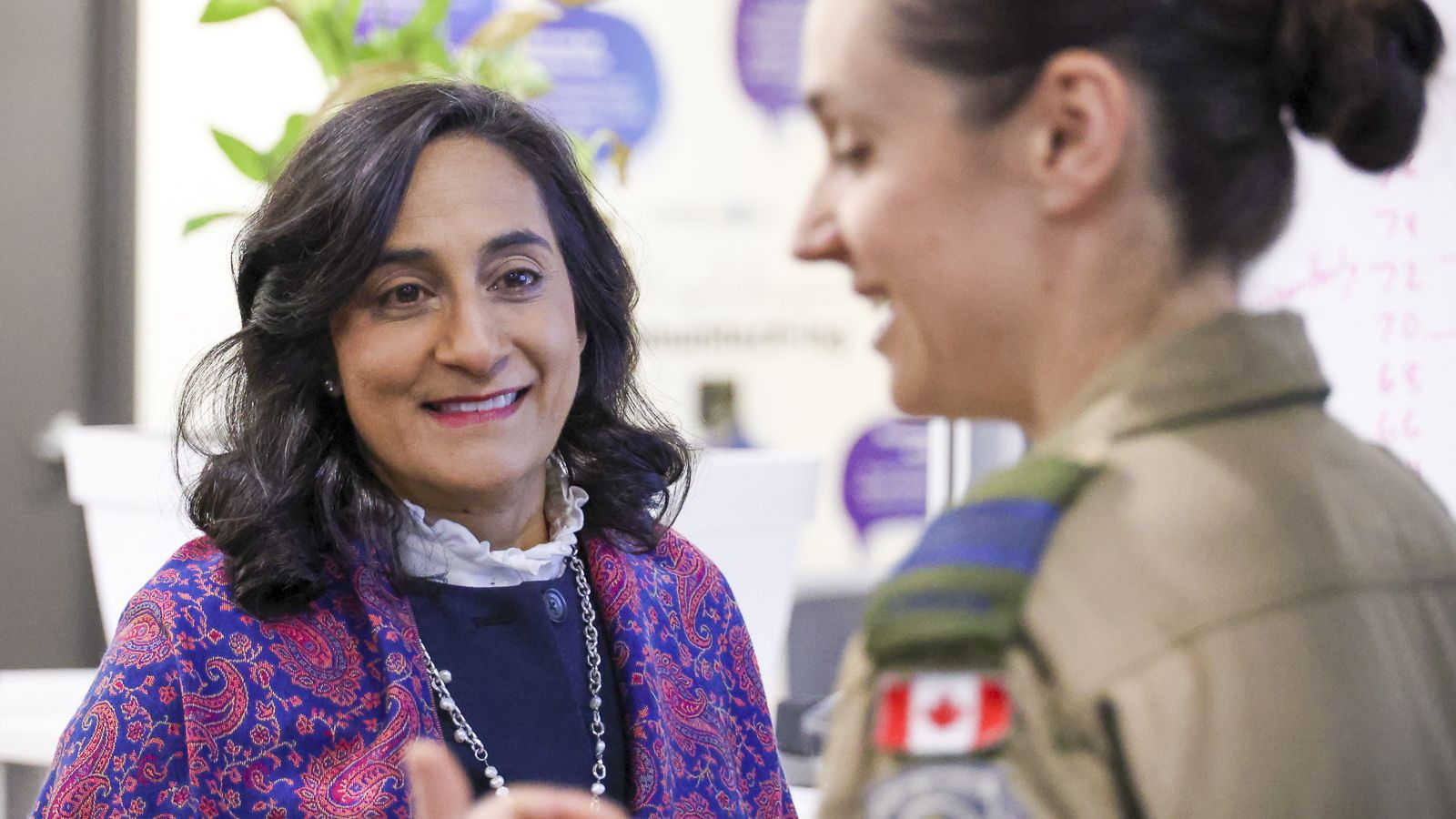 Just days after announcing Canada’s purchase of a fleet of F-35 fighter jets, Defence Minister Anita Anand paid a visit to Communitech, where she took the controls of an F-35 flight simulator and soared into the virtual blue yonder.

“This is cool!” she declared from beneath a bulky VR headset as she executed a successful takeoff.

The simulated flight came courtesy of the RCAF Flight Deck Innovation Lab, located in the Communitech Hub in downtown Kitchener.

The light-hearted activity was just one part of Anand’s more serious innovation-themed visit, which focused on the rapidly growing intersection between technology and national security.

In a roundtable meeting with industry and military representatives, participants shared their experiences and recommendations for ensuring that the Canadian Armed Forces can take greater advantage of the best of Canadian-made innovations 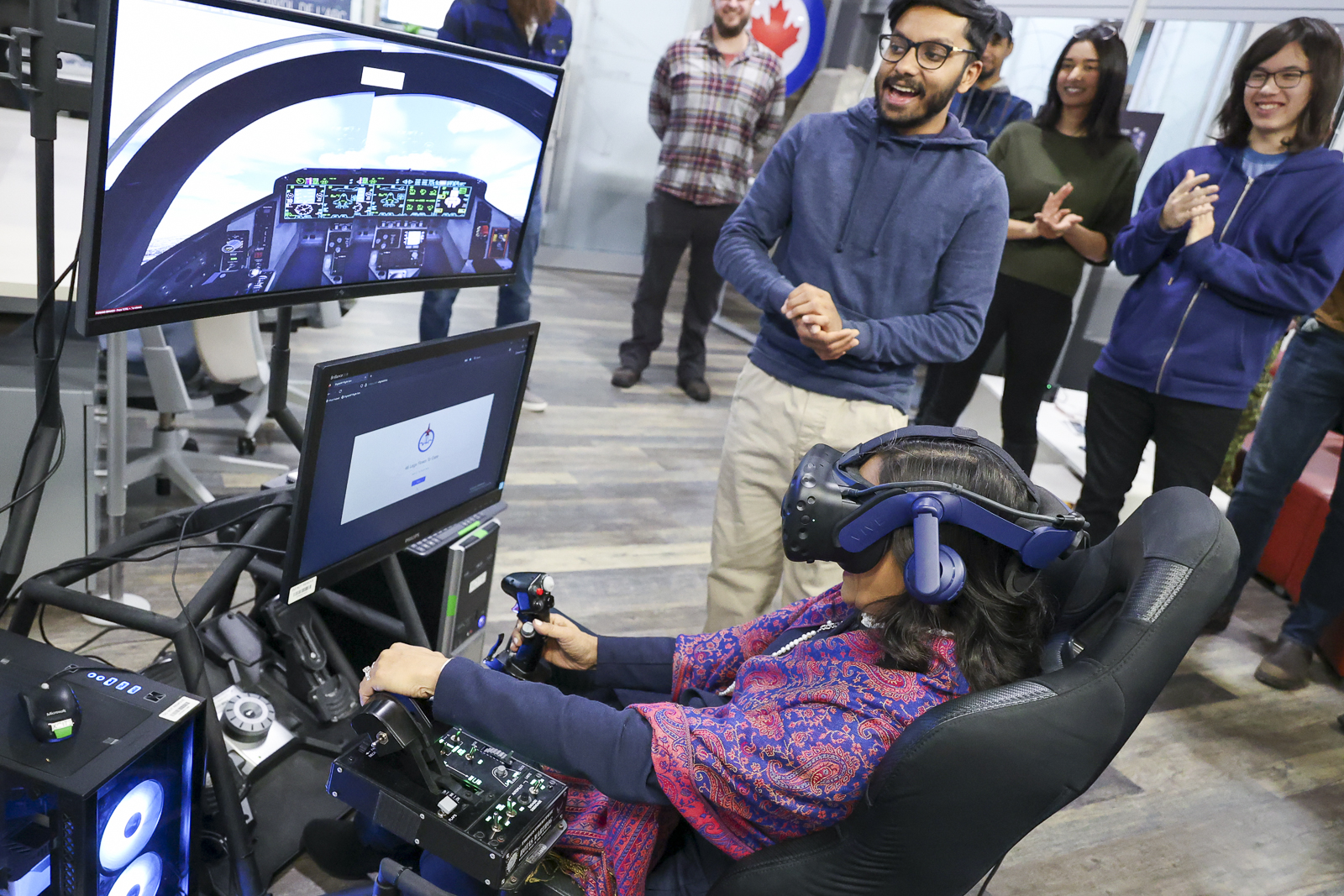 jet at the RCAF Flight Deck Innovation Lab at Communitech.

Much of the discussion centred on government procurement processes, which several participants said were far too slow, cumbersome and outdated to keep pace with rapidly evolving security threats and the innovation needed to counter those threats.

“One of the bigger problems is that we still look at procurement through an industrial lens,” said Michael Smith, a lawyer who recently left the military to work as Chief of Staff at venture capital firm ONE9. “We’re always going to need shells for artillery. But as much or more, we’re going to need agile software that maintains the relevancy of legacy systems for longer, yet the same model is applied to the procurement of software as it is the production of artillery shells.”

Major Amanda Whalen, who works with the Flight Deck lab at Communitech, said that military personnel like her who are exploring innovation run into similar procurement challenges, albeit from the buyer’s side.

Technology evolves rapidly, yet it can take six months to a year to “grind through the procurement process,” Whalen said. That delays the testing and implementation of potentially useful technology, sometimes to the point where both the vendor and the military personnel interested in piloting the technology have moved on.

“We’re trying to get there,” she said. “We need to explore cloud-based applications, and we need to make it so that we can use applications and technologies and software in operations. It’s the future. We have the F-35 coming in – if we don't figure this out, it’s a problem.”

J. Paul Haynes, President and Chief Operating Officer of Waterloo-based cybersecurity company eSentire, said that companies like his move at “warp speed” and often just “bypass” the Canadian government as a potential client because of the length of time required to finalize security related contracts.

He noted that a lot of innovations pitched to the military are “dual-use” technologies, with both defence and commercial applications. Companies often hope to land a military contract first, which they can then use to help sell their product to a larger commercial market. But with such a long and often uncertain procurement process, many companies are not bothering to market to defence – a loss for both the Canadian military and Canadian businesses.

“Industry is bypassing government because it’s not worth their while and so we’re missing out on the best tech, the best talent,” said Smith.

Anand indicated a keen interest in what she was hearing 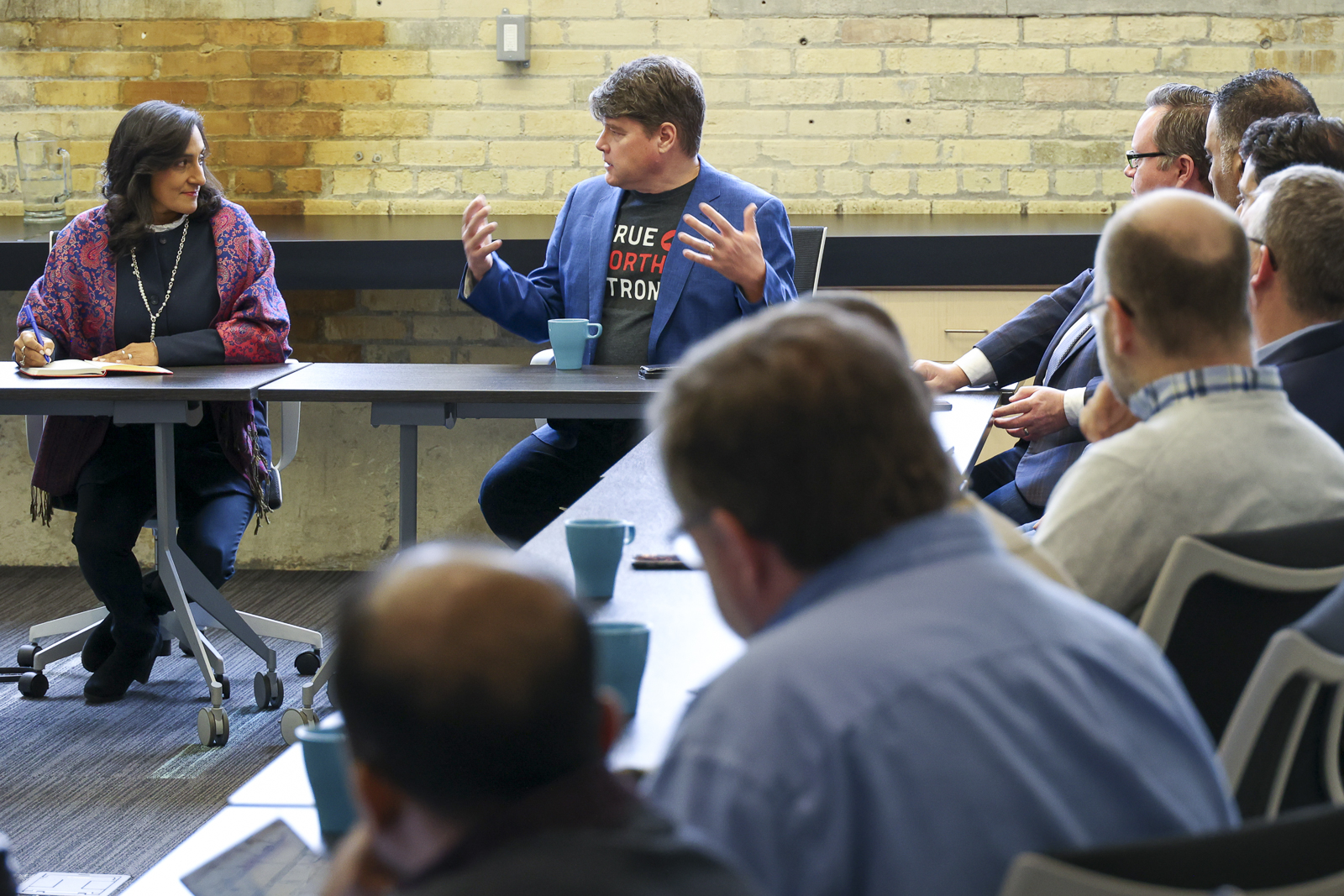 during a roundtable discussion with tech founders.

A lawyer with expertise in financial markets and corporate governance, she said she is focused on “making a difference in the economy, not only in the life of the Canadian Armed Forces.

“That’s the lens I take on the work that I do: What are the advantages for businesses that flow through to Canadians at the same time as building the Canadian Armed Forces and the capabilities that are required for us and them do our job every single day on behalf of our country?”

Anand pointed to the recent F-35 announcement in which the federal government pledged to spend $19 billion to purchase 88 of the stealth fighter jets over the next decade. Not only will the purchase provide the military with a state-of-the-art aircraft, it will add $425 million annually to Canadian GDP and create 3,300 jobs annually in the aerospace sector and related supply chain industries, she said.

In addition to the F-35 purchase, Anand noted that last year’s federal budget included $8 billion over five years in new defence spending, on top of a 70-per-cent increase announced in 2017. She also said her department has embarked on a defence policy review, which she said offers the “potential for additional interaction and engagement with business.”

In response to the procurement concerns, Anand pointed to her experience as Minister of Public Services and Procurement during the height of the COVID-19 pandemic.

“One of the ways that we were able to get two billion items of PPE and rapid tests for the country… is that we basically cut through a lot of the red tape related to procurement, and I actually dealt directly with the CEOs of the vaccine suppliers. And so, in times of urgent need, that’s fully within my capabilities and I am fully willing to do it, generally speaking.”

Communitech is working with industry and military officials to address the procurement issues. In December, the tech organization convened a discussion on national security innovation. The event demonstrated considerable interest in creating a national-security initiative based on Communitech’s “future of” collaboration model, which it has used successfully in both the municipal and health-care sectors to address similar procurement challenges.

“We’re looking to move the narrative to a whole-of-Canada effort in this defence and national security space,” he told Tech News. “The boat is big enough for everyone… but we need to row together.”

Kevin Crowley is a Staff Writer for Communitech News. He is a Michener-Award-winning former newspaper journalist with the Waterloo Region Record, and former Director of Communications and Public Affairs at Wilfrid Laurier University in Waterloo, Ont.
Tulip Point of Sale supports Tap to Pay on iPhone with Adyen
News home
‘Seize the moment’