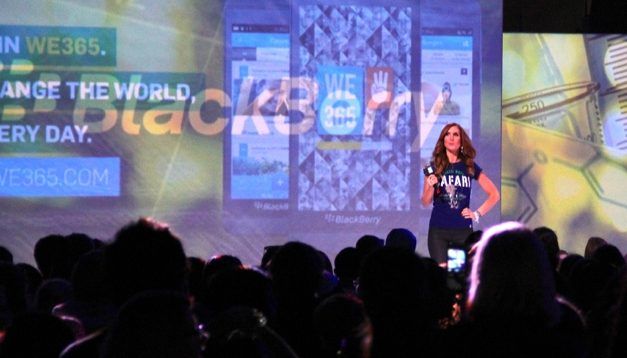 Photo: Jessi Cruickshank inspires the crowd to keep the energy going all year

In a sea of fluorescent coloured shirts and flashing lights, 6,000 of the region’s youth danced in their seats Wednesday in celebration of We Day.

The faces that belonged to those same lights that flashed with every movement may be the faces of the region’s future leaders and innovators.

This year’s event came amid challenging times for BlackBerry, which has undertaken significant staff reductions as it regroups for the future.

However, it was a moment of brightness and energy for both the region’s youth and BlackBerry employees who volunteered at the event.

“It’s the energy that we see in this room that is absolutely contagious,” Andrew MacLeod, BlackBerry’s Managing Director for Canada, told Free The Children’s Craig Kielburger. “When we look at the work that you guys are doing, not just here in the region, or in Canada, but also around the world, that’s an incredible movement that we are absolutely proud to play a role in.”

We Day was created by Free The Children as a way to engage the younger generation and give them the power to change their world, but more importantly as a way to invoke a year-long commitment through its engagement program called We Act.

BlackBerry’s citizenship program partnered with the foundation because of this shared set of values, which revolve around inspiring Canadians to become change-makers and innovators.

Since forming the partnership in 2010, BlackBerry has sent more than 150 students to Kenya and India as volunteers through the BlackBerry Build A Village Award Program.

The event has inspired more than 27,000 youth and student leaders in that time, as well as 900 BlackBerry employees who have volunteered year after year to empower these young people.

One of those employees is Natasha Kumpf, Influencer and Advocacy Programs at BlackBerry, who volunteered for the third time.

What hit close to home for Kumpf was sharing a suite with Lydia Herrle, who was the reading buddy of Kumpf’s daughter at the time of a devastating accident in May 2012.

Lydia, 13 at the time, was struck by a truck as she stepped off her school bus one afternoon, leaving her in a coma for about three months.

Green ribbons were hung around the region and money was raised for the Herrle family while Lydia spent five months in hospital recovering from severe brain injuries.

Seeing Lydia, an advocate for Free The Children, meet Marc Kielburger, who visited her  at the Hospital for Sick Children in Toronto, is what makes volunteering a rewarding experience for Kumpf.

Lydia has spent the last year and a half having to relearn basic tasks, and her determination and positive outlook have been key to her recovery.

“One day she’ll be on that stage talking to these people…she’s a true inspiration,” Kumpf said.

After her accident, Lydia donated some of the leftover proceeds from the community fundraising effort for her family to Free The Children.

“It’s [about] the kids and the stories,” Kumpf said. “And knowing that they are walking out with such a great feeling, ready to inspire and change.”

Trish Crompton is a Digital Journalist at Communitech.
M-Theory: I got a fever...for some meaningful technology
News home
View from the 'Loo: HackerNest builds tech communities, one beer at a time