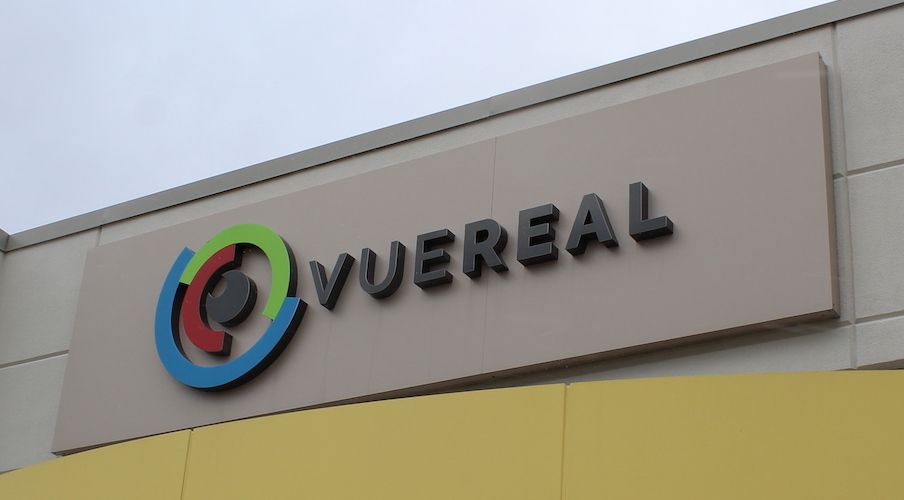 Founded in 2016, VueReal is based on Phillip Street in Waterloo. ( Communitech photo. )

Waterloo-based VueReal has raised US$14.4 million through a series B round and plans to use the cash to grow its customer base, upgrade its research and fabrication facilities and hire more staff.

The six-year-old company uses nanotechnology to improve the production process for microLED displays and other products requiring semiconductor technology.

VueReal’s immediate focus is to accelerate the commercialization of its energy-efficient micro-printing platform and offer customers a broader range of display technology for use in products such as augmented reality (AR) devices, televisions, smartwatches, smartphones, automobiles and signage.

The company, which employs 27 people now, plans to increase that number to 50 by the end of the year, and to 100 next year. It also plans to enhance its research and fabrication facility at 440 Phillip St. in Waterloo.

“With our innovative technology and accelerating commercial traction, VueReal is set for rapid growth,” said Founder and CEO Reza Chaji. “In addition to the funding, this series B round brings significant strategic partnerships and experience to VueReal, which is crucial for the next stage of growth of the company.”

VueReal raised US$10.5 million through a series A round in March 2018, followed later that year by $8.5 million in funding from Sustainable Development Technology Canada (SDTC), a federal government program focused on clean technologies.

Chaji launched VueReal in 2016 after earning a PhD in electrical and computer engineering from the University of Waterloo and spending several years as President and CTO of Waterloo-based IGNIS Innovation Inc.

In an interview with Tech News, Chaji described VueReal as “a clean semiconductor/nanotechnology company” whose platform technology can be used in the manufacture of a variety of sophisticated digital products.

“Essentially, we are using the world of the small, wafer-level processes to create high-efficient devices – they could be microLEDs, they could be sensors, processors, memory, they could be anything,” he said.

VueReal’s core proprietary technology involves “printing” things like microLEDs and sensors on a surface, rather than traditional silicon-based semiconductor manufacturing, which involves large quantities of chemicals, water and power.

“Clean technology doesn't need to be expensive or come at the cost of performance,” Chaji said. “What we are doing is actually showing that you can get high performance, much more functionality, and also be cost-competitive to other products, and be clean.”

The company is currently focused on the growing market for microLED displays.

“VueReal's transfer technology platform is a key enabler for the adoption of next generation microLED displays,” said Andrée-Lise Méthot, Founder and Managing Partner at Cycle Capital. “It is powering a new wave of displays for everyday consumer products that offer better performance while reducing their energy consumption profile.”

"MicroLEDs' superior performance and low-energy consumption is the holy grail of the display industry,” she said. “However, its challenging assembly process has been the main limiting factor for many years. VueReal's microprinting solution is a real game changer and we are very excited to back the team to take the microLED industry to the next level.”

VueReal said its technology offers a scalable way to significantly increase yield and throughput, extending the use of microLED displays to wider applications by reducing the cost and increasing performance and production throughput.

Until now, the company said, the microLED display market has been limited to either small or expensive large displays. In AR, the existing displays are monochrome or low-pixel resolution.

Looking forward, he said VueReal’s core technology has the potential to transform the semiconductor manufacturing industry, which has been plagued by shortages during the pandemic due to surging demand and, in North America, heavy reliance on Asian chip manufacturers.

“We are a small company in Waterloo that is showing that you can do it,” Chaji said. “So, if North America needs to bring semiconductor strategic manufacturing back, it doesn’t need to bring the old way. We can come up with a way that is actually more efficient… that’s what we are developing here.”