View from the 'Loo: Using AI to advance quantum research. A Q&A with University of Waterloo professor Roger Melko 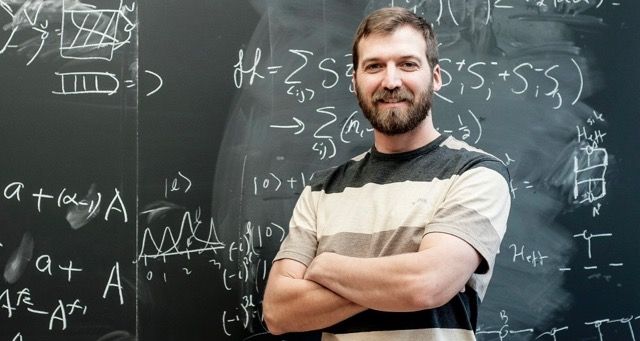 Melko, a cross-appointed physicist at the University of Waterloo and the Perimeter Institute for Theoretical Physics and an affiliate at the Institute for Quantum Computing, is pioneering the transfer of algorithms designed to solve problems in the field of artificial intelligence — machine learning — to generate breakthroughs in the field of quantum many-body physics. His work uses computer simulations to advance the understanding of strongly interacting condensed-matter systems.

There’s something both fitting and full-circle about his work. Canadian researchers affiliated with the Canadian Institute for Advanced Research — CIFAR— were responsible for breakthroughs that turned machine learning into the current hot button of tech. Google, Microsoft, Facebook, Amazon and, it seems, every other large and small player in tech are stampeding into the space. Canada remains at the world’s forefront of AI development with important work taking place in Montreal, Toronto and Alberta.

Melko, the Canada Research Chair in Computational Many-Body Physics and the recipient of the 2016 Canadian Association of Physicists Herzberg Medal, is now building on developments in deep learning research to advance his own, and in the process help Canada and Waterloo Region blaze a new trail in AI and quantum research.

Last August he organized a conference at Perimeter which aimed “to explore the potential of machine learning in quantum research,” and earlier this month penned an article in Quartz that explores the use of machine learning to help advance the creation of the first true quantum computer.

Melko stopped by Communitech recently to talk about his work.

Q – Where are you from and how did you end up at University of Waterloo?

A – I’m from Manitoba, The Pas, five or six hundred clicks north of Winnipeg. I moved here when I was 18. I knew Waterloo by reputation. I applied to many places, but what kind of sold me on coming here was the co-op program. I did my undergrad work here, then my PhD at University of California Santa Barbara.

In my field a PhD isn’t enough to get a faculty position, so I applied for a post-doctoral fellowship. Oakridge [National Laboratory, in Tennessee] gave me a special deal where I would be a staff scientist. So it was like my post-doc, but I would [also] have a permanent job at a national laboratory. I was there two years. There were a couple jobs open in Canada that year; one here and one in Alberta. I applied. So I was just lucky to come back [to Waterloo].

Q – How does a physicist get interested in artificial intelligence?

A – I’ve always been interested in how we model the quantum world with classical computers.

It’s very complex and difficult. In fact, it’s one of the most complex problems in existence – this physical problem of describing the wave function of a quantum material. So we need these massive computers. We have algorithms that we developed and we’ve become specialists in these.

My first student who graduated from my program, a few years ago, she got snapped up by Intel. They had a job fair on campus. She applied, they interviewed her, she gave a talk about quantum physics, and bang, she moved to Portland was working [for Intel]. That was about two-and-a-half years ago.

I got curious: I said to her, ‘So what do they have you doing there?’ She said, ‘Well, they’ve got me doing machine learning in their manufacturing process.’

Apparently her skill set was so desirable that they just snapped her up.

And I thought: Well, why do they want physicists? I started reading more about machine learning, and what the similarities were with the algorithms I was using.

Q – To what degree is AI used in your research now?

A – About a year and a half ago, my post-doc student and I started talking about this. We have all these algorithms that we use for quantum physics. The problem we’re trying to solve is very complex. But so are these problems [in machine learning], such as recognizing faces. People struggled and failed in facial recognition software for decades. And so, from a mathematical complexity standpoint, those are very similar problems.

We wondered: How was facial recognition cracked and how can I take that algorithm and use it to crack problems on my side of the spectrum.

So we started searching these algorithms, basically looking at very standard neural networks and machine learning algorithms, and just did a technology transfer. We just directly took a hand-written digit recognition – if you write a zero to nine, and you want a computer to read your cheque or read an address on an envelope – we just took that algorithm straight from [machine learning] and applied it to our problems.

It worked with almost no modification. It solved one of our problems — recognizing different phases of matter in a quantum system — basically straight up.

Q – And where have you been able to take that?

A – Then we started to crack open that black box and investigate what’s going on inside the same neural network or machine learning algorithm. And then we can study how to tailor that a little bit more specifically to our needs.

So hopefully it’s kind of a feedback loop. AI researchers build machine learning algorithms for a certain purpose: distinguishing a cat from a dog, say. That might not be the same purpose I want it for. I might want to distinguish a low-temperature phase of matter from a high-temperature phase of matter, or something like that. I have a bunch of data, they have a bunch of data. Maybe I can tailor the machine for my purpose but then ask whether or not the modifications I made feed back into industry somehow.

So we still don’t know how that feedback loop is going to work.

Q – Are physicists particularly suited, do you think, to help push AI research?

A – My students, when they see a neural network or a type of AI algorithm, they immediately ask, ‘Why is it designed like that? Does that make sense? What’s the fundamental reason?’

They’re used to questioning why things are structured the way they are.

My students are also used to getting assigned problems that are basically impossible to solve.

It’s easy to put a physicist on a machine-learning project. They don’t have to believe it’s going somewhere, necessarily. They’ll just work on this interesting problem for the sake of understanding it.

Q – Canada was an incubator for early AI research. Does that play a role at all in your efforts push the boundaries of quantum research using AI applications?

A – It’s a testament, hopefully, to [Canada’s] research environment or atmosphere. I guess we ship a lot of our talent to the U.S. Maybe we’ve shipped a lot of our talent but also our general expertise. Hopefully the environment that [made Canada the] cradle still exists. Hopefully the research environment that led to AI hasn’t changed all that that much. I think it makes sense to not only keep critical mass, to keep the spark going here for AI, but to see where this kind of research in general leads.

Q – The research ecosystem here is unique insofar as University of Waterloo, Perimeter and the Institute for Quantum Computing are all located in one area. Does it give this area a leg up?

A – Yes. This is unique to Waterloo. We’re definitely going to be thought leaders in this connection between quantum mechanics and AI. As far as I know, Microsoft is ahead, and Google has [its] Quantum AI lab, and as far as I know, just a few other research groups scattered around the world. So I think Waterloo Region has a real opportunity to be the centre of the universe on that aspect.

Q – You won the Herzberg medal last year, which recognizes outstanding work by an early-career physicist. Tell us about that.

View from the ‘Loo looks at the issues, people and events that shape Waterloo Region’s technology sector.