Ukrainian startups – a story of resilience 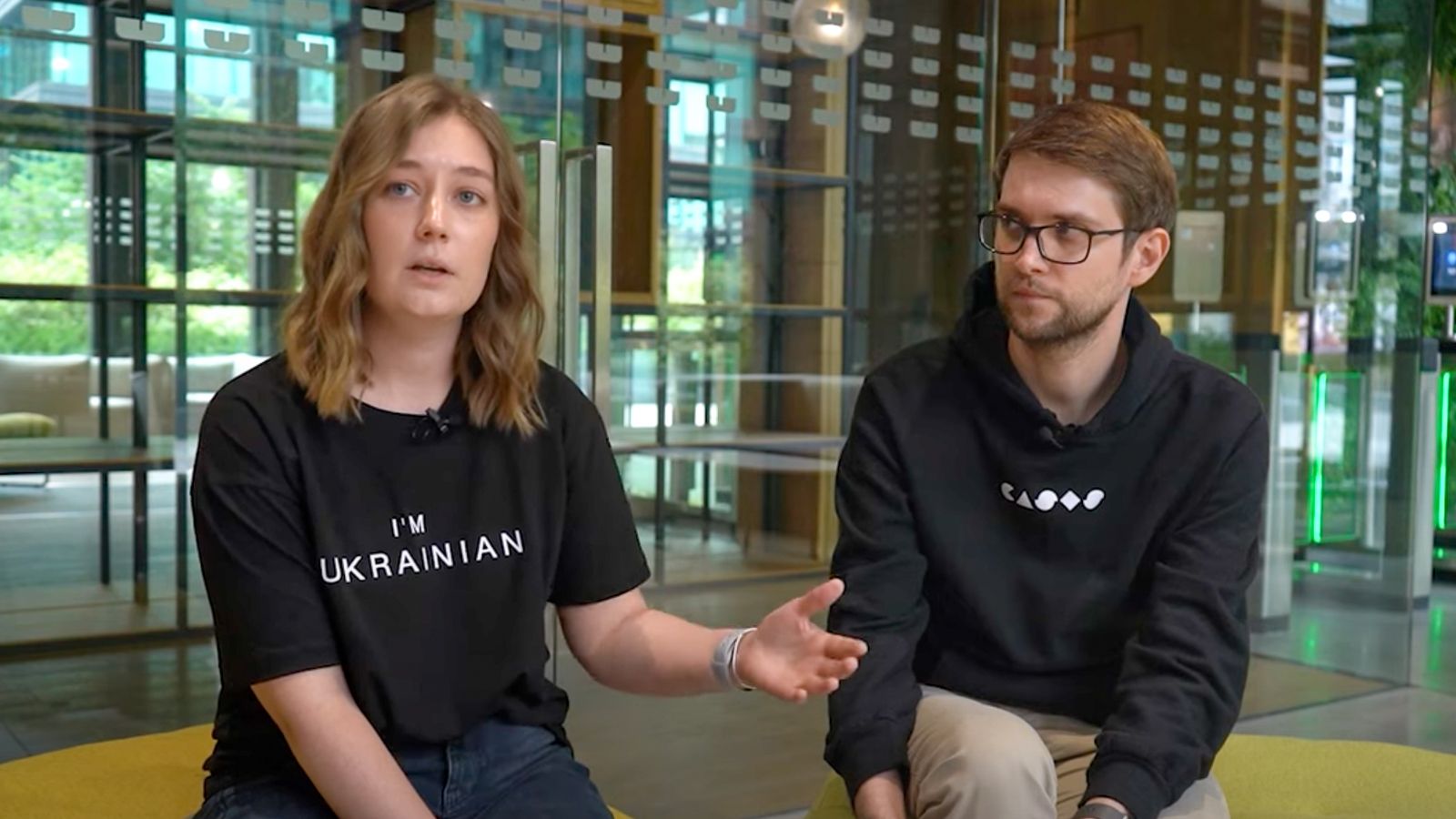 Valeriia Yakovenko (left) and Anatoly Popel of CASES Media, a Kyiv-based social networking company, speak about their wartime experience in Made With Bravery: The Story of Ukraine Startup Resilience, a documentary produced by Canadian innovation advisor Dan Herman. ( Screen grab from documentary )

They sound like founders in any promising tech community – articulate, passionate and optimistic.

And then the wail of an air-raid siren interrupts the interview and sends everyone scrambling down the stairs to the bomb shelter.

Dan Herman’s latest video documentary captures the contrasting reality of life for tech workers in Ukraine, a country struggling to fight off a brutal military invasion by Russia.

The film – Made With Bravery: The Story of Ukraine Startup Resilience – provides a remarkable look at how a thriving tech community rises above the danger and instability of war to continue serving customers, developing products and building companies.

The spirit of resilience and determination is perhaps best summed up by Julia Petryk, Head of PR for a Ukrainian-founded company called MacPaw.

“No business school in the world, no top coach in resilience, no business book has ever taught us about dealing with such crisis, such risk, as war,” Petryk says in the documentary. “When, simultaneously, all teammates are in danger, when you need to make them evacuate to a safer place, and deal with foreign media, and deliver best customer supports at the same time, we have no right to stop, no excuse for us to stop.”

Herman, who earned a PhD from the Balsillie School of International Affairs, is a Toronto-based innovation advisor who has been making tech-focused documentaries for several years. One of his most recent projects – Magnetic Cities – is a video series that looks at how 18 up-and-coming cities around the world are developing tech hubs and attracting talent.

He decided to make the documentary about the Ukraine tech community following a chance meeting with a member of the state-owned Ukrainian Startup Fund at the Collision tech conference in Toronto in June.

As the grandson of a Ukrainian immigrant, Herman feels a deep empathy for the people of Ukraine as they rally to defend their country from Russian aggression. He decided that one way he could help was by giving the country’s tech community a platform to share their story with the world.

“It was exhilarating because you’ve got this opportunity to give someone a platform but it is also a huge responsibility,” he says. “As fun as the trip was, as emotional as the trip was, it was also laden with this responsibility of, like, we’ve got to tell this story and we have to do justice to these people who have shared some really emotional stories about what they’ve been through and about what they're trying to build.”

Working with contacts at the Ukraine Startup Fund, Herman began planning a 10-day trip to Ukraine for the end of September. His contacts helped him find interview subjects, provided advice on getting into Ukraine, and arranged for on-the-ground “fixers” to help Herman and his videographer, Chase Kaiser, secure filming permissions and get around the cities of Kyiv and Lviv.

“We flew into Poland, took the train to Krakow, and then from Krakow we took one train to the border, and then another train – a Ukrainian train – from the border to Kyiv,” says Herman. “Altogether, it took about 40 hours to get from Toronto to Kyiv.”

He and Kaiser spent time in the capital, Kyiv, as well as in Lviv, a smaller city on the western side of the country, near Poland. They conducted interviews with 17 people, including founders, tech workers, investors and policymakers.

One is the pride that Ukrainians have in the quality of their tech industry and in the huge strides the country has made since gaining independence after the fall of the Soviet Union in 1991. Another is the desire to tell the world that Ukraine is a world-class tech hub. And a third is the resilience and determination to survive the Russian invasion and emerge as an even stronger tech nation.

“Ukraine is one of the best places in the world to build an intellectually demanding business,” says Yaroslav Azhnyuk, President and co-founder of Petcube. “If you think about it, a nation that was suppressed for 300 years and didn’t have its own country and now it has its own country, it is like a spring that fires. And you can see that everywhere – you can see that in arts and culture and business.”

Despite a veneer of normalcy in day-to-day life in Kyiv, Herman said the reality of war is never far off. Air-raid sirens, missile strikes and soldiers and military vehicles in the streets are common.

“People would ask me all the time, What do you think of it? And I would I say, it seems normal – there are parents walking their kids to school, we go on the metro and it’s packed, we go to a restaurant and it’s relatively busy. But then the air-raid siren goes off and you see everyone pause and you go through this psychological exercise of trying to calculate what the likelihood is that where I am is going to be hit.”

Those mental calculations are bound to cause a great deal of lasting stress on Ukrainians, says Herman.

“After the war, there will be significant costs because of the devastation to both industrial and residential infrastructure,” he says. “But there’s also a huge social and psychological cost that is going to emerge after the war because of these folks who stayed and who, despite trying to make life normal, still operate with this weight on their shoulders.”

Herman is hopeful that his documentary will be a useful tool for helping the Ukrainian tech community tell its story to the world. The Ukrainian Startup Fund has already shown it at the recent Web Summit in Lisbon, and it is scheduled to be screened at the Rebuild Ukraine Business Conference in Toronto on Nov. 23.

Herman is also hopeful that the film will enable those he interviewed to persuade Canadians to partner with Ukraine now and in future.

“Their stories point to the immense potential that Ukraine’s startup economy has to help the country rebuild after the war, and in so doing, highlight why Canadian investors, companies and policymakers should be at the front of the line to help.”

Kevin Crowley is a Staff Writer for Communitech News. He is a Michener-Award-winning former newspaper journalist with the Waterloo Region Record, and former Director of Communications and Public Affairs at Wilfrid Laurier University in Waterloo, Ont.
iGUIDE and HouseLens announce partnership
News home
M-Theory: Twitter and the fragility of communities