Turn that frown upside down: It’s good for business 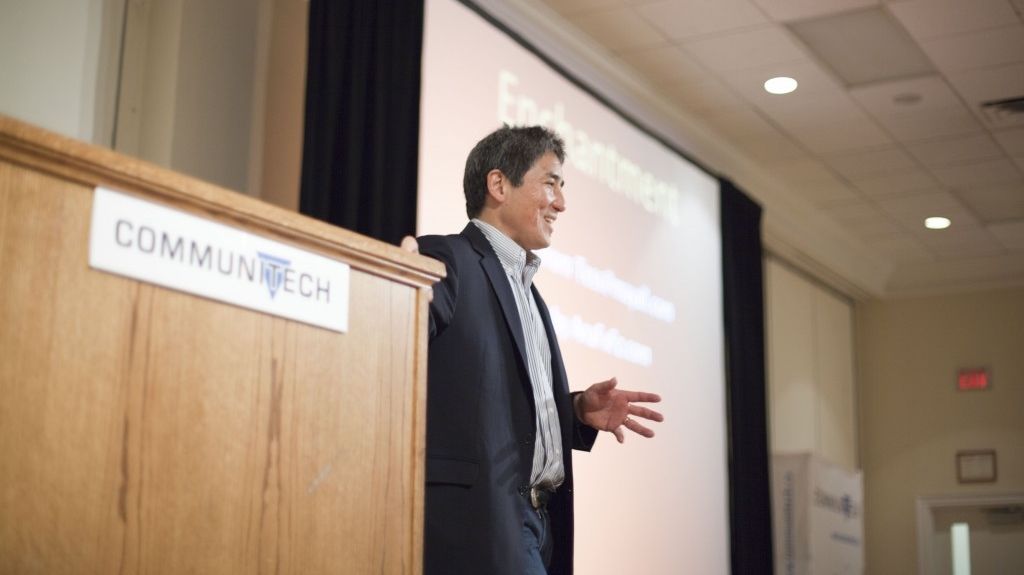 " Guy Kawasaki talks to a full house at Communitech's Level Up event. (Communitech photo: Meghan Kreller) See our Facebook album for more photos from the event.

Grab a mirror. One of your best assets as an entrepreneur is staring you right in the face.

“Crow’s feet are a good thing,” Guy Kawasaki told a sold-out audience of 200 at a Communitech Level Up speakers event Friday morning. “You’re not getting older, you getting enchanting.”

The author of 10 books themed around entrepreneurialism, Kawasaki has created several companies, including Alltop.com -- an aggregator of articles and blogs on a wide range of topics -- and Garage.com, a venture-capital fund. He is special adviser to Google’s Motorola division.

He held the title of “evangelist” with Apple in the 1980s, pitching the wonders of Macintosh products to software developers. More than 1.3 million follow him on Twitter.

Smiling -- wide and crow’s-feet-forming -- topped his list of 10 tips for adding charm and trust in business relationships. Kawasaki’s tips come from his 2011 book,  Enchantment: The Art of Changing Hearts, Minds and Actions.

As passionate about hockey as he is about business, Kawasaki played for the Communitech team against Google Thursday night. He toured the Communitech Hub in Kitchener late Friday morning.

After his Level Up talk, he sat down for an interview:

What is the relationship between enchantment and innovation?

The three pillars of enchantment are likability, trustworthiness and quality, so innovation is part of quality. Most quality things are innovative. It’s a lot easier to enchant people with an innovative product than an crappy product.

You’re an author and entrepreneur. How do those siblings get along?

“With four children, I am more an author than an entrepreneur. I could not start a company today. I can certainly advise a company, but I could not be the CEO, on deck 80 hours a week. It just doesn’t appeal to me anymore. For me, it’s about being an author and a father.

You have a huge online profile and you’re flying around the world on speaking engagements. Do you ever switch off?

You have to understand that there are people who are helping me. So Google+ is me manually; with Twitter, Facebook, LinkedIn and all the other stuff, there are people helping me, so it is deceptive. I have found in my life, the easiest path is to just tell the truth. If you tell a lie, you have to be consistently lying. It’s so hard to do that. For better or worse, I have peopling doing (social media). Guess what? Ralph Lauren doesn’t design every pair of pants he sells, either.

Your first book was The Macintosh Way in 1987. How have you seen entrepreneurism change over those 26 years?

It has become much more democratized. More people try it. It’s also easier to do now because you don’t have to buy infrastructure. You can rent cloud services. Before you had to buy advertising. Now it’s Twitter, Facebook and Google+... It’s cooler to be an entrepreneur now. For a while, people just wanted a steady job.

There are some inherent advantages with being some place where not everybody is competing for your employee. If you’re in Silicon Valley, a good engineer has Apple, Google, Facebook, YouTube, Yahoo -- there are like 15 great companies you could work for. It’s very competitive for people there, and here, there are not that many, and that’s an advantage. If you’re an entrepreneur, you’re going to make it no matter where you are... I find it hard to believe that somebody could justifiably say, ‘My company failed because I was not in Silicon Valley.’"

Communitech and the Institute for Quantum Computing: Detangling the Code
News home
When Guy Kawasaki played hockey with Communitech