This container is green 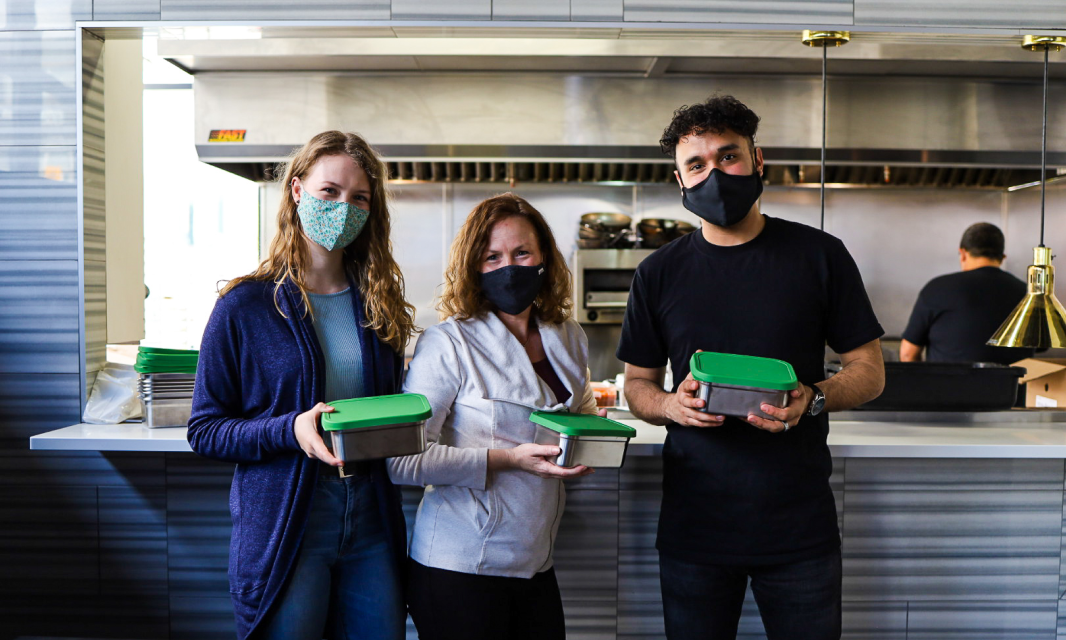 Starting a new company can be a challenge, especially during the middle of a global pandemic. Like many startup founders, the team at Ekko has relied on family support to get through the ups and downs and pivots of launching their reusable container startup. It also helps that the founding team is a family – Crystalle Kruis and Chloe Kruis – one of the first mother-and-daughter founding teams we’ve seen come through our (virtual) doors at Communitech.

“I had worked two marketing co-ops already and many people weren’t hiring, so I chose to go a different route and did what they call an entrepreneurship co-op,” she said. Instead of a traditional co-op work term, students can start and run their own businesses for four months. Beginning in January 2020, Chloe launched a reusable cup service for coffee shops in Kitchener and Waterloo.

Then COVID-19 hit and the coffee shops closed.

“We were planning a pilot and unfortunately couldn’t continue on with the pandemic,” she said.

With the campus closed to in-person learning, Chloe finished her program online and graduated. At the same time, her mom was looking for a new challenge. Crystalle Kruis had previously founded a startup with her husband, Dave Kruis, worked in customer success at an edtech startup and was a ballet instructor for over 25 years.

“It just happened to be that perfect, magical moment,” Chloe said. “We had this idea – can we just move from coffee cups into something else?”

Supporting restaurants by ordering takeout was a weekly way to support local business for both Chloe and Crystalle. “Looking at the amount of takeout containers we’ve been using, we said let’s see what we can do for takeout and take what we learned from all the coffee cup research and see if we can apply it to takeout containers,” said Crystalle.

The timing is great – not just because of the surge in takeout across the country but because of Canada’s upcoming ban on single-use plastics. According to a news release from the federal government, Canadians throw away three million tonnes of plastic every year. With only nine per cent of that plastic going into recycling programs, about 29,000 tonnes ends up in our landfills, or worse – in our lakes, rivers and oceans.

“A lot of the research we have done and what we’ve been learning is that takeout isn’t going away,” Crystalle said. “If anything it is going to be higher than it was before the pandemic.”

With research in hand, Chloe and Crystalle knew there was a way to pivot their business idea to make a difference. “We’re hoping that people are going to start to look at what happened with the pandemic and the kind of changes the government and people can do.”

Chloe and Crystalle are not only betting on restaurants that need to meet the new regulations but on changing consumer demands for sustainable packaging. “Environmental awareness is becoming big with a lot of people using reusable milk bottles, reusable bags. We think the next step is definitely reusable takeout containers,” said Chloe.

Cleaning is one of the main barriers to adoption of reusable containers. Even before the pandemic and the rush to disinfect our groceries, consumers were unsure about reusing containers.

“Some people do bring up the potential spread of germs. We have reviewed the scientific research and all the reports say that the same thing – reusables are just as safe as single-use,” Chloe said.

Reaching and educating consumers starts with working with restaurant partners in the community. From the reusable coffee-cup startup to the pivot to reusable containers, Chloe and Crystalle worked to remove a lot of the potential roadblocks restaurant owners might have. The first question is always cost – how affordable are the containers and what will their use add to the customer’s bill?

“One thing that’s talked about a lot in the environmental space is green accessibility,” Chloe said. Ekko’s pricing is based on the average cost of single-use plastic that restaurants are paying today. “This will only work if we have both restaurants and customers being part of this program.”

The team is also in talks with the Region of Waterloo to find opportunities for support. “When every single stakeholder puts a little bit in that’s affordable for them, then it can help make all this work,” she added.

Ekko provides restaurants with reusable metal containers with silicone lids for takeout. They’re deep containers that seem like they can hold everything from an order of Southern Thai Red Curry from Wooden Boat Food Company to tacos from Underground Flavour Group.

Ekko is testing out customer pricing with restaurants to find what works best – a 50-cent per container fee or a flat fee per order, usually $2.

“It’s a service fee, similar to what you pay when you use another platform like Uber,” Chloe said. “It helps cover our costs, helps cover cleaning and helps us lower the cost for restaurants which increases adoption by more restaurants.”

Once you’re done with your container, you can drop it off at a participating restaurant in Kitchener or Waterloo – hopefully when you’re picking up your next takeout order.

“Eventually, what we envision is that you’ll be able to drop them off at a grocery store or to any participating coffee shops and restaurants,” Crystalle added.

Each container also has an NFC tag for tracking. “They allow us to track the containers as they leave the restaurant and then when a customer returns them,” said Crystalle. “We can also track them at the sanitization station. Knowing where containers are at every point in time is something that has been a huge problem with some of the business models we’ve looked at.” 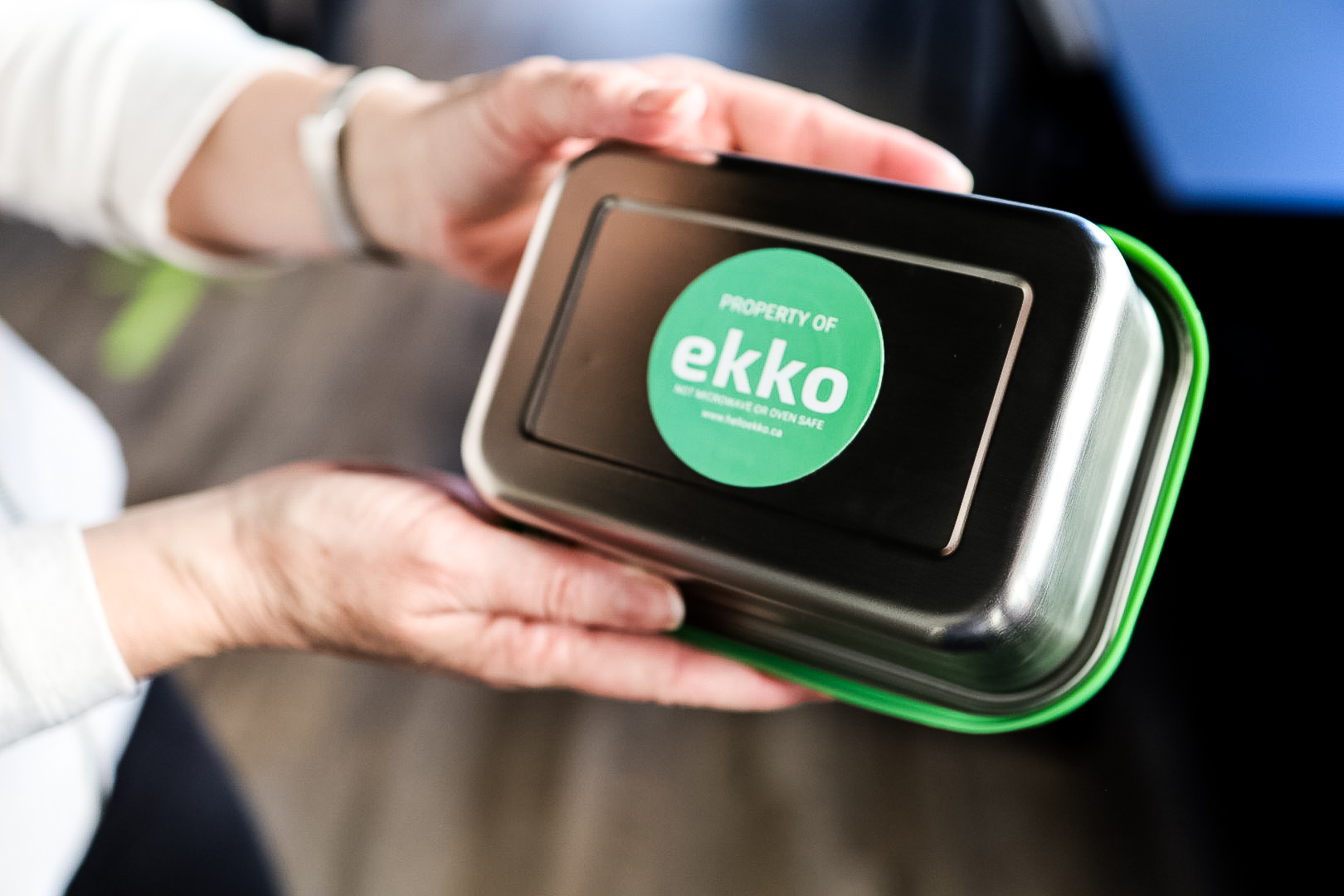 An NFC sticker tracks when the
container leaves and returns to a restaurant or drop box.
(Communitech photo: Alex Kinsella)

One of the pilot restaurants is Underground Flavour Group. Located in downtown Kitchener inside 305 King St. W., UFG hosts an ever-changing roster of pop-up restaurants, from tacos to baos and everything in between. Founder and Director Arnold Yescas said the Ekko containers are a great initiative to help reduce plastic waste.

“What they’re doing is really awesome. We immediately jumped on it right away. We have different chefs coming in here on a daily basis and offering different types of menus, so we have a full variety of different containers coming in and out of here every single day. This is a cool partnership to be able to bring on their containers for every chef that comes in here.”

Underground Flavour Group moved into their current space during the pandemic and, like the team at Ekko, understand that consumer preferences continue to change. With the latest lockdown restrictions in place, Yescas said April is the perfect time to launch the containers.

“We can only do takeout. So I think it’s a great trial month to really, really test the product and their initiative here.” Yescas added that the Ekko launch weekend had a lot of orders and requests for the Ekko containers.

Yescas and the Underground Flavour team focus on being as eco-friendly as possible. Their head of operations has a ban on polystyrene already in place and many of their pop-up chefs are using eco-friendly containers. “Ekko is definitely just going to help encourage all of our chefs to do that and help our customers do that as well,” he said.

Ekko launched at four local restaurants over the weekend: Clementine Catering, Wooden Boat Food Company, Ambrosia Corner Bakery and Underground Flavour Group. The team is excited about getting feedback and working on Phase 2 of their pilot.

“All the restaurants have been amazing to work with; they’re quite innovative and obviously all sustainable-minded,” Crystalle said. “It’s been great to have a conversation back and forth with them and help make this work for them.”

The next phase will see Ekko expand to another six to 10 restaurants. “I love the region; Crystalle has been here for 30 years, so for us, it’s super important to start in the region and build it as a regional program – but yes, it’d be amazing to expand eventually one day,” Chloe said.

You can learn more about Ekko containers and the restaurants that use them at helloekko.ca.

Alex Kinsella is a content marketer and writer in Waterloo Region, Ont. He's behind TL;WR, the region’s events newsletter, and has worked with some of Canada's best-known tech companies in a multitude of roles. His work has appeared in BetaKit, Grand Magazine, Community Edition and other publications.
Data Hub Sessions: Making Sense of Smart Cities with Visualizations
News home
Dejero announces CDN$60-million recapitalization