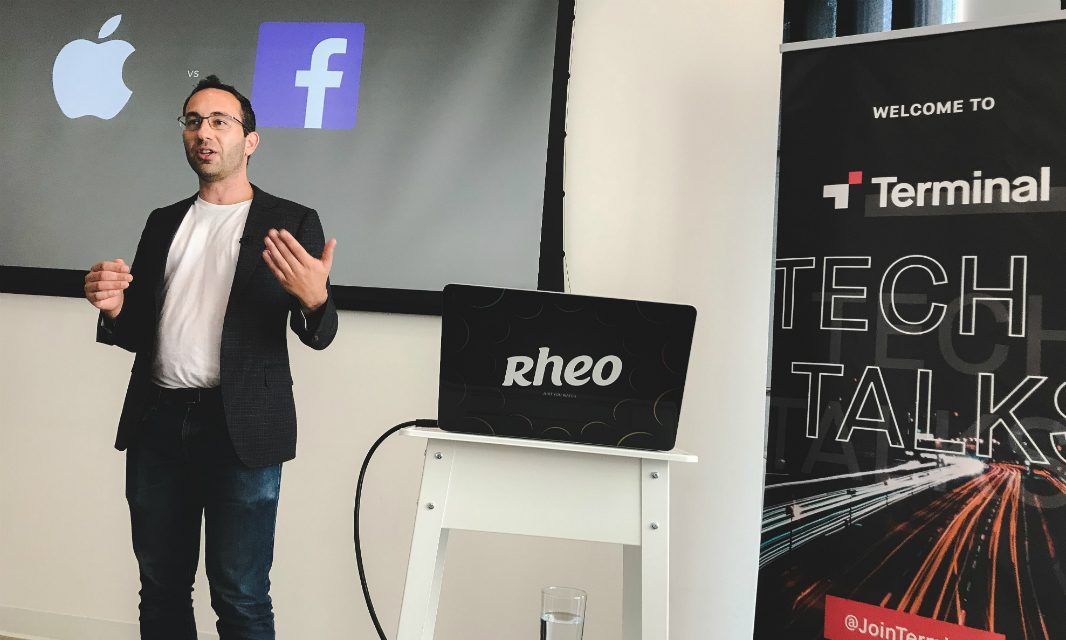 Eighteen years ago, Alan Cannistraro graduated with a BSc in computer engineering at University of Waterloo and up and left for Silicon Valley. Now, after a successful career at Apple and Facebook, he’s moving back, and he’s bringing his startup, Rheo, with him.

“It’s just too expensive [in the Valley],” he says. “Things are too crazy.”

Cannistraro, who created the first app for iOS and who led the team that, in a mere 3 ½ weeks, created iBooks for the original iPad, believes the Valley is no longer a place where startups can grow – that it has begun to implode under the weight of outrageous real estate prices and a culture of excess.

At the same time, he says, Waterloo Region has matured into a thriving, vibrant technology ecosystem that has become an ideal place for a new company to find its footing, making his decision to move here “make a lot of sense for a lot of reasons.”

Others are drawing a similar conclusion – that moving from the Valley is now a necessity. The Economist recently published a pair of articles suggesting that the Valley has jumped the shark, as it were, quoting several startup CEOs who say they’re fed up with the region’s “high cost of living, bad traffic and a ‘toxic’ culture obsessed with money.

“So many startups are branching out into new places that the trend has a name, ‘Off Silicon Valleying’,” the magazine said.

Count Cannistraro among them.

“I’ll tell you a quick little story,” Cannistraro says, speaking to Communitech News from California. “When I made this decision a couple months ago, that I was going to move to KW, I was a little fearful about how my investors were going to react. I thought there might be a bit of backlash from them.

“So I set up meetings and over the course of about three days I told every one of them [what I was planning to do].

“I was really surprised at the reaction. I expected them to push back. And every single one of them was excited for me. I had two of them specifically say that the only startups in their early-stage portfolios that are able to do what they need to with their money are the ones who built teams elsewhere.

“I even had one investor say to me that it was a strike against them if they built an early-stage company [in the Valley]. Is there a new wave happening? I think even investors are realizing it’s not feasible to build [in the Bay Area].

Cannistraro’s startup, Rheo, is a social video platform that curates content for TV, organized into streams based on a viewer’s mood.

“Think of us as Shopify for TV channels. The idea is that publishers and creators can build TV channels in Rheo that they have control over and we sell them features that are unlocked inside their channels.”

The plan, Cannistraro says, is to begin looking for office space in Waterloo Region in early October, just as soon as he completes a financing round. He intends to base six engineers in the Kitchener-Waterloo area and keep one business development employee in California, leveraging what he described as the advantages of Waterloo Region’s talent pool and tech momentum.

“When I left [Waterloo] in 2000, RIM was really just starting to gain momentum,” Cannistraro said. “There were a couple other companies, OpenText and others, but the vibrancy of the startup community wasn’t there 18 years ago.

“It feels like Kitchener-Waterloo has an excitement and a community around startup development that just didn’t exist back then.

Cannistraro arrived at Apple during an auspicious period in the company’s history. Co-founder Steve Jobs, who was ousted as CEO in 1985 after a long power struggle with John Scully, returned in 1997, but the company was flirting with bankruptcy and was far from out of the woods when Cannistraro showed up.

“Apple was going through its worst quarter ever and everybody was telling me, ‘What the? Why are you going to Apple? That company’s going out of business.’

“When I got there, there were 6,000 employees. The iMac had just come out. It was pre-iPod. Over the next 10 years it grew to 100,000 employees and became the most valuable company in the world.”

Apple, he says, taught him the value of passionate employees.

“The most significant thing [at Apple] was the energy. Of course they hired people with technical skill. But the No. 1 thing we interviewed for was, were they enthusiastic? Did they have drive? I think that drove some pretty significant results in terms of success.

“I compare that to other companies where I see the primary acceptance decision [is based on] technical skills in a coding interview, and Apple wasn’t like that. Yes, you had to have some technical skills, but the mentality was that if you had enthusiasm you’d solve whatever problems were thrown in front of you. Everybody worked their asses off there.

“And of course Apple did amazing through those years.”

And then there was Jobs, Apple’s brilliant, mercurial, co-founder.

“Steve was a tremendous leader,” said Cannistraro. “Everybody respected him. And you feared him, too. He insisted on great work and people were motivated by that and wanted to live up to that standard. And they did.”

Cannistraro, who recently delivered a talk at Terminal’s Kitchener office titled, “The Future of Television and Where to Build It,” believes big companies like Apple will continue to drive innovation in Silicon Valley and will continue to attract talent and keep the Bay Area technologically relevant – but with a caveat.

“My two cents on that is I do think there is incredible value in working for some of these companies. Apple, Facebook, Airbnb. These are places people love to work. They’re innovating. They’re moving really quickly. They have the cash to do so. They’re incredible places to learn. I wouldn’t want to say people should forgo that opportunity to learn.

“That said, what I think is happening now is [the Valley is] becoming a place where only the big players are able to really succeed.

“If we talk about innovation and entrepreneurship, I don’t think it’s the place to create any more. I think it [once] was. And the amount of capital [in the San Francisco area] makes it important to have a foot in the Valley.

“But I don’t think it makes sense for startups to be building [there] anymore.”

He described his own difficulty in attracting and keeping talent when big companies, and their big wallets, come calling.

“I’ve lost several hires where Facebook or Google have offered 30 to 60 per cent higher salary. And the salaries I was offering at the time were, we thought, competitive. But it’s just so easy to get overbid.

“Not only that, but [employees would be offered] guaranteed equity packages and things that were tough to compete with. And while I was able to land great employees on my team, I was stuck in a situation where these large companies were still making plays for them. So I was [constantly] fighting to keep my employees.”

And so Cannistraro, who once was a DJ at the UW Bombshelter Pub and president of the UW Engineering Society, will shortly return to his roots.

“The plan is really to double down on KW.”

Craig Daniels is Communitech’s Senior Journalist from. A former sports writer, columnist and editor, he held previous positions at the Financial Post, Sun Media, the Globe and Mail and Postmedia.
Tech Roundup for February 2017
News home
Gord Edall, The Globe and Mail's Director of Globe Labs on the Future of Newspapers