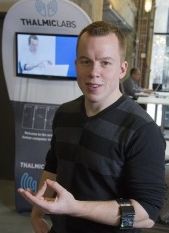 Long meetings and restless nights. An attractive product. A lot of love from investors.

Startups dream of the kind of spring enjoyed this year by Thalmic Labs, maker of the buzz-worthy MYO arm band.

The company announced June 5 that it had closed a venture-capital deal worth $14.5 million -- the largest Series A funding achieved by a company after completing a stay with Silicon Valley’s YCombinator program.

Thalmic expects to move later this year to bigger space in downtown Kitchener. Meanwhile, founders Stephen Lake, Aaron Grant and Matthew Bailey do most of their thinking in the VeloCity Garage, a University of Waterloo startup incubator in the Hub.

The place must have good soil: MYO, which translates muscular activity into commands for computers and other digital devices, has already drawn thousands of pre-orders.

On Friday, Stephen Lake talked about life after the dizzying Series A success:

If you kept a journal, what would your entry say for the last few days?

In reality, we've been working on (Series A funding) for a few months. It actually closed a couple of weeks ago. It's one layer of stress relief to some degree. Now we can focus on the product.

So, what did you do to celebrate?

Know what? We've been celebrating by continuing to work. We've just had so much happening, we haven't taken a pause to celebrate. I think we'll take an afternoon and go do some paintball or laser tag, and get some drinks for anybody. We've been so focused on the to-do list that we haven't really taken a breath.

How did MYO come about?

Matt and I had worked on another project in the area of wearable technology. It was actually a device for the blind to help them navigate ... but it got us really interested in that area.

We realized that a lot of time had been spent, and a lot of work had been done, on output modalities -- displays and so on. But there hadn't been a really good input solution.

So we were brainstorming on how might we interact with the next generation of computer systems ... We saw an opportunity to apply some work I had done previously on the medical-tech side (with the electrical activity of muscles). Wouldn't it be interesting if we could detect that movement and just use that as the interface? We could build some sensors to pick that up.

A couple of months later we had a prototype, and said, "Yeah, we can do that.”

It’s not just business user: We estimate half our (current orders) are actually in the gaming-entertainment side, and most of them are mainstream consumers. The other half are software developers who have other ideas to use it. (In the tech world) we've seen massive success with things like the Microsoft Kinect or the (Nintendo) Wii products, which are both gesture-based gaming. And the MYO offers performance that is many times better ... so there is a big draw in that area for the device.

Often with new technology, we do see entertainment as being the low-hanging fruit where it will start off, then evolve into other applications.

There definitely could be. We've had quite a few developers interested in that. There are opportunities in stroke rehab, for example; or in a clean environment like a medical operating room for manipulating medical imaging. We'll have to see where that goes. It is an interesting area -- one that we haven't explored enough yet.

How important was it for Thalmic to be in VeloCity and the Communitech Hub?

The community aspect of Velocity and Communitech was very important. There were always a few companies that were a few steps ahead of us. To be able to get their feedback, and their experiences, was huge for us. It's a really tight-knit community.

At any given time, there were lots of different people I could reach out to for advice. That tight community, with everybody helping everybody else out without that dog-eat-dog competitiveness, is awesome.

Do you wonder whether the infusion of cash will change the culture of the company?

"There are certain implications and pressures that come along with all that, but we always, internally, had the same ones ... Ultimately, we were able to find (investors) who shared in our vision, and that was an important part of the fund-raising process -- finding the right fit. I think it amplifies what was already there beforehand, like work ethic. One of the most important things going through the process was ... the alignment with what we are trying to achieve.

Christian Aagaard is a freelance writer in Waterloo Region, Ont. He spent 35 years as a newspaper reporter, columnist and editor before he decided to embark on a second career as a bicycle mechanic.
Vouchr launches global gift-giving app
News home
Uptown finds its way and gets MappedIn