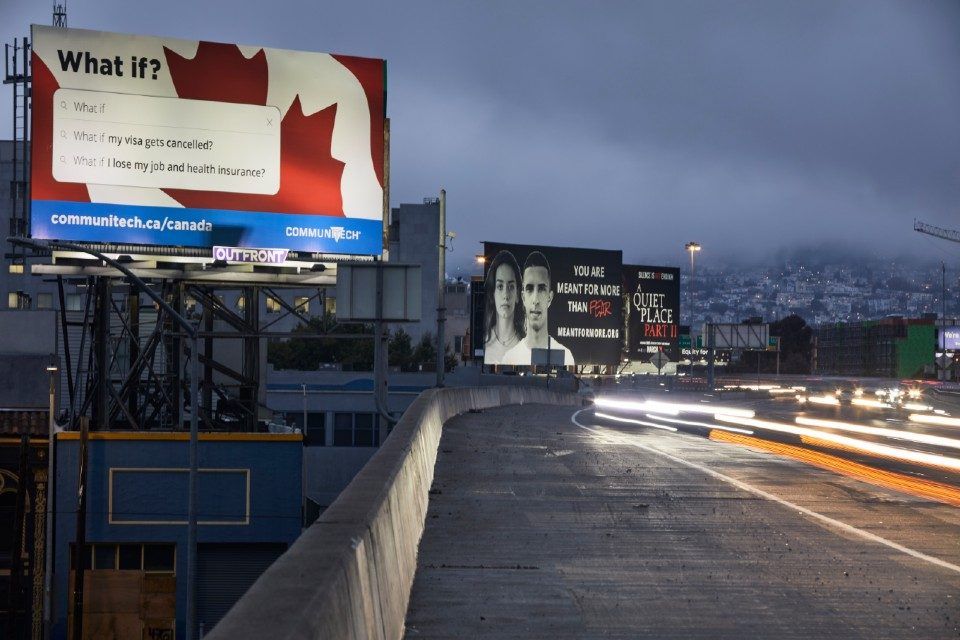 What’s this? Why, it’s a Communitech billboard in San Francisco, part of a six-week digital and media campaign, launched in late July, that aims to help U.S.-based tech workers who are worried about their visa status find roles with Canadian companies. Further details below. ( Communitech photo )

"As parents and businesses region-wide grappled with the implications of the Ontario government’s late-month announcement of a return to classrooms for the province’s schoolchildren, there was no denying the welcome arrival of summer’s heat and restful pace as a balm for a cold spring filled with anxiety over lockdowns due to the worldwide spread of COVID-19.

By mid-July, the region entered Stage 3 of the reopening process, and with it came increased freedoms and a return to a somewhat more normal cadence of life. Bars, gyms and playgrounds were all back in play.

Stage 3’s arrival coincided with a same-day visit to the region from Premier Doug Ford and a pair of provincial ministers, who were on hand for a number of tech-related announcements.

Ford joined Jeremy Hedges, CEO of The Canadian Shield, as Hedges announced the company would begin manufacturing disposable surgical masks. The Canadian Shield was spun out of educational technology company InkSmith in the early days of the pandemic, and has been making face shields and cloth masks while undergoing rapid expansion. The company created more headlines later in the month with the news that it was donating 750,000 face shields worth $7.5 million to teachers and educators across Canada.

But we’re getting ahead of ourselves.

On the same day the Premier was helping The Canadian Shield with its surgical mask announcement, and after stopping at several Waterloo Region businesses, Ford was joined by Economic Development Minister Vic Fedeli, Colleges and Universities Minister Ross Romano and local MPPs Amy Fee and Michael Harris at the Medical Innovation Xchange in Kitchener, where the wraps were removed from a new Intellectual Property Action Plan, an announcement designed to improve Ontario’s and Canada’s IP commercialization numbers and keep value at home.

Fedeli and Romano then attended an afternoon IP-related roundtable discussion at Communitech along with several local tech leaders.

And there was more IP-connected news: The day prior to Ford’s visit, Betakit reported that the Business Development Bank of Canada, or BDC, was rolling out $160 million in IP-related financing “to support IP-rich companies scaling in Canada.”

Not to be forgotten amid its flurry of IP activity, the province released word about funding for 20 COVID-19 related R&D projects, among them a University of Waterloo initiative to develop a mathematical model of COVID-19 transmission which aims to assist in the further re-opening of the economy without causing a virus resurgence.

Waterloo-based Eleven-X, meanwhile, is working to keep people safe and healthy once a return to indoor workspaces begins in earnest, producing a device that monitors HVAC and air purification systems and sends out an alert about air quality.

And the Waterloo Institute for Nanotechnology has teamed up with Toronto-based SiO2 Innovations Labs to create an anti-viral surface coating.

In the same vein, Rapid Novor is confident its technology can assist pharmaceutical companies with development of a COVID-19 vaccine, and to that end announced a $5-million Series A raise. The company is in the process of more than doubling its footprint at Catalyst137 and hopes to double its current workforce of 32 within a year.

Pandemic or no, Rapid Novor and other Waterloo Region firms continued to prove that both investment and sales march forward.

Bridgit, the construction software company, announced a $9.2 investment from San Francisco-based software company Autodesk amid a roaring 72-percent boost in usage of its core product in the last quarter compared to the one previous.

Speaking of raises, Fable Tech, the Toronto-based company that works to make disability-inclusive design easier, announced a US$1.5-million seed round led by Toronto’s Disruption Ventures. Fable Tech was a $75,000 winner of Communitech’s Fierce Founders pitch competition in September of 2018.

You can place Axonify, the Waterloo-based training software company, in the winner’s circle, too. Axonify earned a one-year safety and compliance training contract with Walmart Canada, part of an announced a $3.5-billion investment Walmart is making in its Canadian operation. One of Axonify’s earliest customers was Walmart’s U.S. operation, meaning Axonify now has both in its fold.

“They've been just a phenomenal customer,” Axonify CEO Carol Leaman told Communitech News for an upcoming story. “We've continued to develop products and expand our product suite based on their input and feedback.”

On the topic of contracts, Miovision, the Catalyst137 lead tenant and scale-up specializing in IoT-based traffic technologies, will receive $2.7 million from Waterloo Region to help improve traffic flow.

Traffic’s flowing, and so is angel money. The National Angel Capital Organization issued a report on angel activity in Canada. Angel groups, it said, made 299 investments worth $163.9 million in 2019, the most ever, and nearly 15 per cent higher than in 2018. Women, it said, accounted for 17 per cent of the members of Canadian angel groups in 2019, an increase from 14 per cent in 2018.

Waterloo Region and its burgeoning tech scene emerged on top of the continent in July, scoring No. 1 in the CBRE’s list of the top 25 “up-and-coming” North American tech markets. Quebec City, Edmonton, Halifax and Winnipeg also cracked the top 25. The CBRE is a real estate services and investment firm that operates worldwide.

Talent was a big reason Waterloo Region scored high on the CBRE list, and not-so-coincidentally, there were several other talent-related developments during July.

Vijay Sappani, CEO of Ela Capital, penned a thoughtful piece in the Toronto Star (which also ran in the Record) stating that the recent extension of H1-B visa restrictions in the U.S. offers Canada further opportunity to cream away top worldwide tech talent, and mentioned Waterloo Region’s tech cluster as a made-in-Canada magnet for jobs.

On cue, Bay Area motorists coming off the San Francisco-to-Oakland bridge (known locally as the Bay Bridge) were greeted in late July by a  Communitech-sponsored billboard (see image at top) aimed at alerting tech workers in the Silicon Valley area that they have a made-in-Canada solution for their workplace anxiety – one that ties directly to Communitech’s Outposts program, which gives international workers a way to gain Canadian employment without leaving their resident country.

“People in the U.S., particularly new arrivals, are nervous,” says Communitech Vice-President of Marketing Saj Jamal. “Politics and health are generating uncertainty. We want to let them know that we can help them, that we have a world-class tech ecosystem. And with Outposts we can help our companies hire them.”

The billboards are part of a six-week digital and media campaign. Similarly themed electronic billboards will appear in coming days along the U.S. 101 highway as it winds through the Valley.

And, where jobs and talent go, and for the second time since the pandemic began, Communitech held an online version of Tech Jam, its popular job fair, in July. A total of 26 companies registered for the event, hoping to fill 350-plus roles. Some 950 job seekers took part.

Top talent is always in demand. The Record reported that Jim Moss, former CEO and co-founder of wellness and data company Plasticity, has surfaced as Vice-President of Workplace Wellbeing at the YMCA’s of Cambridge and Kitchener-Waterloo after Plasticity closed its doors last April.

Where closed chapters go, North, acquired by Google in June, announced in an email to customers that it was winding down support for its core Focals smart eyewear product as of July 31.

Another tech festival that has changed up its program due to the pandemic is Elevate. Organizers have decided to cancel the event, normally held in September in Toronto, and partner with the Design Exchange “to launch an innovation hub that will tackle social, economic and environmental challenges.”

Another local tech organization is headed into space. FiberTech Optica’s fibre-optic cables are slated to play a role on the Mars rover Perseverance next February.

Meanwhile, back here on terra firma, earth-bound autonomous vehicles are sure to get a boost with the acceptance of 10 companies into the second cohort of the AVIN Waterloo Ventures at Communitech program. Communitech Vice-President Strategic Initiatives Kevin Tuer talked about autonomous vehicles and the AVIN program in a Kitchener Today article.

The Record’s James Jackson penned a piece about the difficulties women and visible minorities have in accessing venture capital for their companies, featuring the husband-and-wife team behind Sociavore, the platform that helps restaurants create websites.

Diversity – and beer – was the theme of Alex Kinsella’s Communitech News piece about Ren Navarro, the local founder of “Beer. Diversity.” who is working to address the lack of racial diversity in the Canadian beer industry.

This edition of the Tech Roundup compiled by Craig Daniels.

Craig Daniels is Communitech’s Senior Journalist from. A former sports writer, columnist and editor, he held previous positions at the Financial Post, Sun Media, the Globe and Mail and Postmedia.
Patty McCord, on life during, and after, COVID-19
News home
Working on our fitness