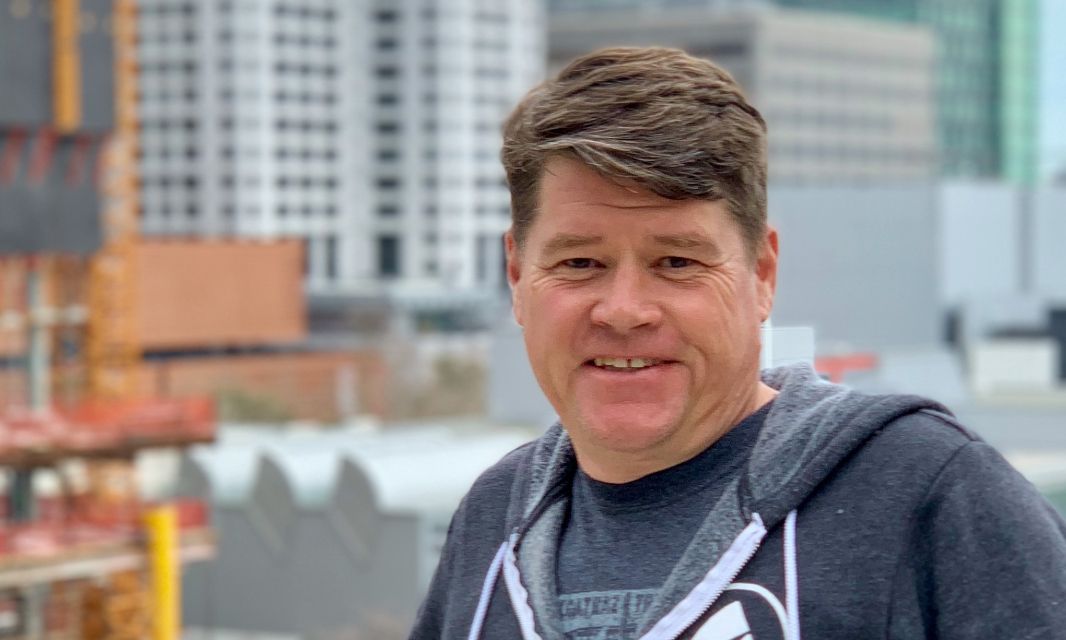 Chris Albinson takes the helm as Communitech CEO on May 17, 2021.

Great leaders pass the baton with the grace and skill of an Olympic relay runner. So it’s no surprise that Communitech CEO Iain Klugman is well-prepared for a smooth hand-off when his successor Chris Albinson starts his leg of the race on May 17.

A passionate Canadian with decades of international experience in tech, Albinson likens Communitech’s approach to strengthening the technology industry to the Canadian Olympic Committee’s Own the Podium campaign.

“As I learned and talked to more people who were involved in those early days of the Own the Podium program, and how that was birthed from and of the athletes, first and foremost, the echoes to Communitech are pretty obvious,” Albinson says. “It wasn’t started as a government organization; it was started by founders for founders, to build up to global success.”

For more on Albinson’s vision and background, check out this Q&A conversation with Tony Reinhart, Communitech’s Director of Editorial.

Klugman, who has led Communitech since 2004, had previously announced his plan to step down when his contract expired in January of 2021. He extended his stay at the request of Communitech’s board of directors last year, after the COVID-19 pandemic struck.

Business and community leaders in Waterloo Region have rolled out a first-of-its-kind program to protect employees of small- and medium-sized businesses and to help stop the spread of COVID-19.

Workplaces are among the biggest hotspots for COVID-19 outbreaks. Screening with rapid tests provides an extra layer of defence by identifying people who are not showing symptoms but may be carrying COVID-19 into their workplaces and communities.

The StaySafe model – designed and piloted in Waterloo Region with support from Ottawa and Queen’s Park – will be developed into a playbook to enable any region in Canada to quickly launch similar programs.

The pandemic’s impact on the workplace was also a hot topic at a Communitech roundtable discussion for women tech leaders and Jill Dunlop, Ontario’s Associate Minister of Children and Women’s Issues. The central theme: Women workers and entrepreneurs are expected to play a key role in the pandemic economic recovery, yet, in the interim, they’re bearing a disproportionate burden of stress and strain.

Dunlop, a mother of three, said the Ontario government’s recent budget “did focus a lot around women.” She also cited a women’s economic task force that she is developing with Peter Bethlenfalvy, the Minister of Finance and President of the Treasury Board.

Eric Meger and his crew at Maerospace are preparing to cross digital swords with pirates and other bad actors on the world’s oceans. The Waterloo-based company combines radar, satellite data and analytics to give countries a real-time view of illegal activity in their exclusive economic zone (EEZ), which stretches 200 nautical miles out from shore. Check out the full story – it’s a swashbuckling good tale.

If I had a million dollars...

… I’d grow my company. More than a few founders in Waterloo Region were humming a happy tune following a flurry of funding deals in April.

One of the biggest deals saw U.S. private-equity firm Luminate Capital Partners acquire a controlling stake in Waterloo-based Axonify for a reported CDN$313 million. Luminate, founded by Managing Partner Hollie Moore Haynes in San Francisco, said its investment will enable Axonify to expand its leadership position in the online training of frontline workers. Axonify CEO and co-founder Carol Leaman plans to stay on. But, as the veteran tech leader told Communitech News in a candid Q&A, this might be her “last rodeo.”

Another big growth play is shaping up as Waterloo-based cybersecurity company Magnet Forensics plans to go public with an initial public offering (IPO) that’s expected to raise slightly more than CDN$100 million. Speculation about the IPO – the first in Waterloo Region since COM DEV spinout exactEarth went public in 2016 – had been circulating for some time before the company filed a preliminary prospectus on April 15. Then, late last week, Magnet announced it had entered into an underwriting agreement to issue 5,890,000 subordinate voting shares at a price of CDN$17.00 – higher than the $14.00-$16.00 range estimated in the preliminary prospectus.

The IPO, which would see Magnet shares trade on the TSX under the symbol MAGT,  is expected to close May 3.

Medchart, which has operations in Waterloo, Toronto and Coppell, Tex., announced a US$17-million seed and Series A raise that will accelerate product innovation and enable further hiring. The startup, which employs about 23 people in Waterloo, has developed a medical records sharing platform that enables doctors, care providers, patients, lawyers and insurance firms to securely share information. It ranked No. 9 on the 2021 list of Canadian “narwhals,” privately held companies with the potential for substantial growth.

From charts to checkups, post-surgery monitoring startup NERv Technology announced a US$2.65-million seed round. The company also secured an additional US$1 million in non-dilutive funding, bringing total funds raised to US$3.65 million. NERv is developing a sensory platform that uses data within a patient’s body to detect post-surgery complications.

In other medtech news, Nicoya Lifesciences announced additional funding and advisory services to help it continue developing its rapid, saliva-based COVID-19 antigen test. This is the second phase of support from the National Research Council of Canada’s  Industrial Research Assistance Program (IRAP). Based in Kitchener, Nicoya uses nanotechnology and AI to make analytical instruments for scientists and medical professionals, and ranked No. 10 on the 2021 list of Canadian health technology narwhals.

From medtech to vidtech (is that even a word?), Waterloo video-connectivity company Dejero announced a CDN$60-million recapitalization that refreshes its roster of investors and positions the company for continued growth. The minority stake recapitalization was led by Vertu Capital of Toronto in partnership with Ubicom Ventures, a special-purpose investment entity set up in partnership with Dejero founder Bogdan Frusina and CEO Bruce Anderson.

Meanwhile, a new network of “superangel” investors in the Toronto-Waterloo innovation corridor has completed an oversubscribed first closing of CDN$10 million. Archangel Network of Funds plans to invest in early-stage, high-growth Canadian technology companies and aims to support a more diverse range of startup founders from a variety of backgrounds. The group hopes to encourage new angel investors while increasing the amount of angel capital available to early-stage companies, said Amber French, an Archangel founder and Managing Partner at Catalyst Capital who also serves as Director of Strategic Capital at Communitech.

Let’s finish the funding play with an assist from Hockeystick. According to a story in BetaKit, a recent Hockeystick report found that Waterloo Region companies raised a combined CDN$689.6 million over the course of 2020 — up 107 per cent over 2019. Noteworthy deals include Faire’s $222-million raise, Miovision’s $120-million round, and ApplyBoard’s $100-million Series C round and a $70-million follow-on extension.

The Canadian technology sector continues to thrive, yet the ongoing shortage of qualified workers is still a challenge. Even with competitive compensation and engaging work opportunities, companies in hot sectors like cybersecurity say recruitment remains a tough go.

It’s not for a lack of jobs, as last week’s Tech Jam from Home showed. The virtual fair featured 51 companies and a combined 2,777 job openings. It attracted 876 job seekers and resulted in 2,706 chats between candidates and recruiters.

Moving talented workers along the Toronto-Waterloo innovation corridor, meanwhile, will get easier with planned improvements to GO Train service between the two regions. As April drew to a close, those improvements passed a major milestone as the Ontario government unveiled a preliminary design business case and a request for qualifications to carry out key work between Kitchener and Georgetown.

What makes for a winning investor pitch? We sat in on a few pitching sessions at last week’s virtual edition of the annual Collision conference. From “don’t be boring” to “show some grit,” a lot of the tips underscored a fundamental truth: investors invest in people, not ideas.

Speaking of pitching, Communitech’s Gen Z future-of-work columnist Jenna Aquino wrote a great piece on how to develop your personal brand and “sell yourself,” then followed up with some advice based on experience she gleaned from six co-op terms.

FairVentures Lab (FVLab) has wrapped up a successful five-year run in Communitech’s corporate innovation space. Asked for some parting wisdom, FVLab Director Dave Kruis noted the differences between cultivating innovation in a startup and in a mature corporation with successful and established processes. Fairfax Holdings, a publicly traded company with a diverse portfolio, decided to wind down the FVLab after helping many of its subsidiaries understand how to innovate while maintaining the best aspects of tried-and-true processes.

And before we leave the topic of disruption, check out Communitech columnist Melanie Baker’s thoughts on the topic.

We’re all feeling the pandemic’s impact on work, learning and pretty much every other aspect of our lives. So what does the future look like?

Communitech has been collaborating with community partners on several “Future of” initiatives, including the Future of Work and Learning. The coalition held a public forum on April 28 to discuss learnings from the past year (you can listen to a recording here, under the Events heading). Communitech columnist Alex Kinsella also took a look at the coalition’s work over the past 12 months. “Over a year later, we’ve settled into a new normal of remote work, a new understanding of contract and gig workers and a whole new set of challenges in ensuring continuity and equity of workplace culture,” Kinsella writes.

Looking ahead, the Communitech-led Future of Retail collaborative is holding a panel discussion May 4 to discuss the “buy local” movement and a call for solutions that could land you a chance to present your “support local” idea to Interac.

Canada’s 2021 federal budget included plenty of news for the tech community. Unveiled April 19, the budget emphasized the role of innovation, green technology and digital transformation in strengthening the economy. A separate section, titled Building an Innovation Economy of the Future, gave a list of prominent tech initiatives, including a Net Zero Accelerator – $3 billion over five years to support decarbonization projects, scale up clean technology and accelerate industrial transformation across all sectors.

Kevin Crowley is a Staff Writer for Communitech News. He is a Michener-Award-winning former newspaper journalist with the Waterloo Region Record, and former Director of Communications and Public Affairs at Wilfrid Laurier University in Waterloo, Ont.
Communitech's $30 million startup incubator announces first cohort of seven companies
News home
M-Theory: On net neutrality, the medium is part of the message