Tech Jam: How a Syrian developer found happiness — and a job — in Waterloo Region 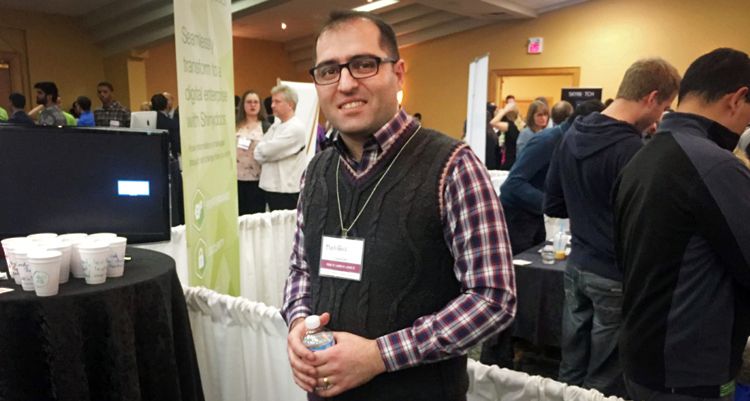 Nineteen months ago Syrian software developer Mahfouz Al-Sheikh was freshly arrived in Canada from Lebanon and was trolling Tech Jam, copies of resume in hand, hunting hard for his first job in a new home.

Tuesday night he was back at Tech Jam, but this time as a representative for Waterloo Region startup Local Line, working hard to help his rapidly growing firm recruit developers and sales staff and marketing specialists.

“It feels good helping people find work,” said Al-Sheikh. “I remember well what it was like.”

Al-Sheikh and his family came to the region in June 2015, not as refugees but as part of the Federal Skilled Worker program. A few days after they arrived he and his wife went to a TD Bank branch in downtown Kitchener to open a bank account.

“The teller asked me what my wife and I did for a living, and I told her I was a software developer and she pointed out the window and said, ‘You see that building? It’s called Communitech. Go there. You’ll find a job.’ ”

Al-Sheikh went home. He did some research. Then he booked a tour of Communitech. And that’s where he heard about Tech Jam. 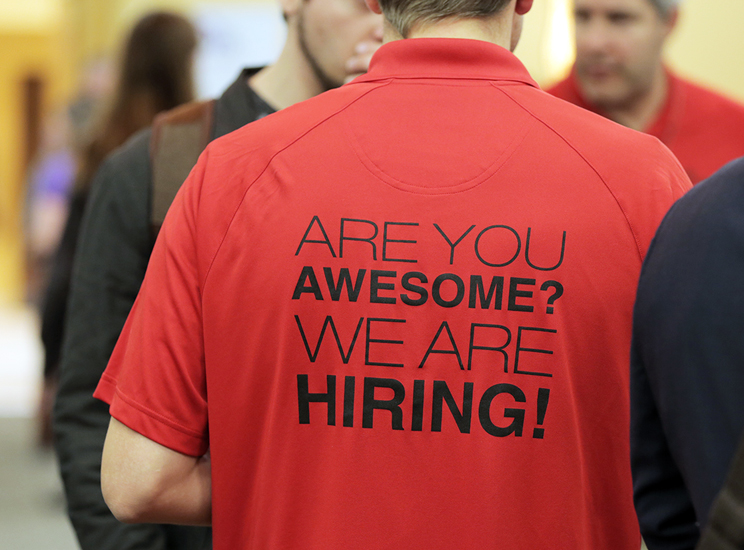 Tech Jam is a Communitech initiative that connects tech companies with tech personnel. It’s a bit of a twist on the usual notion of a job fair insofar as it’s the companies, hungry for talent, who pitch to job seekers. Tuesday’s event, sponsored by Unitron, NetSuite and the Region of Waterloo's Immigration Partnership, attracted a record 764 people hunting for work and 63 companies. Ten companies made pitches on stage to prospective employees.

In his own case, Tech Jam didn’t net Al-Sheikh a job right away, but the event had plugged him into the local tech ecosystem. A backend developer, he kept distributing resumes afterward — “About 130 or 150 of them or so” — and soon enough had 10 interviews. “A few of [the interviews] went to the second level.

“And two of those resulted in contract offers.”

One of those was from Local Line, which he gratefully accepted.

Local Line is an online marketplace for locally sourced food. The site connects farmers and their customers — restaurants, food distributors, wholesalers and the like. It serves as a store, tracks customers and organizes data. And it’s growing. Local Line has four employees and is looking to triple in size this year.

Cole Jones, Local Line’s CEO and founder, says he and Al-Sheikh held their interview at Balzac’s coffee shop at the Tannery.

“About an hour after the interview Mahfouz sent me a lot of information about himself, which impressed me,” says Jones. “And then about 90 minutes after that he sent me a report about our website. He had gone into it, looked at all the code and flagged all these problems.
“The decision [to hire him] was pretty simple. I can’t say enough wonderful things about him.”

Al-Sheikh’s wife, Gladys, is a graphic designer who now works at the Mennonite Central Committee. They have a 3 ½-year-old son, Samir.

He says they chose Canada for specific reasons. It was safe.

And it was cold.

“I considered Australia but I don’t like the hot weather,” Al-Sheikh says with a smile. “I like the cold.”

And he liked what he saw about Waterloo Region.

“I have cousins in Montreal and they told me Canada was a great place to live and raise a family. We chose Waterloo Region after doing some research. We were thinking about Toronto or Ottawa or Waterloo and decided on Waterloo because there are a lot of technology companies here, a lot of startups. At the same time, it’s a small city, so it’s a good place to raise a [family].

Although he and his family had left Syria for Lebanon before the worst of Syria’s civil war began, he knows too well how fortunate they are to be safe.

“People [in Syria] are suffering so much. Not only from the danger, but from the lack of everything. Water. Electricity. Communications.”

Just a few weeks ago he and his wife celebrated the one-year anniversary of the arrival of his parents from Syria, whom they had sponsored as refugees.

Working at Tech Jam Tuesday was Al-Sheikh’s chance to give back. And more turnabout.

“In Lebanon, I was responsible for finding someone to fill my place when I left,” he says. “It was the same when I was working remotely for a firm in Dubai, I had to find my replacement.

Craig Daniels is Communitech’s Senior Journalist from. A former sports writer, columnist and editor, he held previous positions at the Financial Post, Sun Media, the Globe and Mail and Postmedia.
Faire soars to US$7B valuation on latest round
News home
Eric Migicovsky: Walking tall as Pebble orders pile up