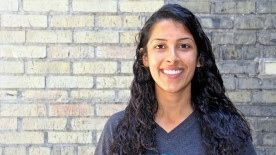 Sameera Banduk’s mother is on the board of directors for the Kitchener- Waterloo Art Gallery (KWAG), but until last month, Banduk had never visited the gallery.

It could be that the Waterloo Region native has been busy. After all, she’s Marketing Director for Kitchener-based Thalmic Labs, an emerging global player in wearable technology whose Myo armband is set for release within months.

If that’s not enough, she’s also planning her fall wedding.

Despite that, the art-loving Banduk, who spent a term in Paris as an undergraduate, was looking for a way to reconnect and get involved with her community after focusing intensely on startups for the last six years.

So, when KWAG set out to encourage young professionals to engage with the gallery, Banduk knew she had found her fit.

From her first visit, she was impressed with the calibre of art sitting just a few blocks from her downtown Kitchener workplace.

Banduk’s event committee dreamt up the idea of hosting a casual gathering around the gallery’s current exhibit, Extraordinary Folk: Selections from the Joey and Toby Tanenbaum Collection of International Folk Art, with drinks and snacks provided by Wellington Brewery and The Ren@41.

“One of the problems is that not a lot of people in this demographic know about the gallery,” Banduk said. “We conceptualized this event about six weeks ago. It came together quickly.”

#FolkArtandBeer (the hashtag is part of the event name) was the first young professional networking event for the gallery. About 100 people attended, including Andrea Bellemare of CBC, and Stephanie Frisina of IMS.

In the networking area, the focus was on, well, networking. The young professionals trading business cards worked in accounting, law, media, sales and tech. Attendees were encouraged to either wander the vibrant folk art exhibit by themselves or in a half-hour guided tour.

KWAG  plans on hosting more of these events as the series develops.

The focus on conversation is important to Banduk, who was influenced by the Parisian way of life, in which people take time to eat, drink and enjoy each other’s company. “The focus [in Paris] is on networking and meeting people,” she said. “That’s how people got jobs. I see that is beginning to happen here more in Waterloo.”

Banduk believes that getting young people in the tech community involved will only help. She doesn’t want to see them only experience life in a tech bubble.

“There’s more that we can do to get involved with the rest of the community,” she said. “We [in tech] don’t need to be our own community. We have a great community to be a part of already.”

Taking time to enjoy a drink and some art is an easy link for the tech community make, she argues. While software developers or engineers aren’t traditionally trained in art history, their background lends itself to enjoying and understanding the artistic process.

Both artists and engineers design, prototype and develop their craft while pushing boundaries and innovating, and as a result, can be misunderstood by mainstream industries.

By making art more accessible to the tech community, Banduk believes she’ll help encourage others to have passions outside of tech, which is something a Parisian would agree is as good for the mind as it is for the soul.

I see and hear that... the City of Kitchener is turning King Street between Young and Ontario streets into a pedestrian-only place for 11 days straight between July 1 and 11... while cars will need to find even more detours during this summer of construction, the Days of #KWAWESOME will see King Street filled with bistro tables, Muskoka chairs and day and evening events... including Tame the Lane, a barbecue in Halls Lane during the afternoon of July 10...Boltmade is hosting OpenHack Waterloo on July 3. The laid-back evening event is open to developers and designers of any skill level to work and learn together... On July 5, the Cherry Festival sweetens up Kitchener’s Cherry Park, tucked between Park and Strange Streets, just a 15-minute stroll from King and Victoria. This child-friendly event starts at 11 a.m., and yes, there will be cherry pie.

Have suggestions about events I should be checking out? Drop me a line or tweet me @write_girl.