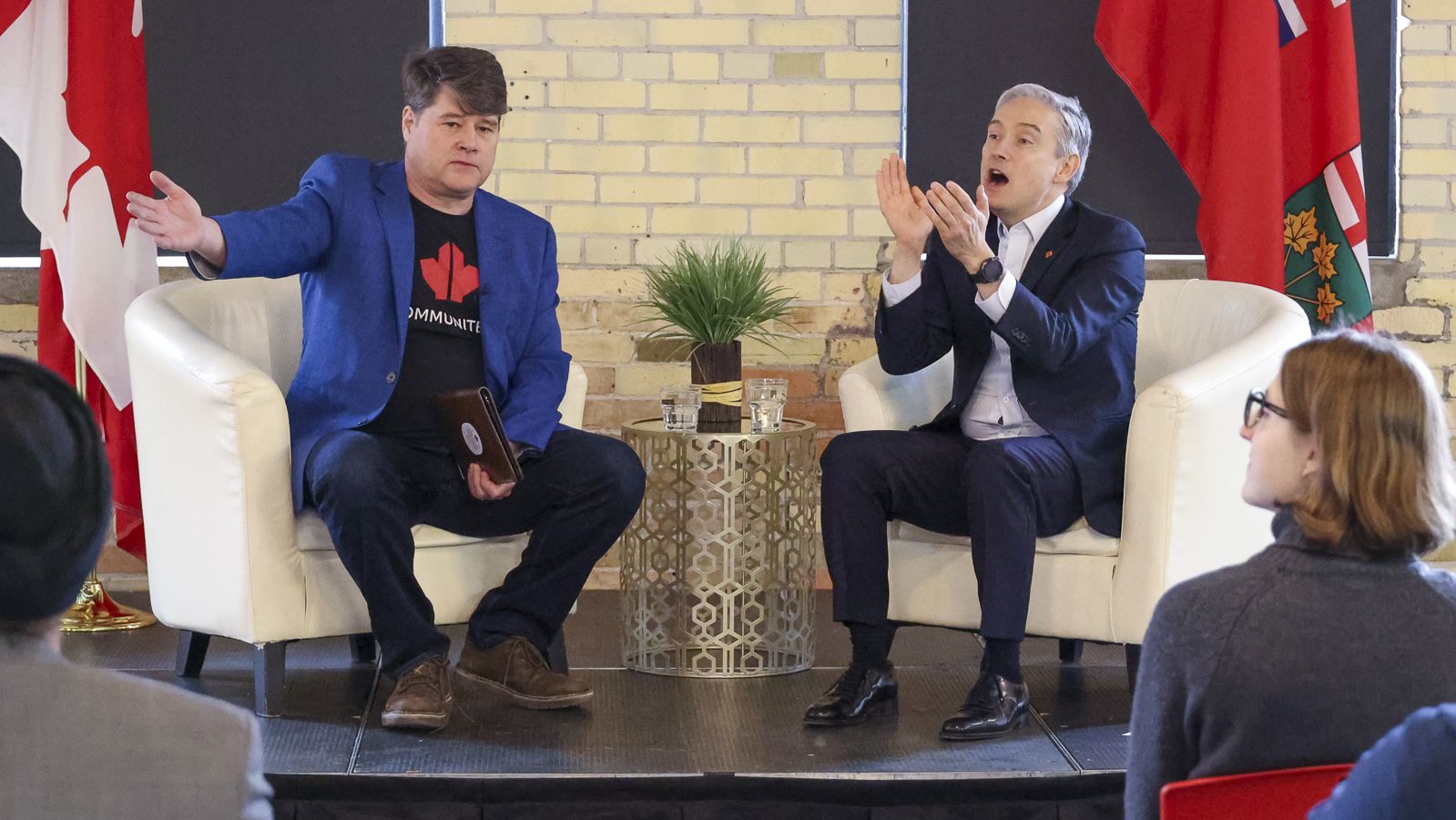 Canada is the best place in the world to invest in innovation and it’s time for all Canadians to work together to “seize the moment,” says François-Philippe Champagne, federal Minister of Innovation, Science and Industry.

“We have everything we need,” Champagne told a packed house during a lunch-hour town hall at the Communitech Hub in Kitchener. “I really believe that the 21st century can be owned by Canada.”

Earlier in the day, Champagne visited the Perimeter Institute for Theoretical Physics in Waterloo to unveil Canada’s new National Quantum Strategy. The strategy is backed by a $360-million financial commitment, first revealed in the federal government’s 2021 budget.

“The National Quantum Strategy will support a resilient economy by strengthening our research, businesses and talent, giving Canada a competitive advantage for decades to come,” Champagne said during his visit to the Perimeter Institute. “I look forward to collaborating with businesses, researchers and academia as we build our quantum future.”

Later at Communitech, the minister took time to meet with tech leaders and tour the Communitech Hub in downtown Kitchener. He even spent a few minutes in an F-35 flight simulator in the RCAF Flight Deck Innovation Lab 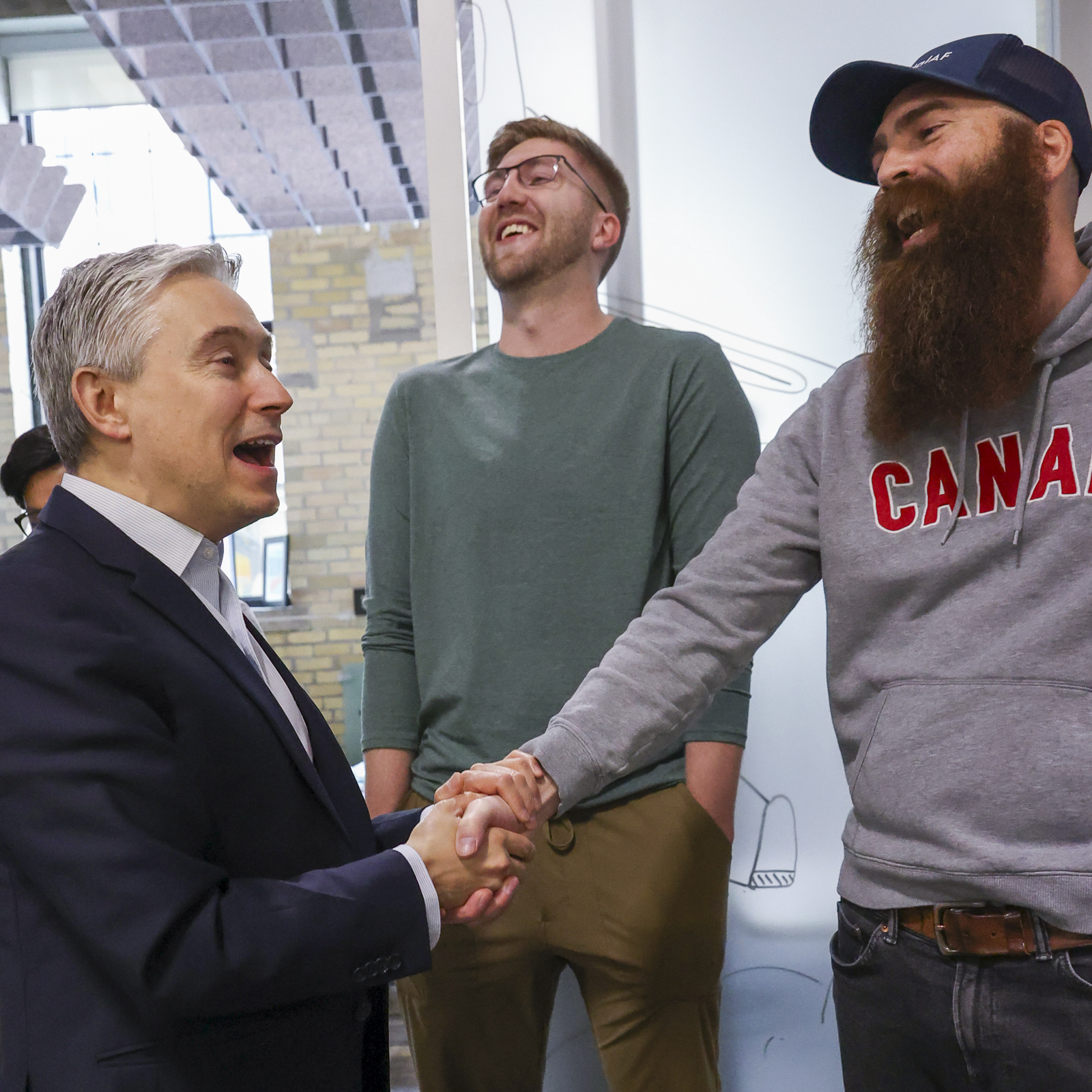 shares a handshake and a laugh with Chris Young, Technical Lead

at the RCAF Flight Deck at Communitech.

“Three loops!!! First try,” Champagne wrote in the lab’s guest book, which his colleague, Defence Minister Anita Anand, had signed just two days earlier during her own visit to Communitech. “Didn’t crash,” Anand wrote after her own successful, simulated flight.

The Innovation Minister’s visit to Communitech – a town-hall style event dubbed “Pizza and Champagne” – was a follow-up to a December announcement in which the minister unveiled the five regional partners selected to deliver intellectual-property programming through the federal government’s $90-million ElevateIP initiative.

Communitech’s share of the funding – $38 million over four years – is the largest portion of the program’s overall budget. It is also one of the largest projects ever awarded to Communitech, a founder-centred organization that excels at bringing partners together to advance Canadian tech.

During today’s visit, Champagne also praised Communitech’s Team True North initiative, which takes a systematic approach – much like Canada’s Own the Podium Olympic strategy – to identify high-potential Canadian technology companies and provide them with the supports needed to scale and thrive in global markets.

The current roster of Team True North includes 60 companies with the potential to grow their annual revenue to $1 billion or more by 2030.

Champagne said he really “buys into” the True North vision, especially the purposeful own-the-podium approach, which sets goals and uses data to identify and support Canada’s most promising tech companies.

He even suggested going beyond the 60 companies currently on the roster to engage other companies that might not be on track to $1 billion in sales but are still growing their revenues significantly.

“I think each and every one of you here can make a difference,” he told the town hall audience, adding that his question to them is: “How can we put the whole weight of the government of Canada behind your success, and how can I become your champion?”

To this end, Champagne said he would do whatever he can to promote the Team True North vision so that Canada engages all of its resources and stakeholders and focuses them on a united goal to promote Canada as the best place in the world for innovation.

The minister, who said Canadians are often “not ambitious enough,” said another reason he likes the True North strategy is that “it’s about winning, it’s about leading, it’s about putting Canada at the forefront.”

From his travels and his meetings with global business leaders, Champagne said Canada has everything needed to attract investment in technology and to become a global leader in innovation 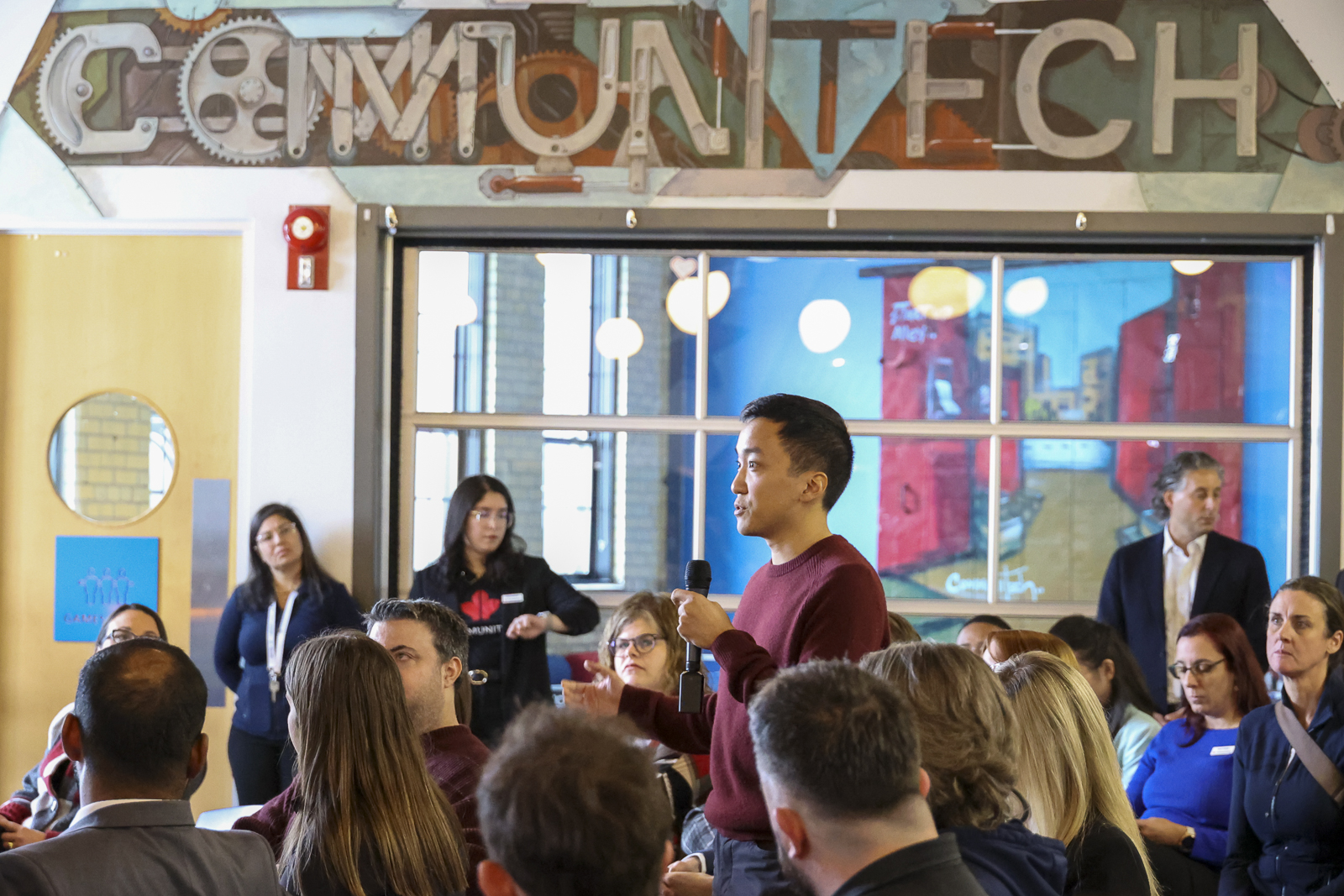 Hongwei Liu, CEO of Waterloo-based MappedIn, poses a question during the town hall

portion of the Pizza and Champagne event at Communitech.

Those things include talent, leading technology, an established ecosystem, and natural resources.

“I can tell you, there’s never been a better time to be Canada,” Champagne said with his trademark high-octane enthusiasm. “We have what the world needs in the 21st century. Let’s seize the moment; let’s be ambitious!”

He also emphasized Canada’s reputation as a trusted, stable nation.

“Canada’s brand has never been stronger,” he said. “In a very uncertain world, a world that is challenged, people are looking for stability.”

In concluding his remarks, Champagne said he would like to carry on the True North discussion at regular intervals, to set goals and check in every six months.

“I hope today is the catalyst for us to really engage,” he said. “And let’s make sure that this is not just us, but that we involve every Canadian… (so that) this is us winning together as a nation.”

Kevin Crowley is a Staff Writer for Communitech News. He is a Michener-Award-winning former newspaper journalist with the Waterloo Region Record, and former Director of Communications and Public Affairs at Wilfrid Laurier University in Waterloo, Ont.
Aligning innovation and national security
News home
Innovative health care