Print anything on everything 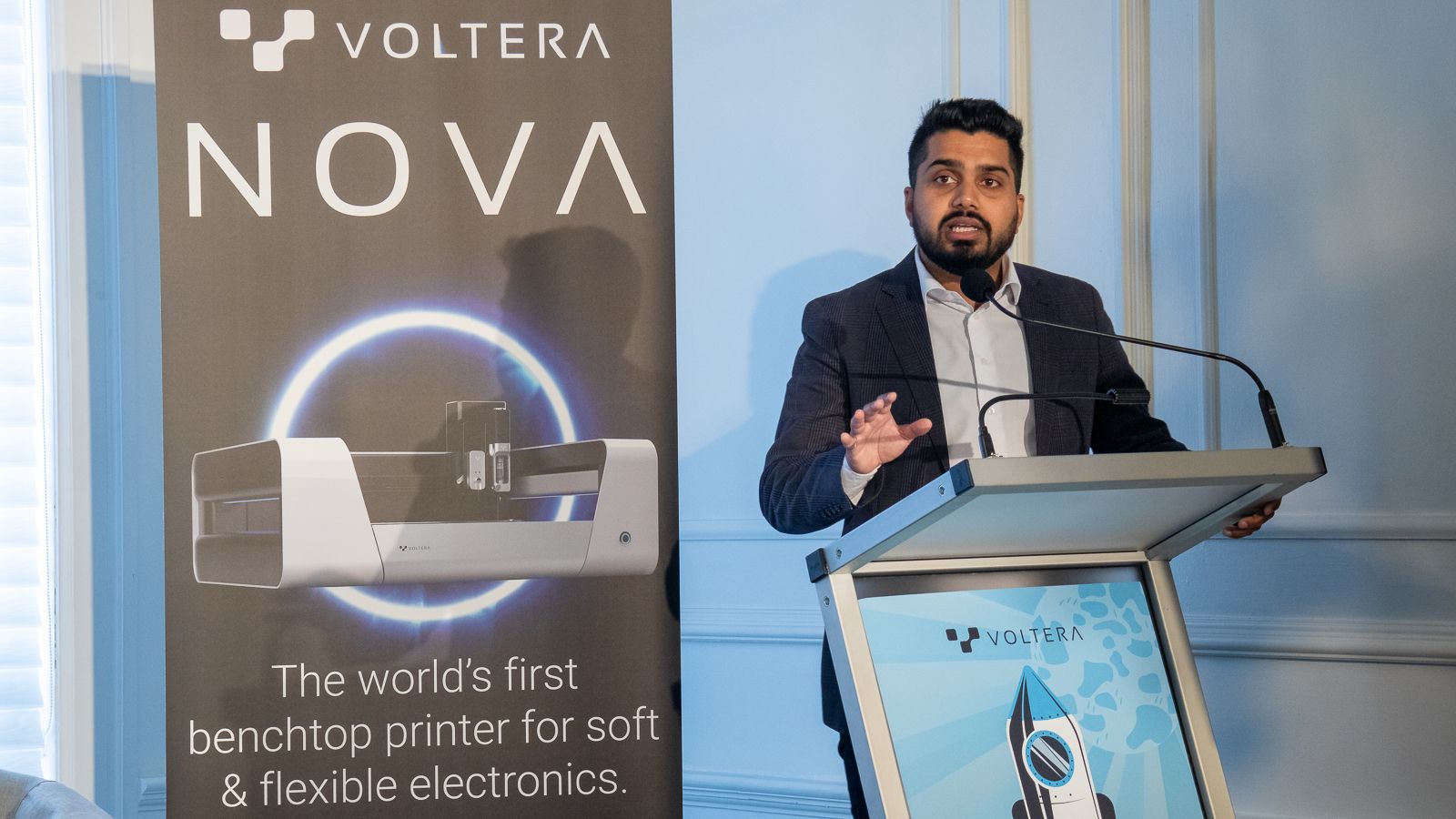 Kitchener-based Voltera Inc. aims to transform the electronics industry with a new circuit-board printer that enables designers to “print anything on everything,” including circuit boards on soft, flexible materials such as film, paper, clothing and biomaterials.

The NOVA circuit-board printer is a desktop-sized machine that empowers prototype-makers to focus on the end use, rather than the traditional approach of adapting the end use to fit the electronics, says Voltera co-founder and CEO Alroy Almeida.

To illustrate the design-electronics relationship, Almeida points to the Apple Airpod. Apple started with the idea that it wanted to create a sleek, comfortable earpiece equipped with its own Bluetooth radio to connect users to their iPhones and iPads wirelessly. Once Apple had a design in mind, its engineers adapted the electronics to fit inside the desired form factor.

“That’s the transformational aspect,” he says. “It’s really much more focused on the end user, the end use case and the human-machine interaction.”

The NOVA builds on Voltera’s first benchtop circuit-board printer, the V-One. Both products enable electronics designers to print circuit boards using conductive inks on a variety of materials using a kind of screen-printing process, rather than traditional methods like copper circuitry on rigid substrate materials.

Both the NOVA and the V-One are designed for the prototyping stage – they enable electronics-makers to experiment, test and iterate their circuit-board designs quickly and cheaply.

Traditionally, a company sends off its early design to a circuit-board manufacturer and waits one or two weeks to get it back and see if it works. With the NOVA or V-One, a designer can “just press print, go grab a coffee, come back and your circuits can be printing right there,” says Almeida.

“We do not create mass-manufacturing equipment,” he adds. “We just help people get there way faster.”

The new NOVA circuit-board printer enables electronics makers to experiment with a wide variety of base materials – even embedding circuit boards into the surface of a satellite, say, or an aircraft wing, or clothing, or biodegradable materials like paper and packaging.

Almeida says the NOVA printer gives researchers and electronics makers a tool that frees up their imaginations and enables them to explore new and innovative ways of incorporating electronics into countless applications.

“It's not just this material freedom, but there's also the freedom to learn, to experiment,” he says.

At a recent Voltera event, York University researcher Gerd Grau – who has used both the V-One and NOVA printers – talked about the potential for this kind of technology to print stretchable electronics, temporary biomedical “tattoos” for transmitting health data, and embedding circuit boards in the wing of an aircraft, say, to measure stress and potential damage.

“Where this will really shine is with applications that were not possible before,” said Grau, Principal Investigator with York’s Electronics Additive Manufacturing Lab.

Voltera evolved out of a fourth-year mechatronics engineering project at the University of Waterloo. Classmates and co-founders Almeida, Jesus Zozaya, James Pickard and Katarina Illic were looking for a better way to do circuit-board design and prototyping.

Shortly after graduating in the spring of 2013, they launched Voltera. The founders spent time in UW’s Velocity program and working with Communitech advisers in the Tannery building in Kitchener. They also spent four months in a hardware accelerator program in Shenzhen, the Chinese city and global centre for electronics manufacturing.

“We would tour these circuit-board factories ­– we met with all of the factories that we were looking to work with, working with their engineers, learning how to design products,” recalls Almeida. “At that point we were just young kids, so we needed all the help we could get.”

In 2015, just two years after launching Voltera, the young co-founders began shipping their first product, the V-One. Today, the Kitchener-based company – which has been financed primarily by revenues rather than outside investment – employs about 45 people and has sold thousands of units to users in 65 countries.

Voltera has been beta-testing the NOVA with researchers and other clients for more than a year. It has pre-sold some of the new printers already, but international sales go into full swing with the product’s official launch today.

“This is a big moment for us,” says Almeida. “But it is also a milestone for the world of flexible electronics.”

Kevin Crowley is a Staff Writer for Communitech News. He is a Michener-Award-winning former newspaper journalist with the Waterloo Region Record, and former Director of Communications and Public Affairs at Wilfrid Laurier University in Waterloo, Ont.
Info-Tech Research Group names new CEO as IT firm marks 25 years
News home
3Tree welcomes SEH to the Unite community