Doing the right thing isn't just about philanthropy; it's a matter of business survival, conference told 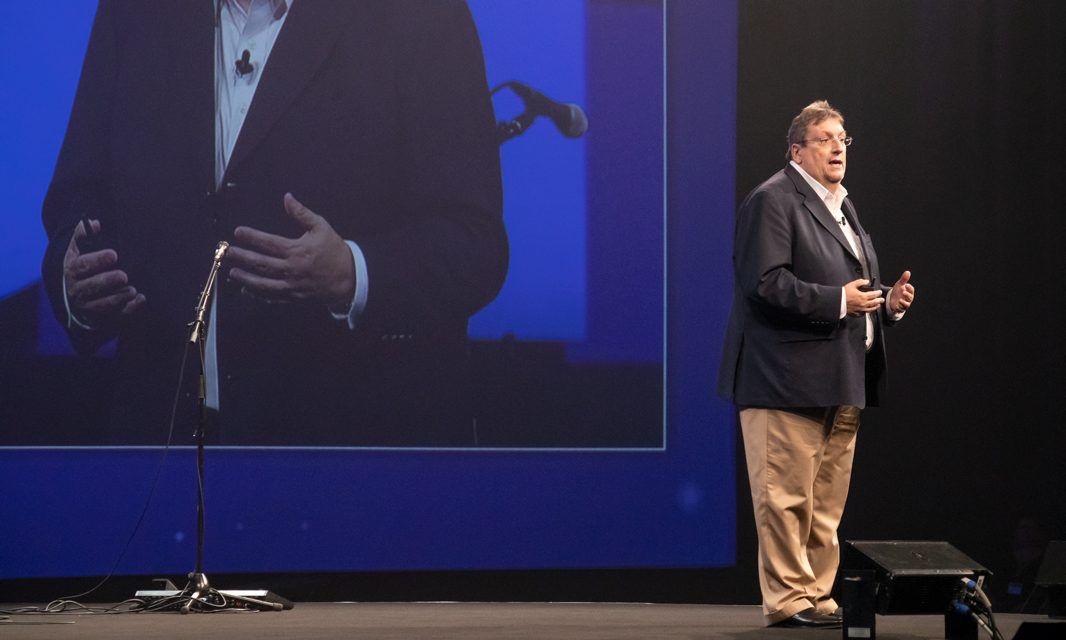 It was an unexpected place to hear the words “disaster of epic proportions,” to say nothing of the source.

Yet, there was Mark Barrenechea, CEO of the thriving, global enterprise software giant OpenText, delivering that phrase at the company’s annual user conference in Toronto last week. And he did it more than once.

Barrenechea wasn’t talking about cyber attacks or software crashes. He was talking about climate change, and what’s in store for humanity if we don’t act now to reverse it.

Barrenechea made the comments last Wednesday during the five-day Enterprise World conference at the Metro Toronto Convention Centre, kicking off a deep-dive session on corporate social responsibility. The session included a talk by author and corporate sustainability expert Andrew Winston, followed by a panel discussion.

The session’s core message, which surfaced at other points during Enterprise World, was as stark as it was simple: Climate change is an existential threat to humanity and, by extension, to business – so businesses can’t afford to ignore it.

“I believe that in our lifetime, and definitely in our children’s lifetime, we will see a disaster of epic proportions,” Barrenechea, 54, told the audience, pointing to a slide depicting how a rise in sea level will submerge much of south Florida if the atmosphere continues to heat up. “It’s time to act.”

For companies big and small, the corollary to such dire predictions can be summed up in a single, more optimistic word: Opportunity.

In the case of OpenText – a 28-year-old, publicly-traded company that grew out of a University of Waterloo project to digitize and make searchable the Oxford English Dictionary – that opportunity is significant.

With 120,000 customers, nearly US$3 billion in annual revenue and 13,000 employees in 100+ locations, OpenText manages the digital information of many of the world’s largest companies. And managing information, the session heard, will play a key role in helping businesses adapt to a world under increasing environmental threat.

As that threat has grown, so has the pressure on companies to respond, and it’s coming from all sides – externally, from consumers, investors and suppliers, and internally, from employees who increasingly insist that their employers conduct business responsibly and sustainably.

One way for companies to do that is through “ethical supply chains” – in other words, making sure the materials and methods they use are environmentally and socially responsible. Digital tools that can track goods and collect data at every step, from the source of raw materials to finished product, can provide that assurance, Barrenechea said.

“OpenText is going to go and solve this,” he said. “We can provide the technology to solve this.” 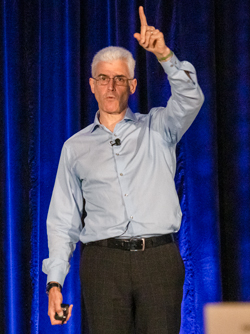 When Andrew Winston took to the stage, he quickly made clear that he wasn’t there to talk about saving the planet, which he said “is going to be fine with or without us,” as some forms of life will likely survive a climate collapse. “It’s about us. It’s about whether we want to thrive.”

That sense of self-interest is beginning to resonate at the highest levels of the business community, Winston suggested, as the conversation moves beyond high-minded philanthropy and into basic self-preservation.

While scientists and environmentalists have been warning of catastrophic climate change for decades, it’s now banks and insurance companies sounding the alarm over its economic implications, he said.

“What’s changed in this discussion of climate has been who is talking about it, who is putting numbers on it, the insurers pulling out of regions,” he said.

Citibank has estimated that unchecked burning of fossil fuels will cost the world economy US$70 trillion by the middle of this century, while “the World Bank says there’s $158 trillion in coastal assets at risk” from rising sea levels, Winston said, adding, “I think that’s probably low.”

Eye-popping figures like that suggest “systemic risk to our society,” a risk that smarter companies are turning into profitable opportunities, increasingly at the urging of their own investors, Winston said.

“Asset managers around the world are pressing on governments and pressing on companies,” he said, adding that many of the biggest American companies have pledged to forge on with ambitious carbon reduction commitments despite President Donald Trump’s decision to pull the U.S. out of the 2015 Paris Agreement on climate change.

“This kind of stuff destroys an amazing amount of value,” he said, pointing to Volkswagen’s vehicle-emissions scandal of 2015 and the collapse of a tailings-pond dam owned by the Vale mining company in Brazil earlier this year, which killed 237 people.

With intangible factors – in other words, brand – making up about 80 per cent of a typical S&P 500 company’s worth, Winston said “employee loyalty, customer loyalty, licence to operate, how you live in the world is the majority of the value in your business.”

The risk of punishment in the marketplace for talent is particularly high, Winston said, adding that more than half of millennial and Gen-Z workers have turned down job offers from companies they view as ethically suspect.

“That’s kind of amazing, and that should scare companies,” he told the audience.

Business can also be caught flat-footed by social movements that can arise and spread quickly, Winston said, pointing to Greta Thunberg, the Swedish teenager whose lone protest over climate inaction last year led to worldwide classroom walkouts by high-school students.

The so-called “clean label” movement is also driving change by increasing pressure on companies to be more transparent about their products and practices, he said. That’s where ethical supply chains – and thus opportunities for information companies such as OpenText – come in.

“What this means is everyone wants to look at their label on food or any other consumer product and know what’s in it,” Winston said. “What are the ingredients; how many are there; is it safe; where did this product come from; who made it; were they paid a living wage; what’s the carbon footprint; what’s the water footprint.

“We need information that’s understandable for everyone, that you can get.”

The opportunity for tech companies does not come without its own challenges. As Winston put up a slide showing a top-10 ranking of countries that consume the most energy, he left Number 5 blank and asked the audience to guess.

The answer? The cloud.

“The cloud is just not very light, that’s the reality,” he said. “It’s why, in some sense, so many tech companies are investing in renewables. They’re realizing their footprint is enormous.”

Apple’s global operations are now powered 100 per cent by renewable energy, while other companies are marketing green data-storage services. Winston said many of these companies are building their own renewable power facilities rather than waiting for public utilities to provide them, and they’re not doing it out of altruism.

“The reason is very simple. It’s economics,” he said. “Nobody is buying renewables, frankly, for their social responsibility. They’re making hay with it; it’s a good story, it’s good branding – but it’s cheaper.”

Circling back to his opening point, Winston said a growing number of companies are realizing it’s very much in their self-interest to recognize these trends and ask themselves why they exist.

“Companies are questioning what it means to be a company. What’s the purpose? Why are we around?” he said. Increasingly, the answer extends beyond making money to something more fundamental: doing the right thing.

“You’ve got [Apple CEO] Tim Cook, running the first trillion-dollar market cap company, saying government is dysfunctional and we need business to step up,” Winston said. “He talks about a moral responsibility – I don’t even think moral is the right word in this – it’s just responsibility. It’s saying ‘we’re part of society, we create jobs, we have to contribute to the countries and communities that we work in.’

“Bank of America’s CEO says, even more simply, that we just have to do what’s right,” he continued, adding that the bank recently announced it will no longer finance companies that run private prisons or detention camps for migrants along the U.S.’s southern border.

With even business leaders such as Larry Fink, CEO of Blackrock – the largest asset manager in the world, with $6.5 trillion under management – calling on the world’s CEOs to “avoid quarterly earnings hysteria” and take a longer-term, purpose-driven approach, Winston said it’s clear that business is waking up to the need to redefine what constitutes success.

“What they understand at their core level is really my core message to you,” he said, “which is that business cannot thrive unless people and planet are thriving.”

On the day after the Wednesday session, Barrenechea took to the main stage at Enterprise World to introduce Peter Gabriel, the British musician and humanitarian twice inducted into the Rock & Roll Hall of Fame. Before the two men had a conversation and Gabriel and his band performed four songs, Barrenechea focused his remarks again on “the responsible business” as discussed the previous day.

“It is time to act,” the CEO told the crowd. “Our children are in the street protesting, taking days off from school, for all of us to act.” 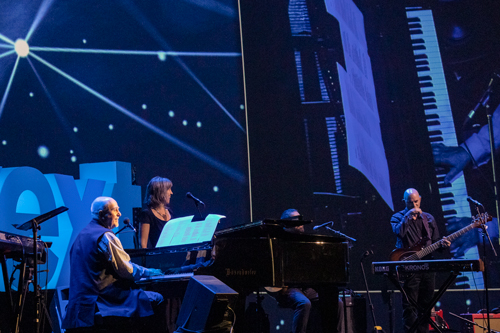 During his chat with Gabriel, Barrenechea asked the musician about an initiative he founded, The Interspecies Internet, that seeks to facilitate communication between cognitive species, such as humans and apes. Gabriel showed a video in which a Bonobos ape tapped along at a piano keyboard while Gabriel and other musicians improvised music from an adjacent room.

“There was no doubt about their intelligence,” Gabriel said of the apes. “They seem much more adept at our language than we do at comprehending theirs.”

“Before we destroy it all, we should maybe try and find out who we share the planet with.”

Anthony Reinhart is Communitech’s Editorial Director and a former newspaper journalist. He held staff writing positions at the Guelph Tribune, Waterloo Region Record and the Globe and Mail before leaving the Globe to join Communitech in 2011.
We Built This : Avidbots
News home
Kik marks 10 years at tech's bleeding edge