M-Theory: Would not buy again 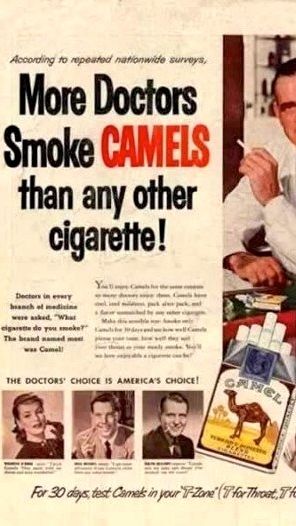 Good selling clearly answers “What’s in it for me?” for potential buyers. It could help me solve a problem, reach a goal, or just get me something I want (for which you may have catalyzed my desire in the first place – well played). This requires knowing your audience well, and applies far beyond just getting into the Top Charts in the App Store.

Bad selling is… well, lying. Over the years we’ve put a legal framework around what you can claim, at least in some areas, like consumer products. Ever wonder why many major ad campaigns have taglines that pretty much say nothing, or don’t even make sense? Yeah. That’s what makes vintage ads so hilarious (and often horrifying) to peruse – they were able to claim just about anything.

The advance of technology and the advent of the Internet have been of incalculable benefit to buyers of all stripes. Not only do we now have near endless choice (and crazy delivery options), we can learn pretty much everything about the companies selling, and how they treat those with whom they do business. This goes well beyond website content and online shopping carts.

It’s impossible for us to be experts on everything. Fortunately we have exposés, review sites, blog posts, tweets… People aren’t shy about sharing things they’ve learned or expressing opinions on things they bought or customer service experiences. And this doesn’t just apply to buying stuff. Tech is forcing evolution in selling in ways that you may not have thought of.

Many tech companies are locked in a seemingly eternal struggle to find enough good development talent. The perks offered at companies like Google and Facebook are well known. Top software engineers get treated practically like star athletes. But if there’s one defining characteristic of geeks, it’s that they are driven to understand how things work. That goes for selling to them during the hiring process, too.

Wait, selling? Well, sure. What do you think a compensation package is? And base salary is just one small aspect of it. Once geeks have broken things down, including job offers, and analyzed how they work, many of them share to help other geeks learn, too. That goes for stock options as much as for StackOverflow.

Good luck trying to pull one over on such prospects. Not only will they find out where you’re being duplicitous and tell you to bugger off, they’ll tell their entire network (or half the internets, depending on who they are and their audience).

While companies don’t need to post on their websites how they craft their compensation packages, they do have to be clear and up front with prospects during the hiring process. After all, tech talent has plenty of other options, and they know what truly offering something “competitive” looks like.

Women are another audience who are becoming increasingly savvy. Because we have to. These days, working women and two-income families are the norm. What the “average” family looks like keeps changing. More women are heading single-parent households, or forgoing marriage and doing things like buying houses on their own. (Some stats on that.)

When you’re the decision-maker, you’re also responsible for educating yourself. Women are already quite likely to use online resources to share information, and they’re catching up to men on doing things like research online as well.

If you consider women in tech, salaries tend to be fairly high compared to many other segments, and so women potentially earn more and have more disposable income. And let’s face it, when you’re used to being the only girl in the room, you’re more likely to learn to speak up, ask questions and call bullshit. Being a wallflower simply doesn’t pay, whether you’re in your CEO’s office or your financial advisor’s.

Whether in the role of homebuyer or Ruby developer, women can’t just smile and nod and let hubby handle the finances. The technically inclined are also more likely to start online than in-person. And many women gravitate to other women for advice and education in areas like financial matters. Hence the popularity of female finance gurus (in Canada, anyway) like Gail Vaz-Oxlade and Kerry K. Taylor, who, unsurprisingly, have extensive, active and valuable online presences. They make it a damned sight harder for the unscrupulous to try and treat us like the “little lady”.

Tech has not only brought us more things we can buy than ever before; it’s enabled us to know more about those things and those selling them. Common sales tactics used on our grandparents are laughable now. Whether we want RRSP matching or a new MacBook Air, perhaps the most important thing for evolved sellers to understand is that, before we ever exchange a word with you, we already know what’s in it for us, and we’re focused on getting it.

Melanie Baker has a Mennonite background, a career in tech, and enjoys the unlikely ways these things complement each other. She enjoys writing, working with geeks, building communities, baking and creating fanciful beasts out of socks.
Aeryon Labs introduces Map Edition bundles for Aeryon sUAS
News home
Tell a story and build a community: Indiegogo’s Ayah Norris on crowdfunding