M-Theory: What Blackbeard can teach us about branding 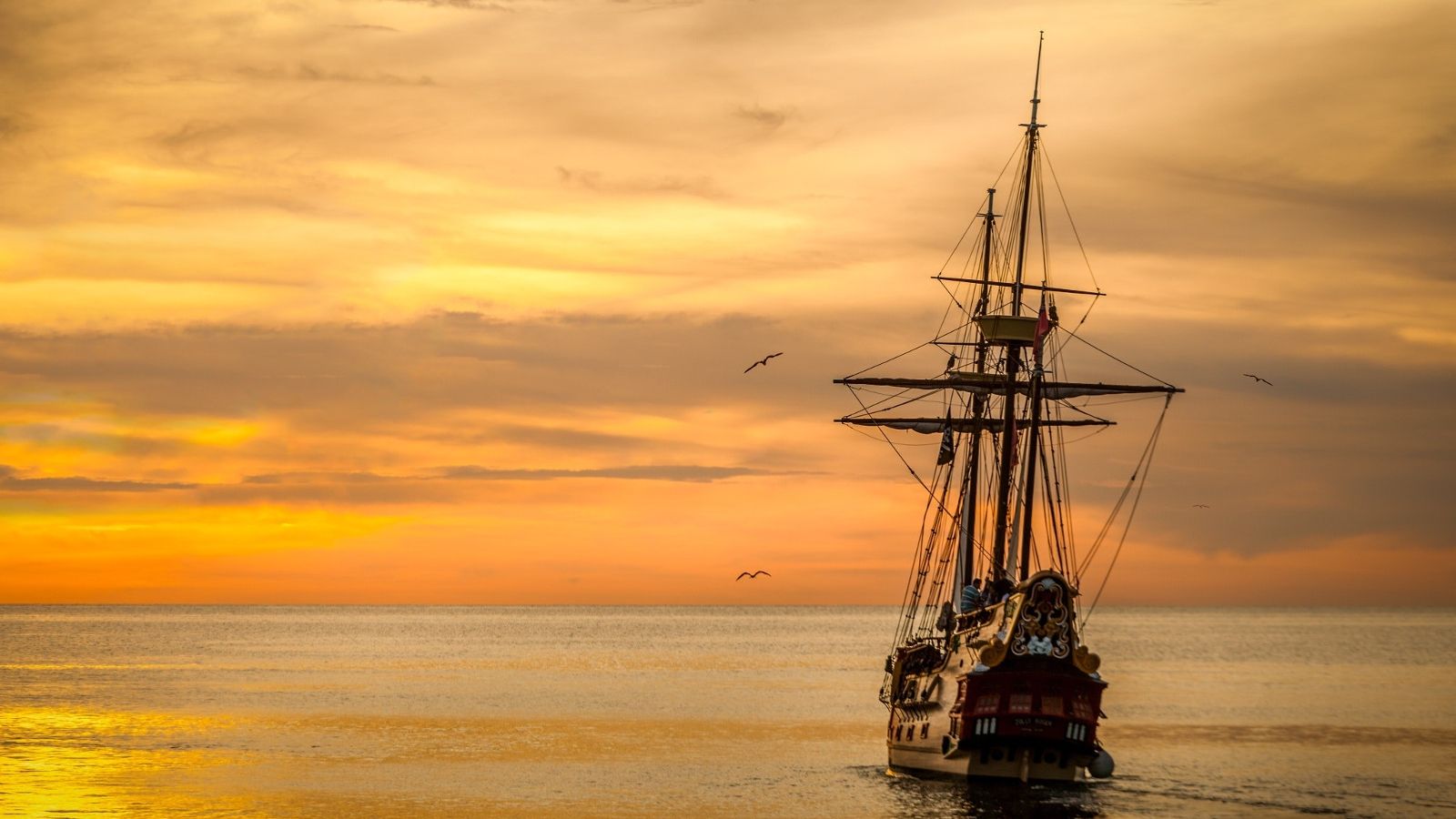 On the show Our Flag Means Death, the character Ed, more popularly known to history as the pirate Blackbeard, goes on a bit of a rant about the Blackbeard “brand”:

“Blackbeard always wins. That’s the thing. He can’t fail. It’s not even a challenge any more. People just see the flag and they freak out. ‘Blackbeard!’ And they basically just give up. They surrender. What’s the point? I don’t even need to be on the boat. I’m a ghost. There’s no chaos. There’s no drama. There’s no f***in’ life!”

Poor Blackbeard has become… legendary. From what we know of the real golden age of piracy, the real Blackbeard may well have been that good at marketing and self-promotion. Evidence is lacking that he ever killed anyone. Personally, at least.

Did he intend to become Blackbeard when he embarked on a life of piracy? Why did he continue to be/play Blackbeard so long, if he’d become so dissatisfied with it? Doesn’t matter for our purposes. Plus, the real man’s been dead for over 300 years so he can’t really weigh in. There are some hints in the show as to how he developed the Blackbeard “brand”, but… spoilers. Also, consistent historical accuracy isn’t really what the show is about.

Attention is heady stuff. As is popularity. And power. And winning. Blackbeard has all of these. Other pirates treat him like a rock star, and the captains and crews of the ships he and his crew attack cower in terror before they’re even boarded (see above rant). His crew can just waltz in and take whatever they want.

By any measure of the pirate life, that’s the pinnacle of success. Untold riches, unquestioned respect, and no rules to live by besides the ones he makes. Literally the power over life and death. And yet, by his own admission earlier in that episode: “I’m bored out of my skull, man. Is this all there is? I shouldn’t be bored. I’m f***ing Blackbeard.”

There are some interesting questions to explore here about how brands are built and maintained; who, ultimately, owns them, and how to consider their lifespan.

That’s supposed to be the goal, right? Build a company, product and brand that’s not just industry-leading, but industry-defining. Where you don’t have to spend money marketing something, because everyone already knows it. Association with that brand makes other brands more successful. But at some point along the continuum of capitalist success, there can come a point where your brand is no longer yours. Or at least not only yours.

If you’re fortunate (maybe), the “ownership” passes to the consumer, based on their deeply entrenched love for and loyalty to your brand. Everything from dedicated purchasing behaviour to tattoos of your logo. Of course, then you can’t change the brand. Like, ever.

There can also be a sort of transcendence, where your brand isn’t really a brand anymore. It becomes what’s called a generic trademark or proprietary eponym. Kleenex, Band-Aids, Bubble Wrap, or Q-tips, anyone? Once that happens, how do you even market the brand any more? How do you try to iterate on it or introduce new products? (Sorry, New Coke.)

When a brand becomes generic, you can retain the profits, but you lose the prior influence and sex appeal. Are you still popular when you’ve become a geographical feature on the retail landscape? Does anyone really pay attention to you, other than marketers trying to figure out how to follow in your footsteps?

Honestly, if the Blackbeard brand had gone on long enough, it would have become kind of embarrassing to be attacked by him and his crew. Like, OMG, Blackbeard attacked my dad’s ship.

People (celebrity brands) can sometimes afford and manage to go out on top, but companies don’t want to just retire flagship product brands. They’ve likely spent years building them up and nurturing them. Poured millions into development and marketing, and probably millions more fighting off competition and/or potentially detrimental legal issues. And, most importantly, the revenues!

But what about if something really bad happens? Maybe the company made a major misstep. Or someone highly undesirable said or did something that got the brand associated with them. That can sink brands and companies.

Or what if newer and sexier options start to erode market share, the brand loses its shine, and revenues start to decline? How do you reverse that? Or when do you decide it’s time to pull the plug? Especially if it’s for a brand that’s gone “Blackbeard,” so to speak.

There are occasions when fandom will decide to sever art from the creator. Usually when the creator has been revealed to be awful. The artist is denounced, and the art is “ours” now. (A lot could be said of this phenomenon, too…)

In a similar vein, once a brand has a sufficiently entrenched fandom or dedicated enough customer base, or has become one of those proprietary eponyms, the company no longer really owns that brand.

Try and defy the will of the people at your own risk, companies. The internet, particularly, is not a forgiving place. What is a company to do? It’s almost like a persistent squatter situation. (The embodiment of this friction with Blackbeard and his unwanted brand in the show is his right hand man, Izzy Hands, loosely based on the real pirate Israel Hands.)

Another risk is a company becoming oblivious. They may be like Blackbeard and their success has become misery. Who cares about the wealth or the power, or even living any more, really? Their perspective narrows so much they can only see what they can’t have, haven’t achieved or no longer want.

They can’t see how cool and enviable they look to everyone else. (There is a scene in Episode 7 of Our Flag Means Death that illustrates this well.) Or they’ve bought into their own hype and have become toxically egotistical. They’ve been so wildly successful up til now, they become deluded that it’s an innate quality, not a marketing result. That it’s got to be a permanent condition, despite the fact that nothing ever is.

Either is risky because it tends to erode both likability and hero worship, not to mention make it way easier, and far more likely, for a brand to make off-key choices or offensive mistakes. Memento mori also applies to companies and brands, and we’d do well to remember it.

Now, there are gazillions of brands out there, and very few of them reach that level of transcendent success, be they product or pirate. If that is your goal for your product or life on the high seas, I wish you well. I have no playbook to help you get there. (Getting Taika Waititi on board – who plays Blackbeard, directed the pilot, and executive-produced – probably wouldn’t hurt.)

Should all companies plan for the possibility of their brands reaching that level of success? No. Nascent brands – or even established but not spectacularly successful companies – need to direct their energy into becoming brands. Building up awareness and enjoyment of what they offer. Treating people really well. Or, y’know, in the case of piracy, inspiring terror and compliance.

There is no one guaranteed path to success, and no guaranteed way to remain on top inevitably. Blackbeard can’t help us here, either. In reality, he died violently, likely before the age of 40. And there were pirates who were richer, more powerful, and who did manage to retire and disappear with their vast wealth to possibly live long and prosper.

Funny thing, though. There’s a good chance you wouldn’t even recognize their names. But 300+ years after the golden age of piracy, while we don’t know that much about the real Blackbeard, his brand nonetheless lives on. Captain Morgan and Long John Silver could probably relate.

But where do you start? Well, since there aren’t a lot of sloops or galleons to steal these days, I guess it can’t hurt to try to buck convention, solve people’s problems, or at the very least help them be successful. Never stop thinking, planning or being creative. It’ll diversify your marketing and your brand(s), expand your opportunities, and make you less likely to get stuck forever associated with a brand you’ve outgrown and bored out of your skull. With piracy or otherwise.

Melanie Baker has a Mennonite background, a career in tech, and enjoys the unlikely ways these things complement each other. She enjoys writing, working with geeks, building communities, baking and creating fanciful beasts out of socks.
EnPowered and Ecopilot partner to deliver superior energy savings
News home
Nicoya completes acquisition of LSK Technologies, expanding digital platform into molecular testing