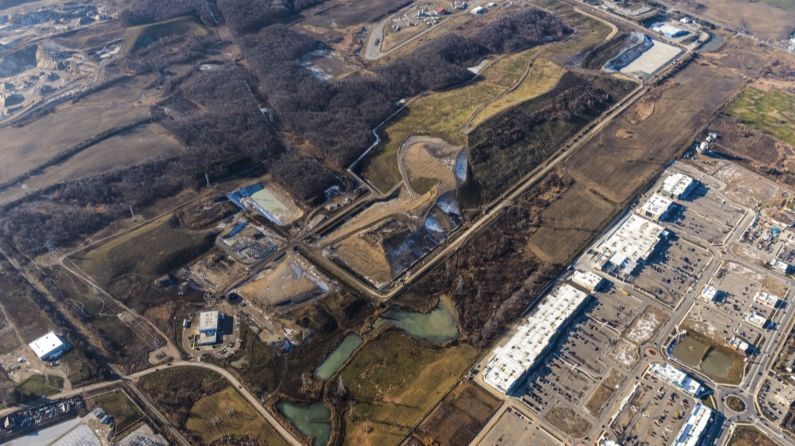 Photo: Waterloo Region’s landfill site has an estimated 15 to 20 years of capacity left, but waste diversion efforts could extend its lifespan.

While it would probably be easy for us never to go beyond startups and software for our Girl Geek Dinner presentations, cool science and tech can be found in some unexpected places. Our regional landfill happens to be one of them.

Our January Girl Geek Dinner took place at Communitech, and we welcomed Cari Rastas Howard, veteran project manager in the Waste Management Division at Region of Waterloo. The full recap is here. It’s pretty packed with info, but some scintillating stuff.

Kudos to Cari for tweaking our brains right from the get-go, by noting that “garbage” as we know it, is actually a pretty new thing. How’s that possible? Gazillion-year-old garbage is archaeologists’ stock in trade, right? Ahh, but. The midden heap got the broken pottery, bones, and whatnot. Organic waste was fed to livestock. There was no plastic, paper went into the privy or elsewhere, and everyone reused materials like glass and metal. Yard waste? Maybe you burned the occasional stump or brush pile, if it couldn’t be burned in the stove in the winter. No one needed to set boxes and bags out by the street once a week... assuming they even lived on a street.

However, we’ve gotten more urban. We’ve gotten more consumerist. Most of us in the city don’t have pigs and aren’t allowed to burn things in the backyard (much to my country-raised regret). And so the government has stepped in to help out. Did you know that waste management isn’t federally regulated? Policy is set provincially, but municipalities are responsible for their own residential collection rules. Where there is no provincial mandate, municipalities determine their own policy. For example, blue box collection is provincially mandated, but green bin collection is not, so municipalities arrange those programs. More on how our region manages that in the full recap.

Initially, municipal waste management “strategies” were pretty primitive. We picked a spot and dumped garbage there. No sorting, no recycling, no environmental controls. Dumps still exist in some rural areas, and many of us remember going to see the bears rummaging at the dump in cottage country for entertainment when we were kids. (This was not actually a good idea, for the bears or anyone else.)

A landfill is different from a dump in that not everything goes into it, there are a lot of environmental controls, and it’s a lot more expensive to build and maintain. Landfills are designed to be air- and watertight. We separate out recyclable and compostable materials. We collect any leachate (“garbage juice”) and process it with other wastewater. We collect methane, clean it and use it make electricity, enough to currently power about 1,400 homes locally. We have 200 on-site monitoring wells to ensure the groundwater stays fresh and clean.

Our current landfill has an estimated 15 to 20 years of lifespan left. However, they’ve been saying that for at least 10 years, so efforts at waste diversion do make a big difference (keep sorting that recycling!) Fortunately, technologies continue to evolve and improve, enabling more efficient and cost-effective reclamation of useful materials, and cleaner processing of waste. And not only do many of these processing technologies significantly reduce the volume of waste that ends up in landfills, it produces significant amounts of usable energy.

Cari outlined several landfill reduction and alternative options that are being employed already in other places, and which have been considered for Waterloo Region. It takes at least 10 years to get approvals and start building a new solution. No new landfill sites have been approved in the province for at least a decade, so we’re looking a lot more at higher-tech processing facilities.

Landfill mining is being done in some places with urgent needs to reclaim space, but where there are also potentially significant amounts of usable materials. Remember, before recycling programs, we just sent everything to one place. Also, there are special cases, like Barrie, where there was a major post-tornado cleanup in 1985, and thus whole strata of potentially reclaimable materials. Some of the dirt layers used in landfill are also removed during mining, which contributes to the airspace reclaimed.

Another option is mechanical biological separation, wherein garbage is mechanically and hand-sorted to remove recyclable materials. The remainder is then composted/digested, which takes care of any remaining organic materials. What’s left after that is unusable garbage and ends up in the landfill. This reduces current volumes by about 60 percent, as well as reducing potential pollution, producing usable energy and reclaiming more usable materials.

There’s also thermal treatment, which can consist of a variety of extreme heat processes. Waste is broken down to base elements, leaving ash. Metals can be recovered from the ash, and a lot of usable energy is produced. Even the ash can be used as aggregate in construction or for road bases. The air resulting from these processes is thoroughly scrubbed to prevent pollution – such things are highly regulated provincially. This reduces the amount of waste ending up in landfill to about seven percent of current volumes and avoids considerable potential pollution. As noted, it also produces a lot of usable energy, enables more recyclables reclamation, and even the waste can potentially be used.

The region hasn’t made any final decisions on what our waste management future holds, but thermal treatment is a strong frontrunner. The Durham York Energy Centre is due to begin operations this fall, and another private facility, Algonquin Energy from Waste, currently processes commercial waste via thermal treatment. Provincial regulations on things like air quality from such facilities is tightly regulated. The Waste Management Division for the Region also regularly holds public consultations. Local residents are welcome to make their voices heard. We also highly recommend the landfill and recycling centre tours, which are held a few times a year.

To keep abreast of goings-on or to get in touch with Region of Waterloo Waste Management, like them on Facebook, find them on Twitter, email at waste@regionofwaterloo.ca, or call at 519-883-5100.

Melanie Baker has a Mennonite background, a career in tech, and enjoys the unlikely ways these things complement each other. She enjoys writing, working with geeks, building communities, baking and creating fanciful beasts out of socks.
Tell a story and build a community: Indiegogo’s Ayah Norris on crowdfunding
News home
A pinkie-sized solution to a global threat