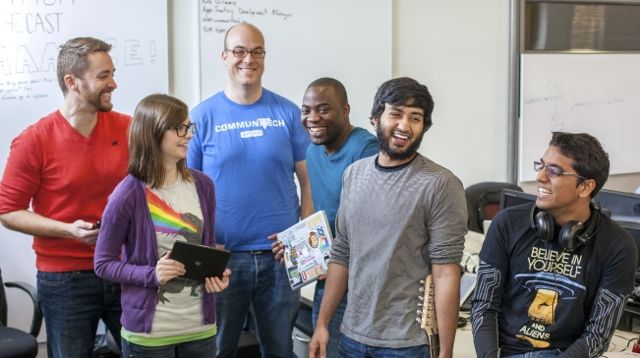 Fortunately, we’re not talking the horrible kind of mandated team building where you’re made to wear Hawaiian shirts and go mini golfing. This is the kind that involves doing lots of hiring and getting talented young strangers to produce great things in a short amount of time.

Our November Girl Geek Dinner took place at Communitech, which kindly both sponsored the dinner and happens to be Rob’s employer. Big thanks to them both. A full recap of Rob’s presentation is here.

In his role as Apps Factory Development Manager, Rob hires a lot of co-ops, and since co-op terms are short, he hires often. For a number of reasons he also tends to hire fairly early stage co-ops, so they don’t necessarily have a lot of work or team experience yet. At the same time, they’re also less likely to have bad habits or preconceived notions.

Rob has the job of whipping them into a lean, mean, app-developing machine, while at the same time building good employees and team members.

One lesson learned early is to make the interview about the prospective co-ops – what’s in it for them, rather than why you think your company/jobs/projects are awesome. Experienced co-ops may well have already worked at places like Google or Facebook, so they’ll be fairly hard to impress, and less-experienced co-ops have to go on what their friends report or what sounds like it doesn’t suck.

Rob referred to his role as “grout”, but he also provides structure around the team, as well as a path to escalation if things go sideways. The goal is for that structure to be flexibly and minimally deployed. The team shouldn’t have to come to Rob with the same issue repeatedly, because he wants them to take charge of sorting it out the first time so they learn.

In addition to Rob as manager, Apps Factory has another senior developer, and while they do rank above the rest of the team, it’s important for them to still be part of it. You have to be the boss, not a buddy, but at the same time the co-ops need to know you can screw up, too, or don’t always have the answers, or can just be someone who’s easy to talk to.

At several points Rob referenced the importance of getting out of the way. Initially this is important when the team is getting set up and getting to know each other. It continues throughout the term, as co-ops own everything in their projects from client interviews through deployment. It forces them to directly tackle solving problems, learning skills, and making mistakes.

There’s no better way of learning than by doing it yourself, and no greater feeling of satisfaction than figuring out how to successfully do something you’ve never done (especially when it’s been driving you nuts). As the team’s mandate is to ship early and often, they get plenty of opportunity to practise.

Rob commented that he always knows when a team has gelled because they start asking each other questions or for help. They use Campfire more as well, at least for casual conversation and getting discussions started. (Developers are often more comfortable with text-based communication, at least initially.) Often these conversations — professional and casual alike — spill over into verbal ones, and can then include the rest of the team.

Early stage co-ops haven’t necessarily developed a lot of specific expertise yet. For most of the team, that’s fine, but Rob has determined that some requirements need specific skills, so he intentionally hires someone with a user experience (UX) specialty in each cohort. This is particularly important, not just for designing pretty apps for clients, but for determining what clients really want for their apps in the first place. Hiring the right people is an important investment.

In terms of what Rob looks for in co-ops, “curious” was mentioned more than once – curious intellects as well as personality quirks. Rob’s found that those who use the same ol’ resume templates and take all the same classes aren’t a great fit. On the other end of the spectrum, neither are those who self-identify as rock stars/ninjas/gurus or the like. You don’t have much motivation or energy left to grow as part of a great team if you’re focused on your own ego or self-promotion.

However, those who you can get talking about their personal projects, things that interest them and get them passionate, those are the ones you can get to know quickly. Geeking out, as it were, gets nerves and awkwardness out of the way in interviews and shows you with whom you’ll really be working.

Ideally, co-op students will graduate with a lot of varied experience behind them – different industries and company sizes, different types of work, projects and clients. Some companies may consider co-ops little more than temps and assign horribly boring work. (That information gets around, though.) But fortunately, there are also guys like Rob who take their roles in helping craft the next great and curious generation of developers and innovators more seriously, and value them accordingly.