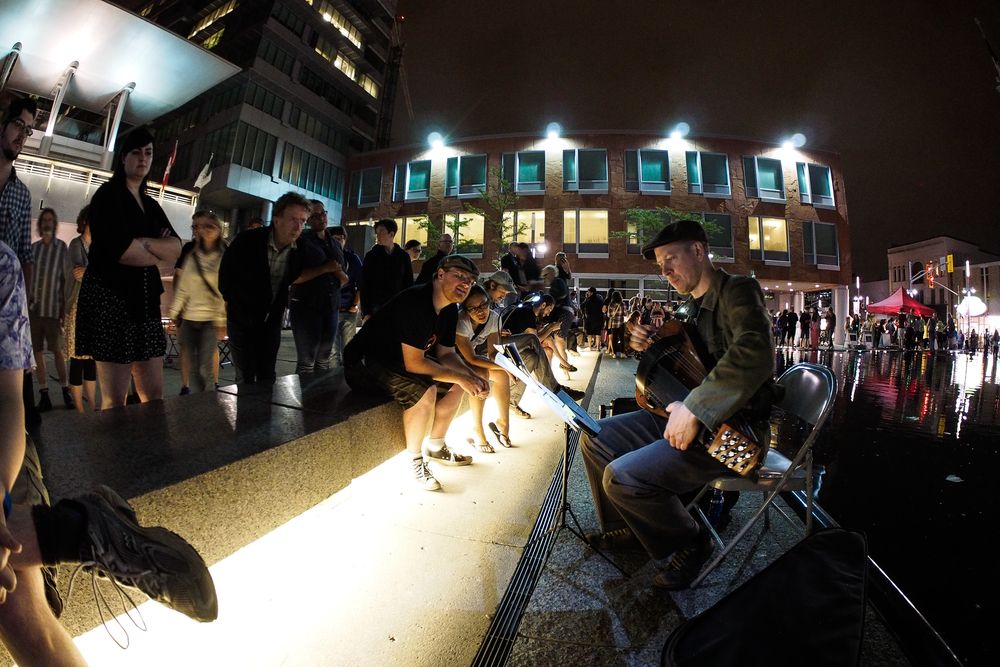 While virtual events have helped get us through the pandemic, there’s still nothing quite like experiencing something new with people in the real world. Thankfully, the dream of returning to in-person events and festivals is becoming a reality as summer approaches.

At a press conference on April 3 at THEMUSEUM in downtown Kitchener, Mayor Berry Vrbanovic announced the dates for returning summertime favourites like the K-W Multicultural Festival, the Kitchener Blues Festival, the city’s Canada Day celebration and more.

Independent event and festival organizers are also planning to return to in-person events, including the Open Ears Festival of Music, on June 2-5. The festival, founded in 1998, stages unique concert experiences that challenge our conceptions of what music is and what it can be.

Richard Burrows, the festival’s Artistic Director, said that bringing the festival back to audiences has had its share of problems. Many artists have struggled to continue creating their art due to economic challenges during the pandemic. Creating and performing has meant going digital, but Burrows said it impacted how artists work.

“What we learned was that if we all move to digital space, it just becomes saturated and nobody wants to really take in all the art that’s available. We struggled to get people to come to live things in the first place and then we struggled to have people look at our work in a digital space that’s completely saturated by everyone. It has really tested our perseverance,” Burrows said.

The sheer volume of digital content available on streaming platforms might have been a great thing for many of us – especially those who had to work at home with young children. But that same volume of content also hurts independent artists looking to attract new audiences.

“There’s so much to watch that has a million-dollar budget. Why wouldn’t I go and sit and watch Netflix? How am I going to compare that to a 10-minute new music experience or avant garde digital artwork?” Burrows said.

Burrows is excited to get back to doing what the festival is good at: showcasing new musical experiences to new audiences. In addition to being an opportunity to attract new audiences, Burrows said festival organizers are also focused on improving equity and diversity within their programming and this year’s festival features all women composers.

“We are making a meaningful attempt to create a festival that allows for diverse voices to be heard and for composers who are brilliant to be featured,” Burrows added.

Burrows and Open Ears are also trying to add new voices to the conversation through a partnership with local hardware startup Monogram for the Emerging Digital Sound Art competition. Open to Canadian citizens and residents under 30, the competition is designed to highlight the work of Canadian artists who create art for the digital world.

“We came up with this idea of digital sound art to act as a catalyst to challenge emerging artists to create something that isn’t just another live stream video. We’re looking for creativity in the digital realm. We’re looking for ways to inspire somebody to watch the video experience differently than they would if it was a live stream,” Burrows said.

Burrows said he reached out to Monogram to pitch the idea since Monogram's tools are used by video and audio creators.

“There was just so much serendipity to the conversation. They were getting ready to expand their marketing across Canada. They’re a homegrown startup from Kitchener. There is a pride to it,” Burrows said.

Founded in 2013 under the name Palette, Monogram’s first product and branding focused on photo editing and the photography market. Since rebranding in 2019 and launching new hardware, its products are now used by photographers, video editors, musicians and producers.

Kevin Meikle, Marketing Manager at Monogram, said the competition is an excellent opportunity for the company to build awareness in Waterloo Region and across Canada.

“It’s a perfect partnership. We haven’t even done much of our own marketing for the audio community, it’s mostly been from influencers. When Rich reached out, I said it completely makes sense. Open Ears is local and it’s great to give support back to our community,” Meikle said.

Burrows said he is excited to work with Monogram to provide students and emerging artists with a chance to share their work with new audiences through the competition. He added that it’s an example of tech for good in action and something that shows the potential for tech companies and arts organizations to work well together.

“It’s very easy for artists to have their hand out and ask for money, because that’s what we are expected to do. That’s the process of writing a grant – we go to the government and we ask for support and they say yes or no. This competition is a chance to build a relationship instead of something that’s transactional,” Burrows said.

Open Ears and Monogram share a mission to support creators, one through experiences and the other through providing innovative tools.

“They come from a desire to create a product that wasn’t on the market to help creators be more fluid in their workflow. That’s exactly what this competition is about and that’s exactly what Open Ears believes in – creating a platform for artists to be able to be more successful. This partnership speaks to the meaningful relationships that can happen between tech companies and an arts organization.”

Alex Kinsella is a content marketer and writer in Waterloo Region, Ont. He's behind TL;WR, the region’s events newsletter, and has worked with some of Canada's best-known tech companies in a multitude of roles. His work has appeared in BetaKit, Grand Magazine, Community Edition and other publications.
Cosm Medical raises US$3.8M seed round to advance pelvic-floor technology
News home
Wavy raises $2.5M to be the platform where culture happens as workplaces evolve beyond the office