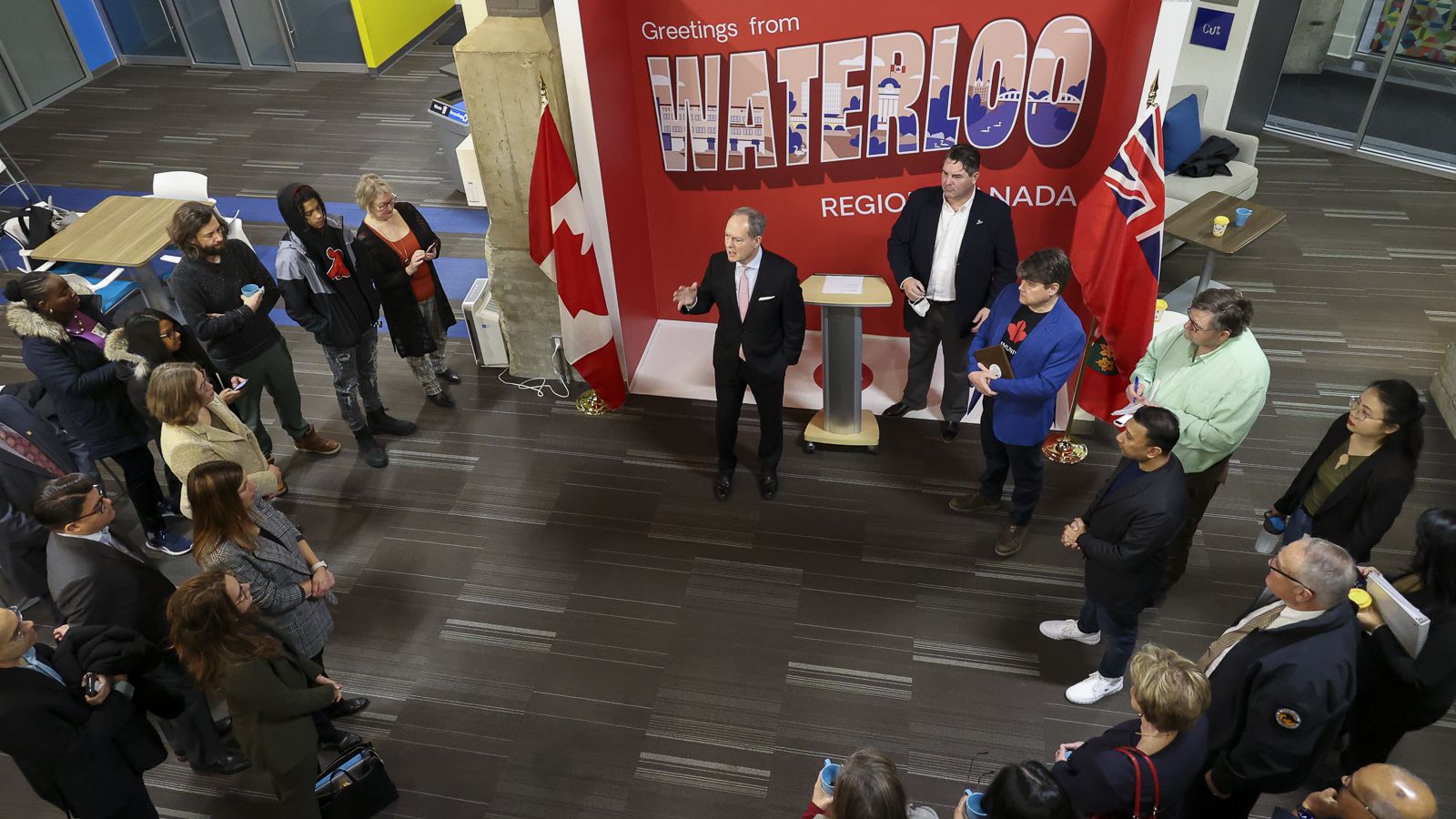 Canada is experiencing a “nation-building moment” as government and the private sector work together to manage the many changes and opportunities confronting Canadians, said Ontario Finance Minister Peter Bethlenfalvy.

“None of this happens at one level of government,” he told an audience at the Communitech Hub in Kitchener during a pre-budget consultation visit to Waterloo Region. “The key is that it happens when we work together.”

The finance minister arrived in the region just one day after the Ontario government made headlines for expanding the number and range of medical procedures that can be performed in privately run clinics. The move is intended to reduce wait times and surgical backlogs, which have been made worse by the prolonged COVID-19 pandemic.

Speaking about the role of innovation in addressing health-care challenges, Bethlenfalvy said the remedies involve more than funding, and should be considered in a broader context.

Health-care innovation was on the minds of the business and community leaders who came to hear the finance minister speak at Communitech.

Aided by a $5-million planning grant from the Ontario government, the communities of Kitchener and Waterloo have been working together to plan the future of local hospital-based health services.

The two K-W hospitals – Grand River and St. Mary’s – submitted a joint proposal last June that calls for a new state-of-the-art hospital and the repurposing of the existing Grand River Hospital building in Kitchener as an ambulatory and urgent care centre. The plan also recommends an expansion of Grand River’s Freeport Campus in south Kitchener, which provides rehabilitation care.

Health-care innovation is also at the heart of another important project with a strong local connection. Communitech has been working with the Coordinated Accessible National Health Network (CAN Health) to overcome procurement challenges and help Canadian hospitals take greater advantage of Canadian-made innovations. The effort – an integrated-markets strategy that brings hospital officials and tech leaders together to find solutions to common health-care challenges – has been aided by a $30-million investment by the federal government. It is also supported by provincial legislation such as the Building Ontario Businesses Initiative (BOBI), and by Crown agencies such as Supply Ontario, which aims to modernize public procurement.

Chris Albinson, CEO and President of Communitech, provided examples of the integrated-markets approach in action. One case study involves a commercialization project in which Grand River Hospital has begun deploying a transformative imaging technology created by KA Imaging, a University of Waterloo spinoff company.

“We have awesome tech,” Albinson added. “We can bring it together and deploy it to do health care in a way that is more efficient, costs less money and has better outcomes. If you want a sandbox to prove that’s true, it’s right here.”

On other fronts, Ian McLean, President and CEO of the Greater Kitchener-Waterloo Chamber of Commerce, thanked Bethlenfalvy for the province’s commitment to two-way, all-day GO rail service between Kitchener and Toronto.

“We have come through a challenging three years,” McLean added. “But the region is ready to work with you on innovation across all sectors to drive economic growth, more jobs and a better tomorrow for the province.”

Tony La Mantia, President and CEO of the Waterloo Region Economic Development Corporation, thanked the finance minister for the province’s role in fostering an electric-vehicle battery industry in Ontario.

Bethlenfalvy replied that the Ontario government is committed to supporting the province’s automotive sector – one of the largest in North America – and is particularly keen on the province becoming the No. 1 region for EV battery manufacturing in North America.

In a nod to key industries in both Waterloo Region and the province, the minister said the Ontario government is focused on investing in three core areas: advanced manufacturing, life sciences and technology.

“Our message here today is we’re getting things done and we have an ambitious plan to rebuild this province, to create really good jobs and better paycheques,” he said.

Kevin Crowley is a Staff Writer for Communitech News. He is a Michener-Award-winning former newspaper journalist with the Waterloo Region Record, and former Director of Communications and Public Affairs at Wilfrid Laurier University in Waterloo, Ont.
‘Seize the moment’
News home
Game time