Google for Entrepreneurs Cohort 2 set to launch in Communitech Hub 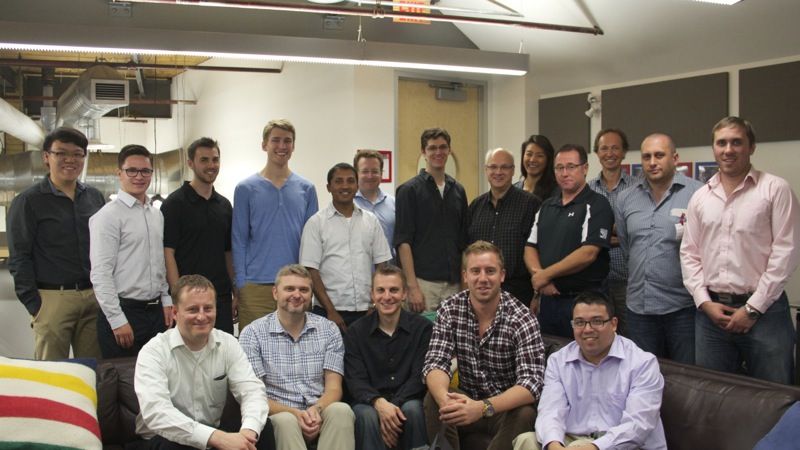 Photo: The second cohort of the GFE startups-in-residence program, hosted by Communitech, at the Google offices in Kitchener.

It’s not every day you get to pitch to Google.

For five startups, the dream of doing just that became a reality Thursday when they pitched at the Google offices in Kitchener as part of the Google for Entrepreneurs (GFE) Ignition Day . Aterlo Networks, Clipter, Fundmetric, SkyWatch and Teknically make up the second cohort of the GFE startups-in-residence program hosted by Communitech.

The program gives startups opportunities they wouldn’t normally get, including six months’ residency in the Google Innovation Space at the Communitech Hub, plus mentorship and guidance from Google.

“We’re getting a lot of involvement from Google here in Kitchener and also Google in Toronto from their marketing and PR department, which I think adds a lot of value to our startups,” said Marylin Ma, Google for Entrepreneurs Program Manager at Communitech. “And likewise, enterprises like Google are keen on learning what the latest innovations are. It’s a mutually beneficial arrangement.”

The second run of the program attracted startups near and far.

Clipter, which has created a collaborative video app, is currently in the home stretch of its residency in the Communitech HYPERDRIVE accelerator. CEO and co-founder Brett Madill said the startup applied to GFE for a few reasons.

“It provided a great opportunity for us to continue to work from within the hub of the Kitchener-Waterloo tech scene, Communitech,” Madill said. “It also allowed us to gain access to Google marketing mentorship office hours, as well as access to Android mentorship as we look to expand our platform to those devices.”

SkyWatch, from Toronto, taps into the world’s space telescopes, ground observatories and astronomical databases to create the world’s first real-time feed of happenings in space.

“We think that we’re building our product much in the same way Google built its own search engine. We’re trying to index space essentially, like Google indexed the Internet,” said James Slifierz, co-founder of SkyWatch. “We have a lot of network and infrastructure challenges that we’d really love input from and guidance on.”

The startup is aiming to launch its finished product at the 2015 NASA International Space Apps Challenge next April.

“This program will definitely help us get there,” Slifierz said.

The farthest company came all the way from Canada’s east coast: Nova Scotia.

“It was one of those things; you’re either going to take the risk as an entrepreneur, or you’re not. And we decided it was a risk worth taking,” said Mark Hobbs, co-founder of Fundmetric, about the decision to move from Halifax to Waterloo Region when accepted to the GFE program.

The company helps charities raise funds more effectively by using predictive algorithms and big data to better understand who their donors are. Hobbs explained that Google has “unprecedented expertise” in algorithms, which attracted the company from a technical standpoint.

The second reason was the opportunity to live in Waterloo Region. Within a matter of days of their final call for an interview, they had decided to make the move.

“We had great support in Halifax, but any time you get the opportunity to come to Waterloo Region, get the guidance, get the introductions to fundraisers and people who are using our product saying ‘lets try this out’,” Hobbs said, “that type of collaboration I think is unique to the region.”