Flexibility is key as grown-up startups seek space to scale 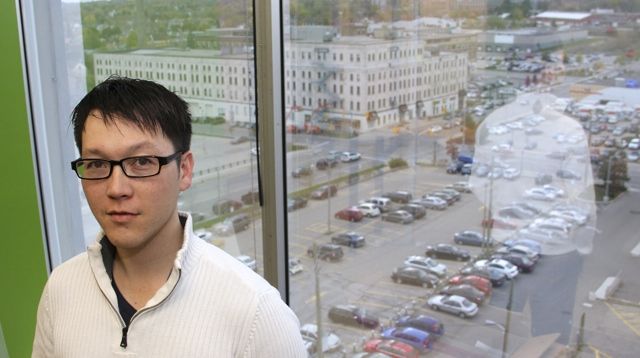 Photo: TribeHR CEO Joseph Fung stands in his office at 305 King St. W. in Kitchener, which overlooks the Tannery.

What’s next for startup entrepreneurs who can’t undertake big space commitments as they come out of the various programs in Waterloo Region’s tech ecosystem?

A block away from the Communitech Hub, where more than 100 startups are working to gain traction, stands the former Canada Trust building, towering over King Street in downtown Kitchener. It has quickly become a next destination for young companies graduating from Hub-based programs.

Aside from the great views and proximity to the Hub, several other features have drawn these companies to the building that once housed Desire2Learn before it ran out of space and moved into the Tannery, upstairs from the Hub.

“The key concerns were the space we needed for the staff, and the length of the lease,” says Andrew Matlock, chief executive officer and creative director of Industry Corp., a creative technology and entertainment company. “We found that most leases were three years or more and it just was not a good move for us to sign into that, as a startup that’s constantly growing.”

The ability to take on more space is a key factor for startups looking to grow quickly, and 305 King has been able to fulfill that need for its startup tenants.

“The space has some good flexibility, so there is a good variety of units, and that lets you grow as your company grows in terms of taking additional space and expanding,” says Joseph Fung, CEO of TribeHR, which was recently acquired by California-based NetSuite.

Fung highlighted another startup must-have – fast internet – which the building provides through a fibre connection. The building is also close to restaurants, a growing number of condos and transit.

“We started by providing parking to our employees, but we’re encouraging people to live closer to the office and support alternate modes of transportation,” says Fung, adding that a transit credit has replaced parking passes for his 15 local employees. “You’re going to see more alternative benefits like that for companies in downtown Kitchener.”

Like many kids who move out of their parents’ house, startups don’t usually stray far from home, and often come do laundry and have a proper meal on weekends. The proximity of 305 King to the Communitech Hub, as well as other downtown-based companies like Vidyard and Thalmic Labs, helps tenants to maintain close ties to the startup community.

“I like going to see other startups and recruiting,” says Mike Rossi, CEO of Sweet Tooth, which creates customer loyalty software. “There’s a lot of smart people working in the Hub as well, so I usually go over there every one or two weeks and hang out.”

Flexible leasing arrangements are also attracting startups to locations away from the core.

On the corner of Westmount Road and Ottawa Street in Kitchener, above a retail strip plaza, Voisin Tech Suites is the new home of BigRoad, I Think Security and Qwalify, all recent graduates from Waterloo’s Accelerator Centre.

For three years, the plaza’s second-storey office space sat empty. Jeff MacIntyre, a local entrepreneur, saw this as an opportunity to create shared office space and fill a need for one of his associates, a distributor for Groupe Lacasse and Mohawk Flooring, which wanted to display their office products.

In just six months, the space was transformed into a functional showroom for more than nine lines of furniture and eight lines of carpet, as well as functional office space with common areas, boardrooms and fibre internet – everything a new company would need.

“When we were attracting businesses, we didn’t know who it was going to be, but we did find that there was a void in the tech market, at the time when they may be coming out of the Accelerator Centre or coming out of Communitech,” says MacIntyre.

Similar to the 305 King West building, the space and leases are flexible, with room for company growth.

“I like to refer to this as their first apartment almost,” says MacIntyre. ”I’ve got a short-term lease with them (a year), which doesn’t show major obligation. They have no personal guarantees and they don’t have to sign five-year leases here.”

BigRoad, a smartphone- and web-based tracking solution for the transportation industry, has benefited from this flexibility, said Terry Frey, the company’s chief operating officer.

“We’re really happy that we didn’t have to go spend a lot of cash on design, furniture and paint, pick all of that and then sign a long-term lease,” Frey said. “The short-term pay-as-you-go all-inclusive lease worked out really well for us.”

Similarly flexible terms are planned for the International Business Centre, a new building slated for the David Johnston Research + Technology Park in Waterloo, just up the road from the Accelerator Centre. The 110,000-square-foot facility, to open in 2015, will be geared specifically to Accelerator Program graduates.

Back in the core, the City of Kitchener is looking for a way to address the need for affordable office space to allow startups to remain downtown. The city is working on a Landing Pad grant program that, if approved, would give landlords and tenants financial incentives to make leasehold improvements to the upper levels of downtown buildings.

“I believe that downtown Kitchener is the right place to be growing our company,” says Fung. “There isn’t anywhere else in the region that I’d want to be based right now, and so this is where we will continue to grow, and I think you’ll see more companies gravitate there.”