Finding answers to the Waterloo ‘why?’ 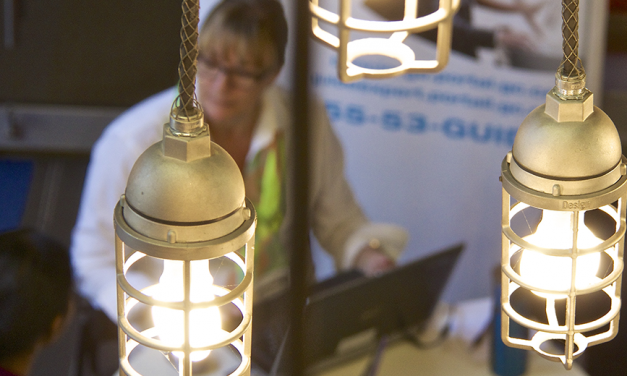 We’ve all heard the question: Why Waterloo Region?

We hear it from our big-city neighbours an hour to the east, whose sky-high vantage point often obscures what’s happening on the ground directly beneath them.

We hear it from Silicon Valley, whose bloggers take pity on us for being “stuck in Waterloo,” as though we would all come and join them if we only could.

Not so long ago, we even heard it from ourselves, but mostly we hear it from people who have not yet bothered to come here and see for themselves.

When they do, it rarely takes them long to find the answers. They are everywhere.

They’re here in the Communitech Hub in downtown Kitchener, where tech stalwarts, students and some of the hottest startups you’ve never heard of – at least not yet – are redefining innovative entrepreneurialism in the coolest workspace in Canada.

We’re not hard to find; just look for the sprawling, 19th-century yellow-brick factory with Lang Tanning Company painted on the front, and signs for Communitech, Desire2Learn and Google along the top.

This newly revived building, once the largest supplier of saddle leather in the British Empire, is one of the more obvious incarnations of Waterloo Region’s 200-year history of world-beating industriousness and economic resiliency, but other signs abound.

If you take a 10-minute drive (or a 20-minute bike ride) north into Waterloo, past Perimeter Institute for Theoretical Physics (Stephen Hawking’s Canadian base) and the Centre for International Governance Innovation, you’ll find the place where the most recent chapters of this impressive history were conceived: the University of Waterloo. If you get lost, Bill Gates can provide directions; he’s been here twice since 2005 to tout UW’s enduring value as a key talent provider to Microsoft.

UW opened in 1957, after local industrialists identified a need for engineers to help take 150 years of local manufacturing know-how to the next level, as demanded by an increasingly sophisticated economy.

Unique from the beginning, the university felt that individuals, not the institution, should be free to commercialize their intellectual property. It also knew books can only take learning so far, so it pioneered the concept of cooperative education, and gave students some earning power in the process.

These Waterloo innovations were the spade that broke new economic ground on land already notable for its farms and factories, which had turned out everything from Seagram’s spirits and Schneider’s meats to Uniroyal tires and Electrohome TV sets.

That new ground spawned what is now a teeming tech ecosystem of 800-plus companies that employ more than 30,000 people, and are looking to lure 2,000 more to a sector that generates more than $20 billion in annual revenue. Lately we’ve been growing at a rate of one company per day, and in the past year alone, firms have spent more than $500 million acquiring Waterloo Region companies.

More impressive than the ecosystem’s size are its diversity and dynamism, and the strength they sustain. Yes, we are home to Canada’s largest tech company (Research In Motion), its largest software company (OpenText Corporation), its largest satellite company (COM DEV) and the world’s leading projection technology company (Christie Digital Systems Canada Inc.). But we also host 400 firms in digital media and ICT, more than 100 in software, 80 in mobile technology, 64 internet software firms, 24 clean tech ventures and 48 companies in the life and health sciences sector.

And that’s to say nothing of this region’s continued strength in manufacturing, insurance and higher education.

The thread that connects all these elements is also the toughest thing to explain to those who haven’t yet come here to see it for themselves: the culture of curiosity, collaboration and compassion that has informed the Waterloo soil since its earliest days as a Mennonite farming community.

In a special report a few years ago, my former Globe and Mail colleagues coined the term “the Waterloo Way” to describe how business, governments and educational institutions here cooperate in a spirit of “get-on-with-it fortitude”, rather than allow cultural, social or political barriers to divide them.

The result is a diversified, ever-evolving economy that has successfully endured cycle after cycle of upswing and downturn, only to emerge stronger each time.

So, when I decided to leave the Globe after eight years in Toronto and join Communitech as its staff writer, I too heard the question, why Waterloo?

My answer typically involved family (I am a fifth-generation Waterloo Region native), quality of life (there is much to be said for affordable homes and 10-minute bicycle commutes), and of course, the job itself: telling our tech story to the world, one feature at a time.

It’s only now that I realize I could have boiled my answer down to a two-word phrase favoured by Canada’s 28th Governor General, David Johnston, when he was UW’s president:

Anthony Reinhart is Communitech’s Editorial Director and a former newspaper journalist. He held staff writing positions at the Guelph Tribune, Waterloo Region Record and the Globe and Mail before leaving the Globe to join Communitech in 2011.
Technology will fuel pandemic recovery: Prospect CEO
News home
View from the 'Loo: CityAge conference to focus on supercluster