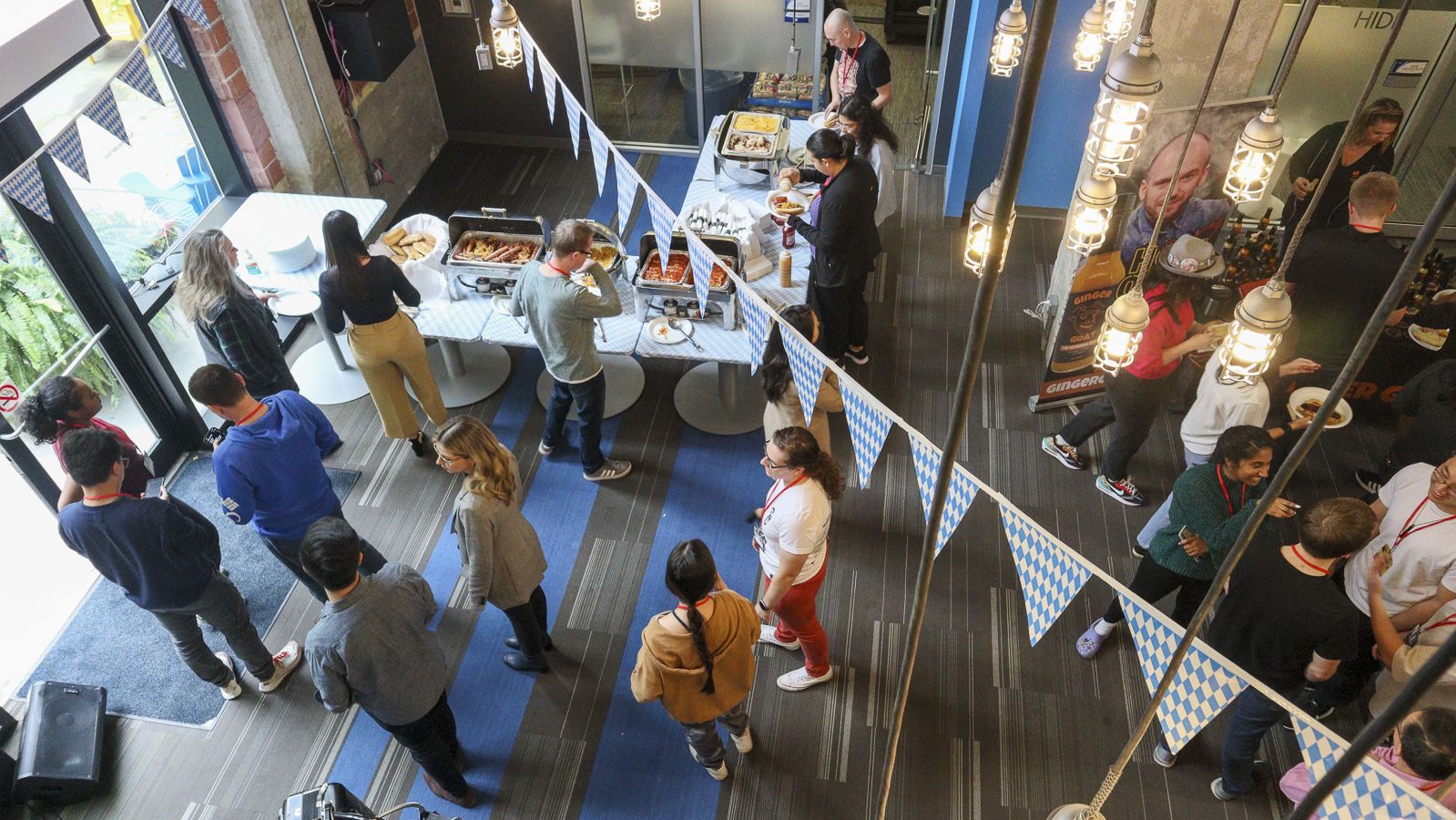 There was plenty of sausage, beer and Gemütlichkeit as the Communitech Hub in Kitchener was transformed into Founderhaus to celebrate the community of tech and the newest members of Team True North.

As well, more than 45 investors attended a pitch session with founders and then took the opportunity afterward to go deeper with one-on-one meetings.

“Regardless of the (economic) environment, I always want to see amazing founders and hear about the exciting solutions they’re working on,” said Katie Salem, Executive Director of York Angel Investors. “Sometimes the best ideas come out of difficult times.”

Dozens of tech leaders stayed after the open house to meet in peer-to-peer groups and connect informally with fellow founders and investors.

The highlight of the afternoon was the introduction of the newest members of Team True North, a data-driven initiative to identify and support high-potential Canadian private tech companies that are on track to achieve global scale.

“We’re thrilled to have identified 26 more world-class tech firms in Canada’s innovation economy to add to our 2022 Team True North roster,” said Chris Albinson, President and CEO of Communitech. “Our tech ecosystem’s ability to weather current economic challenges is due to their impressive growth and an unwavering commitment to Tech For Good, which is a distinct global advantage for Canada.”

The 26 new members (see list below) join 35 other companies already on Team True North. The program, which was launched this past June, is modelled on Canada’s Own the Podium Olympics strategy. Team True North aims to help at least 14 high-growth Canadian tech companies achieve $1 billion in annual revenue by 2030.

“Canada is just a great place to build a company and we’re super proud to be a part of Team True North,” said Mike McDerment, co-founder and CEO of Freshbooks. “We are building – you are all building – an industry. It’s early days and it’s going to be huge and it’s just incredible.”

“The talent, trust, and technological innovation exemplified by True North companies is a significant competitive advantage,” said Kurtis McBride, founder and CEO of Team True North company Miovision. “Not only can we build a new generation of globally-focused firms here in Canada, with thoughtful federal and provincial regulation and procurement, we can harness the capabilities of True North companies to help Canada solve many of its pressing public policy challenges.”

Some impressive stats about the full roster of 61 Team True North members:

“Just like Own the Podium, this is team Canada – we’re all cheering for them,” said Albinson. “We are the second-largest innovation hub in the world and the fastest growing by 350 per cent. The brass ring is literally in front of us. It’s on us to grab it. I know we’re going to do it.”

The new additions to Team True North 2022 include:

The Team True North roster will be updated annually.

Kevin Crowley is a Staff Writer for Communitech News. He is a Michener-Award-winning former newspaper journalist with the Waterloo Region Record, and former Director of Communications and Public Affairs at Wilfrid Laurier University in Waterloo, Ont.
M-Theory: What to do when no one cares
News home
In pictures: Techtoberfest 2022