Funding is part of $90M investment through federal ElevateIP strategy 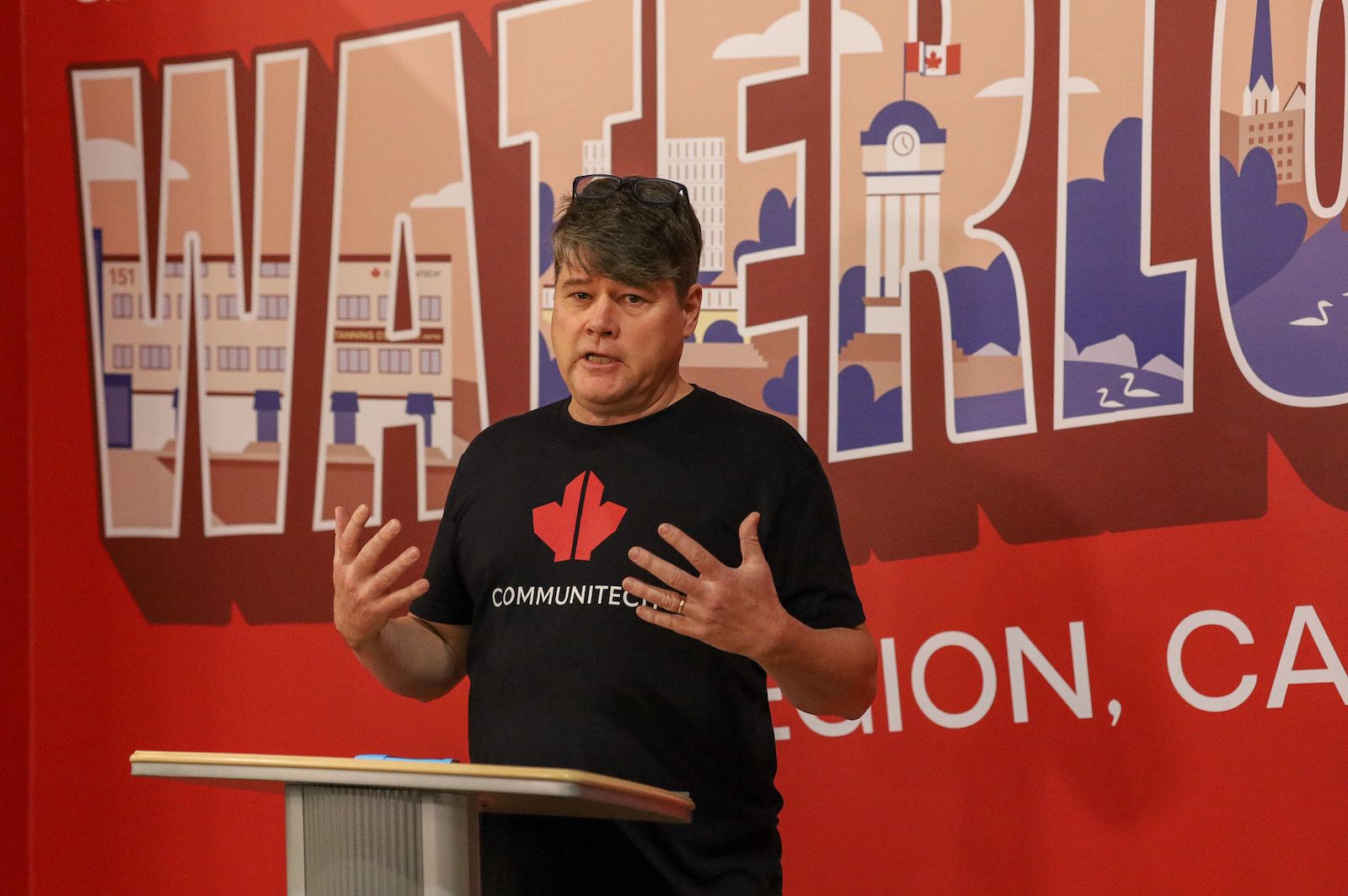 Communitech CEO and President Chris Albinson talks about the importance of IP at a news conference in the Hub. ( Photo: Alex Kinsella for Communitech. )

The federal government has awarded $38 million to Communitech to help startups strengthen the development, understanding and protection of intellectual property (IP).

The money is part of a $90-million investment over four years that the government is making through its ElevateIP strategy, which is designed to help Canadian companies protect, manage and leverage their IP.

“Canadian startups are some of the most innovative and inventive in the world,” said François-Philippe Champagne, federal Minister of Innovation, Science and Industry. “Through this investment, we are enabling startups to better develop IP strategies for long-term growth. We will continue to do everything we can to see Canadian businesses succeed both at home and around the world.”

“Our federal government is doubling down on Canadian startups to support intellectual property programs to help them grow and succeed,” Albinson said. “We are deeply grateful to Minister Champagne for providing the resources through Elevate IP that are necessary to help founders make the most of their IP assets and retain the benefits of Canadian innovation in Canada.”

Communitech is one of five organizations across Canada that were chosen through a competitive proposal process to help deliver the programming funded by the government’s $90-million IP investment.

The announcement was made today at a number of locations across Canada. At a press conference in the Communitech Hub, the good news was delivered by Waterloo MP Bardish Chagger and Kitchener South-Hespeler MP Valerie Bradford.

“By protecting Canadian innovation, IP sets the table for Canadian competitiveness and economic growth,” Chagger said. “It is no exaggeration that for innovation to flourish, we need to prepare the startups of today with the know-how to understand and use their IP.”

Bradford said that Communitech and the other four delivery partners will be helping startups in three key areas:

“Our ElevateIP partners will be giving startups not only support from top-tier IP professionals to help develop, protect and strategically manage their IP, but also the funding to put those plans into practise,” Bradford said.

She also praised Communitech for its commitment to Canadian tech.

“Communitech has a strong track record of supporting startups, a network of partners and, crucially, a plan to help startups grow and succeed,” she said. “On behalf of the government of Canada, I want to thank Communitech for your continued leadership and assistance to Canadian startups. The work that you are undertaking is critical to our country’s continued economic recovery.”

The $38-million share of the $90-million investment is one of the largest projects ever awarded to Communitech, a founder-centred organization that excels at bringing partners together to advance Canadian tech.

“More than 90 per cent of the value of companies today is in intellectual property,” said Jim Hinton, a lawyer who specializes in IP and advises Communitech on IP-related matters.

“The key thing is global competition,” he added. “Canadian companies need to generate IP, retain that IP, and then commercialize that IP. They make money from that, and that drives economic prosperity for the whole country.”

Like Albinson, Hinton emphasized the need for Canadian founders to better understand the importance of developing strategies to commercialize IP and to protect it from legal attack.

“If a company doesn’t own the foundation of (its) intellectual property, and they don’t get their IP ducks in a row, then it’s only a matter of time before they have to be acquired and they have to sell out,” Hinton said. “And if you don’t have those big 10,000-patent strong companies within a country, then that IP is going to flow out of the country, and then the value of it being commercialized is lost, and we’re going to have to pay to use that technology even though we created it.”

Albinson, who has patents himself and has fended off legal challenges from competitors, said it is critical for Canadian founders to appreciate how fierce the battle for IP ownership is.

“When you’re playing in the big leagues – and Canada is in the big leagues, we’re the second largest innovation hub in the world and the fastest growing – sometimes people come into the boards with their elbows high,” he said. “And when that happens, what we want is to know that our IP is protected.”

Although many of Canada’s peer countries have been investing substantially more in IP education and strategy development, several experts said the ElevateIP funding is a significant start.

“IP is the currency of today,” Hinton said. “If Canadian companies own innovation assets like IP and data, then they are going to do extremely well. We’ve got a long way to go. We’re as far as we’ve ever been when it comes to IP, but this is the beginning of a huge opportunity.”