Coming together to face the future of cities 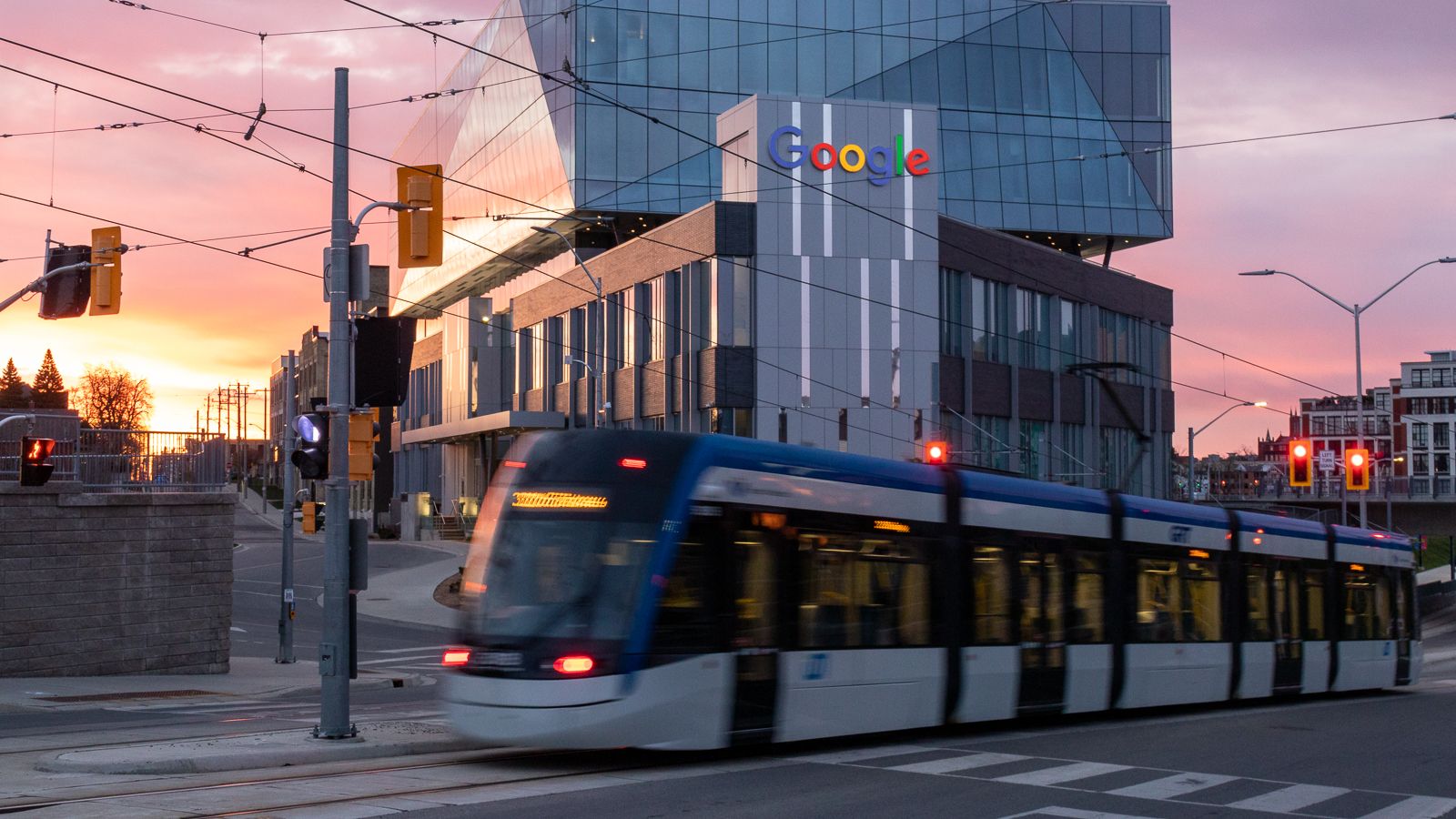 What does our urban future look like? How will society shape cities, and how will cities shape society? And what role can technological innovators have in these changes?

Those are questions being addressed by a year-long commitment by Communitech and its partners — Rogers, the City of Kitchener, and Montreal-based computer software firm Presagis — entitled the Future of Cities 2022 Collaborative, aiming to reimagine the systems and processes that make cities successful.

Earlier today, more than 400 registrants from points as diverse as Vancouver, Knoxville, Winnipeg, Atlanta, Montreal and Toronto gathered virtually for two hours of sharing experiences, ideas and best practices of cities and technological innovators as they work together to solve the big problems of urban living.

University of Waterloo professor and Problem Lab founder Larry Smith laid the groundwork for the session by giving the historical context of the public-private partnership (P3), pointing out that the rise of civilization, and therefore the rise of cities, was thanks to the technology of the plow, that allowed subsistence farmers to become creators of agricultural surpluses. And those surpluses fed the growth of the first cities.

But the technological-political partnership didn’t end with simple surpluses of grain: innovators have always worked with municipal leaders, creating everything from sewers, roads and aqueducts to railroads and public transit — the components of infrastructure that underpin the urban environments that drive economic growth for our societies today. So, society is no stranger to P3s.

But, said Smith, disruption is coming. We don’t have the data we need to extrapolate our urban futures and, “If we have ever needed innovators, we need them now.”

The disruptive forces are varied, said Smith. He noted that Western society is in the middle of “a great baby drought,” where immigration will have to make up the population deficit created by smaller family sizes. But Western nations will be competing with one another for the skilled workers they need, which means there will be wage wars among nations that want to woo talent.

And immigration can add a new level of uncertainty to urban planning: will newcomers want to live in densely populated urban areas, or will they choose to live in big homes in smaller communities? The global pandemic has shown the viability of remote work, and what impact will that have on city-building? The current crisis in Ukraine demonstrates that the flow of immigrants may not be easy to predict or control.

Said the professor, urban governments can often be “notoriously inflexible” but “we need innovation that prizes flexibility.” He urged the registrants to “face the future with caution and humility.”

Key to the success of public-private partnerships, the panelists said, is communication and transparency.

Halifax Mayor Savage said there are a multitude of crises facing cities: climate, health, economy, social justice. What’s key is that technology “allows us to improve our democracy . . . how do we work with staff to embrace technology?” The ultimate goal, he said, “is to improve the lives of the people we serve.”

Dan Mathers advised that municipal leaders should consider “a thoughtful application of technology to their problems,” and suggested that some politicians, mindful of how they spend tax dollars, may be tempted to “solve all problems with one platform,” which can be risky.

Seek solutions, he suggested, that touch multiple objectives: for instance, a solution for downtown parking may have the added benefit of tackling pollution issues, by limiting the amount of time cars spend idling.

Mathers also advocated for municipal leaders to create an “innovation budget” so that solutions can be tested and piloted, without committing to overhauling an entire system.

Alison Carden warned that entrepreneurs can’t just build a solution and take it to the market. It’s important to meet with the principals “and figure out what the real problem is.” Co-creation, she said, is essential, as is considering ways for municipal governments, with limited budgets, to pay for the solutions. She suggested that participants in a P3 need to think about ways that the solutions can be funded, and may need to bring in other partners.

The importance of co-creation was reinforced in a later session by Tess Van Thielen, Vice-President of Advanced Services for Rogers. Connected cities, she said, really start with people, and while there are many opportunities for infrastructure innovation – she noted that leaky pipes with no sensors might lead to average water losses ranging from 10 per cent to 40 per cent – transportation is a key area where Rogers is co-creating solutions with municipal partners. Municipal leaders understand the benefits of moving people from cars to public transit, and how intelligent and adaptive traffic lights can free up roadway space for pedestrians and cyclists, while reducing emissions from idling vehicles.

There is no lack of data to be mined, she noted, but that increase in data creation needs systems, such as 5G, to handle the volume. Rogers has found that mobile data transfer in 2019 grew by 42 per cent, a growth trend that has been accelerated by the COVID pandemic. Rogers is seeing a huge growth in connected devices, with more than 33 million wireless subscribers in 2019, and a forecast 425 million network devices by 2023. All of this hardware will allow for new business models in the economy. “There’s so much that’s going to be built and so much that is going to be developed over the next little while, we are excited. The only way we can do that as an ecosystem is to make sure those advanced technologies and foundational elements are available as ubiquitously as possible.”

That ubiquity has its own challenges, says Ann Cavoukian, the storied former Ontario privacy commissioner who developed the internationally accepted “privacy by design” standard and is now Chief Privacy Officer for the Innovate Cities non-profit collaborative network. Innovate Cities, she said, is committed to using data to improve the quality of life for citizens, while protecting their privacy and earning their trust.

The world of non-stop sensors can be an infringement on privacy, she said, because the automation of data collection means individuals have little opportunity to review their data or grant access to it. She said that in some smart city contexts, even stepping into a coffee shop could result in an infringement of one’s privacy, if the protections are not embedded into the smart city context from the outset.

CityShield, an initiative of Innovate Cities, is one option for data collectors to share what is harvested, essentially creating a trusted third party – a data trust of information that has been de-identified at source and so is no longer personal information, but simply data, that can be used for research or innovation.

This data trust will promote knowledge sharing and drive economic development for cities, she said.

“CityShield offers a clear advantage – it’s a far better future for all of us.”

Mary Scott Nabers, who said that the future of cities is public-private partnerships, advised the audience that government and industry move at different paces. Government officials are “smoother, slower, more thoughtful, because they are using taxpayer dollars,” noting it’s a completely different culture from startups that are used to being agile as necessary.

Emily Yates agreed that business leaders can show frustration with how slowly projects can move: communication and transparency are key to both sides understanding their work cultures. She said she tries to explain every holdup to partners, so there are no frustrations or misunderstandings.

Sasha Einwechter spoke to the matter of streamlining procurement to accelerate P3 projects, noting that in 2016, the City of Guelph launched Guelph Labs to look specifically at procurement, with the intention of going beyond the large vendors to get the involvement of local startups, who might not have the staff to work through the RFP process.

Kimberly Williams noted that procurement can be a “very proscribed process” so many transit agencies are using the unsolicited proposal mechanism. It’s a streamlined way for tech companies to present an opportunity. It doesn’t skip the procurement process, but allows the agencies to do a pilot or demonstration project to test and prove the concept.

Williams spoke to the changing attitudes of citizens to public data collection, citing the example of Houston traffic light cameras, that stirred a negative citizen response. The cameras were deactivated. But after Hurricane Harvey hit in 2017, flooding downtown Houston, there was citizen interest in IoT solutions that could inform them of flood risks. It reopened the conversation about how data collection can be helpful for citizens, and “it presents an opportunity for a more fruitful conversation about data collection.”

Bill Bean is a freelance writer, editor and content producer in Waterloo Region, Ont. He has worked at newspapers including Ottawa Today, the Edmonton Journal and the Waterloo Region Record. He is also a certified Can-Bike cycling instructor.
eSentire selects SentinelOne to advance multi-signal MDR capabilities with AI-powered XDR
News home
Tech Roundup for February 2022