BufferBox and Google: A match made in Waterloo 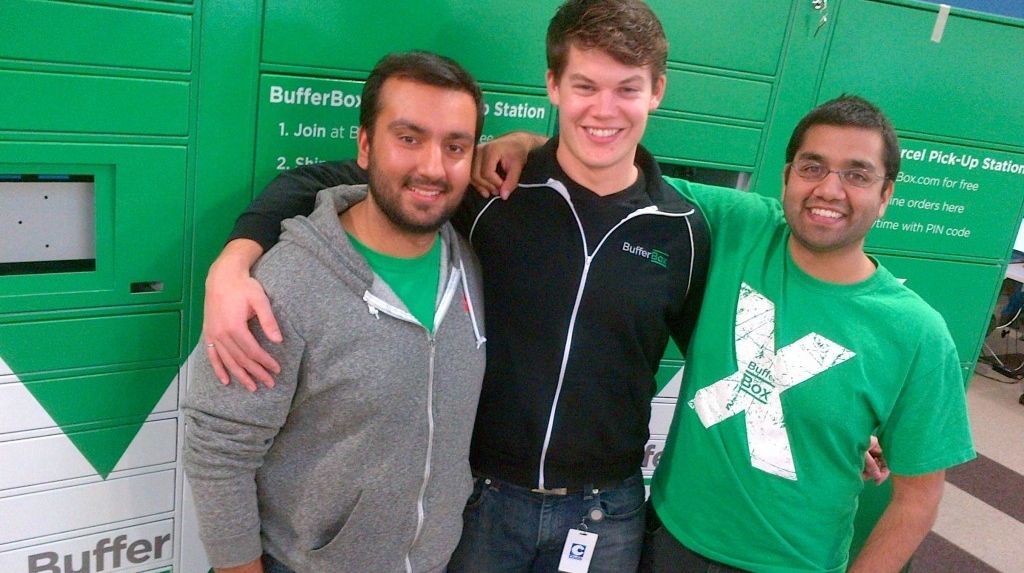 A strong sense of holiday spirit spread through the Communitech Hub Friday with news that BufferBox, a tenant company in the Hub’s UW VeloCity Garage, has been acquired by Google.

The deal had been rumoured for weeks, but only quietly, since the influential San Francisco-based tech blog GigaOM published a piece on the night of the U.S. presidential election, when many readers would have been distracted.

It was confirmed on a snowy afternoon in Kitchener-Waterloo. Financial details of the cash/stock arrangement were not disclosed.

The high-flying hardware startup had been on a roll for the past two years, since co-founders Mike McCauley, Jay Shah and Aditya Bali devised the BufferBox as a fourth-year design project while studying mechatronics engineering at the University of Waterloo.

After they graduated, the founders moved into the Accelerator Centre in UW’s Research and Technology Park to refine and commercialize the concept, and placed their first parcel pickup kiosk in the university’s Student Life Centre.

Last January, they won a $25,000 grant from the venture fund at UW’s VeloCity incubator program, and in February, moved into the VeloCity Garage in the Communitech Hub when it opened.

Minutes after today’s announcement, McCauley described how the company’s placement within the Waterloo Region tech ecosystem paved the way for the deal. He said BufferBox made first contact with Google in April at a Communitech Techworking Breakfast, where Jay Shah spoke, followed by Howard Gwin of OMERS Ventures.

In the audience was Steve Woods, engineering director at Google’s Kitchener-Waterloo headquarters, which is upstairs from the Communitech Hub and VeloCity Garage in the Lang Tannery complex.

“Jay gave a stellar presentation,” McCauley said. “Steve came up to both of us afterwards and basically said, ‘We should chat, here’s my card,’ and then just walked off.”

The BufferBox team pursued the notoriously busy Woods and landed a meeting within a couple of weeks.

“He was just super excited about what we were working on, and a huge supporter of Waterloo startups,” McCauley said, adding that Woods was slightly less enthused that BufferBox was headed to Y Combinator’s accelerator program in California, where he feared they might stay.

As it turned out, Woods had nothing to worry about – McCauley and the team had every intention of returning to Waterloo Region to build the company.

“We came back afterwards because we love the community; we love what’s been put together here, Communitech’s obviously a big part of that, and we really love the ecosystem here,” McCauley said. “There’s no way this would have ever happened had we not been in Waterloo.”

As the founders stood chatting in the VeloCity Garage Friday afternoon, with snowflakes falling outside, Bali explained why the space seemed unusually quiet.

"The reason why this building right now is so empty is because five or six of the companies here are actually down in California for Y Combinator interviews," Bali said. "You can definitely tell the calibre of companies that are being incubated here, and there are some really smart kids coming out of the school."

Iain Klugman, CEO of Communitech, hailed today's announcement as evidence of the strength and dynamism of Waterloo Region's technology ecosystem.

"I think this announcement today is further confirmation of the fact that we're on the right path; that we have what it takes in Canada to build world-leading technology companies," he said. "We're producing research and entrepreneurs who are comparable with anyone in the world, and we ain't seen nothing yet."

Klugman said the BufferBox acquisition is also proof that Communitech's mashup approach to commercialization, in which large multinationals, entrepreneurs, academic partners and university incubators work in close proximity, can be a powerful catalyst.

"The model is different from those elsewhere in the world," he said. "As you press all these players into one location, something magical happens, and again, it's further confirmation of the relevance and the opportunity of a model like this . . . we're seeing results that we never would have anticipated, and I think it does come down to the co-location and the cohabitation of all these different, unique partners in proximity."

The immediate plan for BufferBox is to stay the course and continue building kiosks to add to the several now in operation in southern Ontario, including the five they recently placed in GO Transit stations. It's a process that will no doubt be further accelerated under the Google umbrella.

McCauley said Google's presence in Kitchener-Waterloo played a deciding role in the company's decision to make a deal with them.

"A big part of this whole decision was for us to be able to remain here and remain part of the ecosystem and give back," he said, "because that's the only way we're going to continue to make it better."

Anthony Reinhart is Communitech’s Editorial Director and a former newspaper journalist. He held staff writing positions at the Guelph Tribune, Waterloo Region Record and the Globe and Mail before leaving the Globe to join Communitech in 2011.
Apps Factory Presents: Jason Davitsky
News home
PPE: A sprint followed by a marathon