BlackBerry and Beyond: Wireless Group all-stars stick together in search of new opportunities 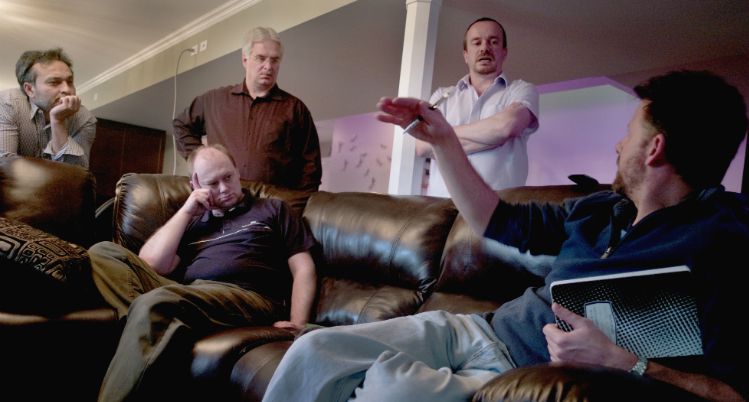 Ten men settle into the man cave in the basement of a grey-brick backsplit west of Waterloo.

In front of the big screen hanging from the ceiling, one of them cradles a remote and is ready to start the show.

Some other blood sport? Not even close.

But while the ideas are interesting enough, the real magic isn’t on the screen — it’s in the group planted on and around the leather couch.

Until recently they formed an all-star team in the world of wireless computing.

All were senior leaders of BlackBerry Wireless Group, the band of tech gurus that helped thrust what was then called Research In Motion to global stardom.

In mid-March, BlackBerry wound down the 120-member wireless group after deciding to outsource some of its research and development. But instead of scattering to the wind, the group’s senior leadership team decided to stick together.

They approached Andrea Gilbrook of Communitech’s Tech Jobs Connex program – herself a former BlackBerry employee – to find out how they could benefit from the program, which helps former employees of the tech giant find new opportunities.

During a recent meeting, the man wielding the remote keyboard led the group dissection of startup ideas.

In some ways — as ideas and solutions were pitched and probed — the meeting resembled their huddles in the old BlackBerry 2 building at the corner of Phillip and Columbia streets in Waterloo.

In other ways, it was much different.

A sliding glass door looked onto a kids’ play set and hedges separating the backyard from a farm field. Birdsong nearly drowned out the distant hum of traffic.

And unlike their previous talks, which focused on technical issues to make BlackBerry devices work smoothly with carriers around the world, the buzz in the basement cut a broad swath of startup concerns.

Who’s already in the space? What about venture capital? Business structures? Profit margin and development timeline?

“This is fun,” said Fraser Gibbs, who spent 14 years developing cellular modems for BlackBerrys. “It exercises different parts of your brain than you’re used to.”

Yet the excitement of new adventures rides on a sea of serious undertone.

“We all have families,” Gibbs said. “People have got to eat.”

Second, they’re striving to draw tech companies to Waterloo Region in hopes of keeping as many ex-BlackBerry wireless members here as possible.

It took a decade to build the team of highly skilled, niche experts.

“If you allow that to split up, it will take 10 years to build it again,” Tod said.

After the layoff, most of the leadership team wasted no time in getting together. The group’s former vice-president came late to the team after staying behind to wrap up operations at BlackBerry. Another senior manager participated in early talks with the team, but left to work on a startup with her husband.

Those who remained got down to work.

Using Google Docs, they set up an online storehouse for resumes that could be viewed by potential employers. The team also set up several private groups on LinkedIn, including BWG Job Seekers and BWG Alumni. Progress reports were posted weekly.

They also identified about 70 companies and individuals that teammates could contact for potential work. They divvied up names and started cold calling and kick-starting conversations about potential projects. Whenever somebody got a nibble, everyone dropped what he was doing and focused on crafting the best pitch possible, then delivering it within 24 hours.

After a few weeks of beating the bushes the team decided to meet daily, for two weeks, in Tod’s basement to brainstorm ideas for startups.

During the entire process, the men discovered talents they didn’t realize they had.

But despite their technical smarts and experience and motivation, one thing became clear throughout the job hunt:

As you might expect from people with loads of brainpower at their disposal, they knew where to find help.

Within days of being laid off they called Andrea Gilbrook in the Tech Jobs Connex office at Communitech.

Gilbrook wasn’t a stranger – she had worked as a recruiter in BlackBerry’s human resources department. For four years, before she was laid off in November 2013, she recruited talent from around the world to BlackBerry’s wireless group in Waterloo.

“These were my people,” Gilbrook said.

The leadership team called her to see what support Communitech and its provincially funded Tech Jobs Connex program could offer.

As a first step, individuals met with employment counsellors, one of whom had also worked for BlackBerry, for assessments of their strengths and needs. More than 1,000 ex-BlackBerry workers have used the service since Tech Jobs Connex launched in late 2012.

Gilbrook arranged for the leadership team to meet with Iain Klugman, Communitech’s President and CEO, and a startup coach.

Communitech provided meeting space for the leadership team and delivered a two-hour boot camp on how to use a screening tool, called Lean Canvas, to assess the pros and cons of startup ideas.

And when the leadership team attracted the attention of a large tech company in Asia, Communitech opened its doors from 9 p.m. to midnight and facilitated a conference call with overseas executives.

Gilbrook said it was the first time Tech Jobs Connex opened after hours to broker such a call. But it’s not the first time a local leadership team stuck together after a layoff. That’s exactly how Waterloo-based Sandvine, a global company that creates solutions for communications service providers, was born.

Sandvine launched in June 2001 after tech giant Cisco pulled the plug on its holdings in Waterloo just months after acquiring PixStream, a local startup, for $554 million.

So Communitech set up a meeting between Waterloo Wireless Group’s leadership team and Dave Caputo, Sandvine’s co-founder, president and CEO.

Caputo retraced Sandvine’s journey from layoff to startup to growing into an international, publicly traded company of about 500 employees.

“He walked them through the story,” Gilbrook said.

And five weeks after the BlackBerry layoff, Communitech hosted a gathering for the untethered wireless workers.

About 75 of them got together for the first time since being let go. They munched pizza, sipped drinks and reconnected. And after Tod updated the assembly on the leadership team’s volunteer work on everyone’s behalf, the applause was more than merely polite.

“It was really uplifting for a lot of people,” said Gilbrook. “I felt there was a lot more hope in the room.”

Nearly two months after the layoff, the Waterloo Wireless Group entered its next phase.

Tod landed a role as a vice-president of engineering at Clearpath Robotics in Kitchener, but says he’ll continue to volunteer with the wireless leadership team. The LinkedIn groups are still active. And with Communitech’s help, some leadership team members are pursuing startup ideas that emerged from their basement brainstorming sessions.

But no matter where they land, it will be with the help of Communitech’s staff and local tech industry experts who have been willing to share their expertise.

“They can bring you support when you’re most vulnerable,” Tod said.