BlackBerry and Beyond: Husband-and-wife team swift to launch two startups 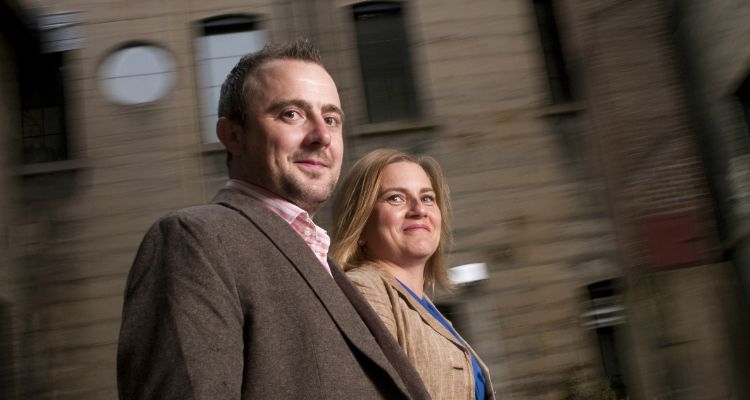 As an executive at BlackBerry during the tech-giant’s restructuring, Anthony Middleton was involved with the planning that impacted many of his colleagues.

Not surprisingly, the U.K. native, who served as a radar operator in the Royal Air Force, could see more unsettled weather on the horizon. So in February, after nearly 11 years circling the globe on BlackBerry business, he took his leave to pursue new opportunities.

“It really is daunting being on the other side,” Middleton said in a recent interview at the Tannery in downtown Kitchener.

Middleton remembered the first time he walked into the Communitech Hub all abuzz with upstart entrepreneurs.

“I felt like a new kid going to high school,” he said.

Lara Swift, his wife, recalled “you didn’t feel quite so cool.”

The couple has spent a lot of time together lately.

Soon after Middleton ventured out on his own, Swift was laid off from her director’s job at BlackBerry.

The mid-life change in course has given them more time with each other and with their six-year-old son. But they don’t have as much time to take it easy as you might think.

“A month of doing absolutely nothing would have been really nice,” Swift sighed.

But now, as Middleton and Swift get two startups off the ground, work time is family time.

After leaving BlackBerry, the couple quickly ruled out working for another large tech company.

Instead, Middleton launched Swift Mobile Solutions to develop web-based software and wearable technology for the health and fitness industries. And together they co-founded Swift Labs Inc., a company that provides services to businesses developing products using wireless communications, or require regulatory compliance for their hardware.

Before working at BlackBerry, Swift worked for Nortel during its dramatic downsizing.

“After the second time, I really need to do something different,” she said.

Middleton said he also was ready to move on from working for a large corporation.

He recalls laying off fellow co-workers — some were close friends.

But he didn’t want to continue business as usual.

In running their own startups, Middleton and Swift relished the chance to employ some of their former workmates.

Of course, not everyone is suited to launch a startup.

“To me they’re a perfect match,” said Gilbrook. “I can see it working.”

Gilbrook worked with Swift at BlackBerry before herself being laid off in November 2013.

“Very hungry to do something significant,” Gilbrook said. “He had that fire in his belly.”

“She has the drive. She gets stuff done,” Gilbrook added. “She could execute his vision.”

Middleton got an instant boost.

During their first meeting, Legge introduced him to a potential customer and, since then, to more than half a dozen others.

Because of the huge pool of talent working heads-down at BlackBerry, and the sheer size of the company, ex-BlackBerry employees led relatively insulated lives. Legge said they know Waterloo Region’s startup ecosystem exists — partly because BlackBerry helped spawn it — but many of them don’t know how big it is.

So, often they need introductions to people working throughout the startup community.

Having an overview of the goals that various companies and entrepreneurs are trying to achieve makes it easy for Communitech to make those introductions, Legge said.

Legge calls it “the pothole avoidance list.” The goal is to help entrepreneurs avoid costly pitfalls that can cause them to get discouraged and give up.

“The early stage can really be make-or-break for a lot of these companies,” Legge said.

But confidently, Middleton and Swift continue their launch as though they’re on a pre-destined mission.

“It was all timing and opportunity,” Middleton said of their startups. “Everything happens for a reason.”