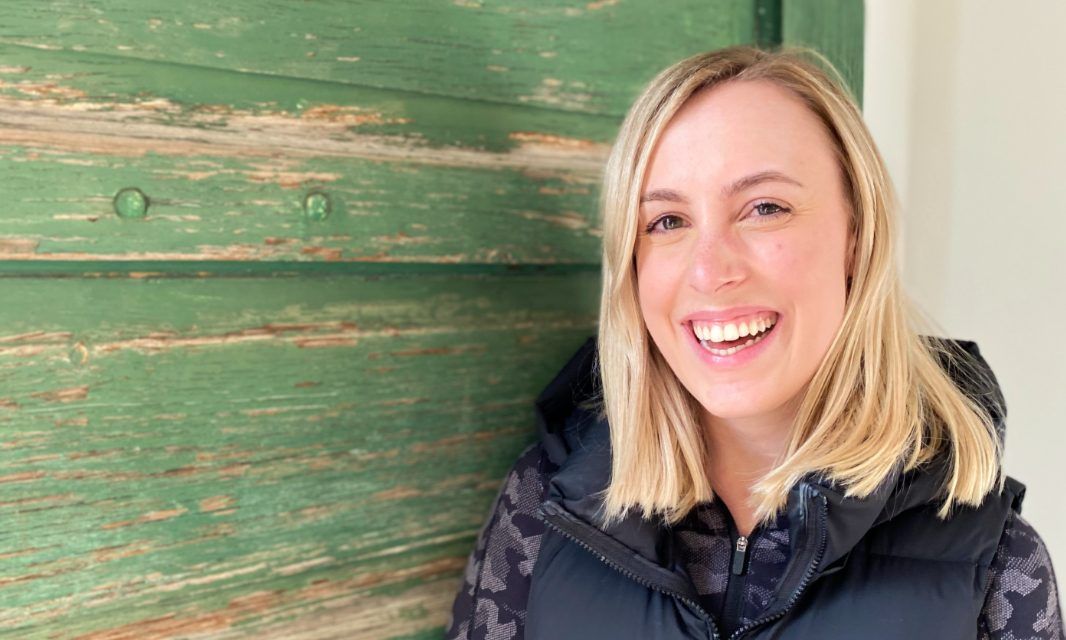 Kristin Kelly is a recent Ryerson University grad who works for the Greater KW Chamber of Commerce and a local startup, Orbits. ( Communitech photo: Jenna Aquino )

Picture this: You wake up and start an assignment for your Italian course before hopping into your team’s morning stand-up. An hour later, you’re in a lecture for your Strategy and Integration class. An hour after that, you’re writing an article, or applying to jobs, checking in with another team you’re on, meeting with a professor or taking a break to go for a run, chasing endorphins and vitamin D to keep you going.

This is my current reality and it’s similar to that of many (if not all) of my peers – senior students and new grads alike. Whether we’re juggling the back-and-forth between school and work, a full-time job and a part-time one, an array of volunteer work or freelance gigs, our generation faces an abundance of competing priorities.

Don’t pity us, though; it’s not necessarily a bad thing. Generally, most of us enjoy dividing our attention between multiple projects. We’re all about embracing the age of information and a digital work environment that gives us the flexibility to pursue more than one passion at a time. It helps us stay curious and inspired.

It’s the challenge of cultivating an interdisciplinary mindset – one that allows you to cognitively “shift gears” in a matter of moments, without getting overwhelmed – that deserves a conversation.

To help me validate some of these opinions, I spoke with Kristin Kelly, a new grad working with the Greater KW Chamber of Commerce as a Marketing Co-ordinator, and with a local startup, Orbits, as a Social Media Manager.

Kelly graduated from Ryerson’s Professional Communication program in the middle of the pandemic last spring and still managed to move through multiple positions in her industry, winning a gold medal in her field while she was at it.

“Being able to switch on and off between multiple jobs isn’t easy. But, I think we can continue to train our minds to know how to turn on and off when we need to,” Kelly said. “The more we do that, the more we end up setting boundaries for ourselves and learning how to shift between priorities in a healthy way.”

I agree that this is a mindset we need to strengthen as we embrace hybrid models of work. We’ve lost the familiar partitions between our personal and professional lives, but at the same time, we’re gaining the capacity for more nuanced ways of thinking and working.

For Kelly, launching a successful career has a lot to do with bringing mindfulness to your work, knowing that it’s OK to make mistakes, learn, and adjust your priorities as you go.

“I’ve struggled with perfectionism for a long time and I used to really let that define me. I would let such small mistakes scare me … it’s easy to get consumed by that and spiral downward,” she said. “I think the reason I can balance different jobs so well is because I’ve learned to look at the bigger picture; to sit with those thoughts and then be able to drop them and move on with my day.”

I think this is a great way we can support each other in this new world of work. The culture we’re building, digital as it may be, should be one that celebrates vulnerability, authenticity and making mistakes. That fosters a sense of trust and understanding within our teams.

As Kelly put it, “It’s important to know that the people you work with genuinely support you and want to see you succeed.”

She went on to share that when you’re seeking balance between your (now overlapping) professional and personal lives, it’s important to reassess who is around you. Are you working with leaders who inspire you? People who truly believe you are inherently valuable and have a lot to offer? Too many people take on multiple gigs out of a desire to prove themselves to an overly competitive society and wind up facing a lack of appreciation from the people they’re working for.

“I’ve learned that, above all, you can’t just add stuff to your plate without having any passion behind it, no matter how much people tend to glamorize “hustle culture.” Don’t keep busy for the sake of keeping busy. Take on things that energize you and make you happy. Work with people who lift you up,” Kelly said.

She also talked about having learned there is power in the ability to say no to things; that the more you learn when and how to say no, the better you’ll be at knowing your limits and avoiding burnout.

“I think there's this inherent sort of thing that happens when you’re taking a step back or there is a gap in your resume for whatever reason. People fear being seen as a failure, or as lazy … but I’ve found that, more often than not, your colleagues will actually respect that decision and your ability to voice it. If they don’t, it says a lot about them and the company’s culture,” Kelly said.

Our conversation wrapped up with a discussion of the stigma around the Gen X, Gen Z and Millennial groups – people who care about setting boundaries, taking time to travel, looking after their mental health. Speaking from our experiences, that stigma often comes from more traditional generations spinning the narrative that you could always be working harder, or that “sticking it out” should be a point of pride.

“I’ve learned that you can’t always just “stick it out,” because in some cases, it will drain you, and that’s not worth it," Kelly said. "That’s not how you grow."

Jenna Aquino is a University of Waterloo student working her third co-op term at Communitech, among many other things. She writes about the future of work from a Gen Z perspective.